The list keeps getting bigger. There is no easy way to spin the idea of the SpeakOut movement, which has rocked the wrestling world in a major way. Women (and some men) have spoken out in droves over their treatment over the years, with stories about several kinds of mistreatment at the hands of wrestlers or people involved in the wrestling industry. Things started on Thursday and kept going on Friday.

Much like Thursday, there are several stories and this selection is by no means exhaustive. Reading the individuals tweets will give you a more detailed version of the situations.

Several more names faced allegations on Friday, along with some who had been previously accused and responded to statements made against them. New wrestlers accused of such conduct are NXT UK’s Wolfgang (accused of emotional abuse and taking photos of schoolgirls in uniform) and Impact Wrestling’s Michael Elgin (accused of sending unsolicited nude photos) and Joey Ryan (accused of groping a female wrestler). None of the three have responded to the claims.

Who wants to see Mike Elgins dick pic? I still have the convo, unwanted photo, and emails he tried to send me under a fake name in 2016. @JordynneGrace tried to help me bring this to light when his first scandal came out but the wrestling media didn't care #SpeakingOut

One of the biggest names accused so far is Velveteen Dream. This comes a few months after Dream was previously accused of sexual misconduct with an underage girl who alleged that Dream sent her an explicit photo. Dream is now accused of communicating with underage boys and asking them to send them nude photos or videos. Both boys say that Dream was incredibly secretive about their discussions and that neither were ever physically involved with him.

Here you can see a better case of the grooming. I mentioned wanting to hang out with him because I thought it would be cool and you can see him having alterior motives at my vulnerability. pic.twitter.com/acO5Z8cTeO

i was asked to post some more screenshots from a victim. don’t bother defending velveteen in my mentions cause I’m just gonna block and hide your comment ?these are a few of MANY!

there’s over 70 that haven’t been shown pic.twitter.com/1geZOz9Mxt

The biggest name to be mentioned on Friday is Matt Riddle. A female wrestler named Candy Cartwright has accused him of forcing her into a sex act in May 2018 in the back of a van with various other wrestlers asleep around them. Cartwright says that she did so to get out of having sex with Riddle, as he had previously requested. When she originally said no, Riddle allegedly choked her and threatened to force himself on her.

Riddle’s attorney issued a statement refuting the allegations and saying that Riddle and his wife had accused Cartwright of stalking them. This included drafting a request to a court for an injunction against Cartwright for cyberstalking them. This seemed to change WWE’s position on the situation, as Riddle’s SmackDown debut was removed from the official WWE.com preview for the show before being returned. Riddle would debut on the show as scheduled.

I’m posting this because I have been so sad for so long. I didn’t realize that what he did to me was not ok. I realize now, reading these other brave women’s stories, that I can’t be afraid anymore and I have to #speakout

Back in May of 2018 I was riding with Matt Riddle and a few other wrestlers. During the van ride, when the 3 other wrestlers had fallen asleep, Matt asked me to “hop on his dick”. When I refused (although we had previously been together I was

incredibly uncomfortable in that setting ) When I said no, he grabbed me by my throat, choked me and said “what if I just made you?” I ended up giving him oral sex (praying someone wouldn’t wake up) to get out of having intercourse with him. It was incredibly humiliating.

It is never ok to put your hands on a woman, it’s also not ok to not listen when she says no.

Finally, NXT Cruiserweight Champion Jordan Devlin responded to the allegations that he physically abused wrestler Hannah Francesca while they were dating. Devlin made a series of posts on Twitter denying the allegations and saying that it was a personal attack on him taking place while several women were telling their true experiences. He is working with a legal team to determine his next step.

I didn't even want to address the hurtful allegation made against me, but for the sake of my followers and friends on this platform that may for whatever reason be unsure, I'm going to address this once.

The recent allegation made against me is completely and utterly false and I deny it entirely. This is a case of a malicious personal agenda being executed against me on the back of a very brave telling of true experiences by other women. I completely denounce it.

This is all I will say on the matter, and I am now working with a legal team to help decide how to proceed from here.

I think we can all use a pallet cleanser now. Check out some of the lighter side of wrestling:

Opinion: I have no idea what to even think about these things anymore. You really do get numb reading them over and over and that is going to get worse every day. This isn’t the kind of story that is going away and I’m not sure where it is going to end. The biggest part to remember is that we have no idea how many more names are going to come up in this whole thing. There is no way of knowing where it ends and it is likely to get a lot deeper before we come close to wrapping up anything.

What do you think of the whole situation? What will happen to those accused? Let us know in the comments below. 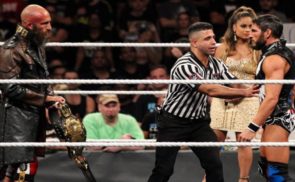