WATCH: Surprise Return At The End Of AEW Dynamite

Welcome back to AEW. The wrestling world is starting to settle back down after the SpeakOut movement made some big changes to how things worked. A lot of wrestlers were moved around in various ways, with some careers likely being ended as a result of the stories that came out. That is not a bad thing given what some people have admitted to doing, but some are going to be back after some time away and that was the case this week.

Since AEW’s inception, the Inner Circle has been one of the biggest stories the show has seen. The group has a great variety of stars, with the legend in Chris Jericho, the muscle in Jake Hager and the great tag team in Santana and Ortiz. That is the kind of lineup that can work in any situation, but there has been something lacking in the last few weeks. The problem has since been fixed.

This week on AEW Dynamite, Sammy Guevara made his return after several weeks away. During the main event, Serpentico jumped over the barricade and attacked Luchasaurus with a baseball bat to give the Inner Circle the win. After the match, Serpentico unmasked as Guevara and celebrated with the team. This was one month to the day after Guevara was suspended over comments he made about Sasha Banks before signing with AEW.

That’s how you make a comeback. Check out Guevara’s return:

Opinion: This is the kind of thing that was all but guaranteed to happen at some point as Guevara is one of the most promising young stars that AEW has. What he said was not good in any way and he deserved to be gone for a bit. AEW seems to think that he’s ready to be back though and if that is the case then so be it. Guevara can do a lot of good things in AEW and if he can avoid saying something dumb, he’ll be more than fine.

What do you expect from Guevara? How big of a star can he become? Let us know in the comments below. 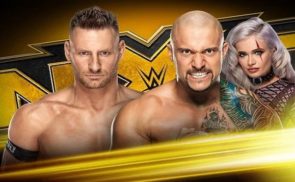