We’re in Full Sail again and since Summerslam is right around the corner, there is a good chance that we are coming up on another Takeover as well. I’m not sure what NXT has planned, but they have a tendency to be able to do a lot of good things when they know they have a big show coming up. Let’s get to it.

William Regal welcomes us to the show and talks about Keith Lee’s career defining win two weeks ago. With that, he sends us over to Lee for an announcement.

Lee talks about doing everything his trainer told him that he would do and now he is on top of the world. All it took was an opportunity, and that’s what he wants someone else to have. Therefore, he is vacating the North American Title so someone else can have a chance.

Dain runs him over to start but Lumis looks up at him for the mind games. Lumis sends him outside and keeps crawling around to stare at Dain until he drags Lumis outside. Some right hands have Dain in trouble so he whips Lumis at the steps….and Lumis dives over them. A running crossbody crushes Lumis on the floor though and Dain sends him head first into the Plexiglas a few times. Back in and the middle rope Fameasser connects on Lumis for two as we take a break.

We come back with Lumis fighting from his knees so Dain kicks him in the face. Lumis catches him with a spinebuster for two, but Dain dropkicks him into the corner for the Cannonball. A powerbomb into an elbow gets two on Lumis and frustration is setting in. Lumis is right back with his sitout Side Effect and a Swanton connects. Another Side Effect sets up the Silencer to knock Dain out at 10:42.

Roderick Strong says he’s ready to get the Undisputed Era back on track and should be in the ladder match because he never got a rematch. Bronson Reed and Johnny Gargano come in to disagree.

Ever Rise vs. Breezango

Since Ever Rise are from Quebec, Breezango are dressed as Mounties. Breeze headlocks Parker to start and takes him down, allowing him to lay across the top rope. Back up and Parker bails away from the threat of a Supermodel Kick so Martel shouts DEFENSE from the apron. That earns him the Supermodel Kick, allowing Martel to jump Breeze from behind and RIP UP THE MOUNTIE UNIFORM!

It’s Breeze getting caught in the corner but flipping out of a belly to back suplex without much trouble. A hot tag brings in Fandango for a Canadian legsweep. Fandango goes up top for a saluting splash onto both of them. Back in and a double superkick finishes Parker at 3:26.

Result: Breezango b. Ever Rise – Double superkick to Parker (3:26)

Shotzi chases Robert Stone off before the match and says WELCOME TO THE BALL PIT. The bell rings and Shotzi takes Aliyah down again, setting up another WELCOME TO THE BALL PIT and the legdrop between the legs. Blackheart misses a charge through the ropes though and gets sent face first onto the floor. Back in and Aliyah gets two off a northern lights suplex, setting up the camel clutch. Shotzi fights up without much trouble and hits a corner splash.

The kick to the head sets up a snap belly to back suplex for two. Aliyah goes basic by stepping on the foot and grabbing a rollup, with feet on the ropes, for two more. The referee doesn’t like the cheating and Shotzi uses the distraction to hit an enziguri. A tiger suplex plants Aliyah but Stone gets on the apron. That earns him a kick to the face, meaning a lot of screaming over the injured ankle. Back in and the top rope backsplash finishes Aliyah at 4:41.

Post match Shotzi gets in the tank and runs over the leg again, but Mercedes Martinez comes in and beats her down as Stone looks stunned.

Video on Isaiah Scott. He likes making music and was honored to be in the ring with Johnny Gargano at the Great American Bash. Now he wants the Cruiserweight Title.

Strong and Gargano are knocked outside early on and they argue over who has to go back inside and face Reed. They eventually both get back inside and the double teaming doesn’t work either, with Gargano having to save Strong from a World’s Strongest Slam, only to have Strong kick him in the head by mistake. We take a break and come back with Reed crushing both of them in the corner, setting up a running hip attack to send Gargano outside.

Strong cuts Reed off with a running knee to the face though and this time it’s Reed getting beaten down in the corner. Now the double teaming works for a change, but Strong has to kick Reed in the knee to cut off a comeback bid. Instead Reed sends them together and runs them both over, only to get caught with another knee to the face. Reed is sent outside for a suicide dive from Gargano. Back in and Gargano gets caught in a double underhook backbreaker for two but the Stronghold takes too long to set up.

Reed is back in to run people over, including a backsplash for two on Strong. An Angle Slam plants Reed though and, after Strong sends Gargano outside, he gets a quick two. Reed gets tied in the rope for a superkick but Strong catches Gargano in another backbreaker. That lets Strong hit the running forearms to Reed until Gargano sends him outside. The two of them fight on the floor until Reed takes them both out with a suicide dive.

We take another break and come back with Reed getting angry and putting them both in a fireman’s carry at the same time. That means a double Samoan drop but Gargano breaks up a superplex attempt on Strong. Instead, Gargano goes up top and is quickly caught in a Doomsday Device. That’s countered with a reverse hurricanrana as Strong misses the top rope clothesline to put all three down.

Reed goes to the apron and Gargano slides outside, with Strong dropkicking Reed into a powerbomb onto the floor. Back in and Strong faceplants Gargano for two but Gargano headscissors him into the Gargano Escape. That’s countered into a Stronghold attempt, which Gargano reverses into the Lawn Dart. Strong hits a big gutbuster but Gargano is right back with One Final Beat. Before the cover, Reed comes in off the top with the splash to crush Strong for the pin at 20:50.

They go straight to the grappling with Thatcher grabbing a front facelock. Lorcan reverses into an armbar as they get back to their feet. Thatcher hits him in the face and grabs the leg, only to have Lorcan chop away to get a breather. A takedown sets up a chinlock before it’s off to something similar to a seated abdominal stretch.

The bow and arrow goes on for a bit before Thatcher switched to a Kimura, sending Lorcan to the rope. Back up and Lorcan hits the running elbow to put Thatcher on the floor. Thatcher gets posted hard and we take a break. Back with Thatcher grabbing another armbar but a crossface chickenwing is countered and Lorcan gets his own Kimura.

With that broken up, Lorcan rolls into a half crab and switches into a Fujiwara armbar. Thatcher fishhooks his way to freedom and it’s back up for a strike off. Lorcan gets in the half and half suplex for two, followed by another standing armbar. He pulls Thatcher down…and right on top of himself to give Thatcher the pin (with trunks) at 14:06.

Result: Timothy Thatcher b. Oney Lorcan – Pin with a handful of trunks (14:06)

Mercedes Martinez comes up to Robert Stone and says she needs someone who can handle everything outside of the ring. Stone gladly shakes her hand and celebrates.

Finn Balor is ready to take an opportunity and wants the North American Title. Next week he’s in a qualifying match with Dexter Lumis and Timothy Thatcher.

Scarlett handles Kross’ introduction as only she can. They stare at each other before going into the power lockup with Dijakovic taking him into the corner. That earns Dijakovic a kick to the ribs and a front facelock as things slow down. Dijakovic reverses into Feast Your Eyes but that’s reversed into the Doomsday Saito. That’s broken up as well and Kross is sent outside, where his right hand hits the Plexiglas instead of Dijakovic. The Cyclone boot rocks Kross but he’s right back with a DDT to send us to a break.

Back with Kross hitting the Doomsday Saito for two but Dijakovic forearms the heck out of him. Dijakovic slugs away and hits the toss suplex. The sitout chokeslam gets two on Kross and he heads outside, with Dijakovic hitting the big flip dive. Kross is back up and sends him HARD into the steps, with Dijakovic out cold and half underneath the ring.

Not entirely patient, Kross throws him back inside, where Dijakovic remembers what planet he’s on. Some big forearms connect to keep Dijakovic down but here’s Keith Lee to glare at Kross. Lee tells Dijakovic to stay down but Kross sits on his chest and forearms him again. Dijakovic tells Lee no and is choked out with ease at 13:30.

Referees check on Dijakovic and Lee glares at Kross to end the show.

WATCH: Surprise Return At The End Of AEW Dynamite 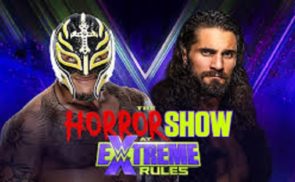