VIDEO: Tick Tock: WWE May Have Just Dropped A Big Hint About A Debuting Superstar

Hint hint. WWE has a lot of wrestlers under its banner and keeps bringing in more and more almost every single month. That can cause WWE some trouble in figuring out a way to get these new wrestlers onto the show, but they are only so many ways to make room for them. More often than not, these debuts take place down in NXT, but that may not be the case this time around.

Every now and then, you find a wrestler who is not so much known for their in-ring skills but rather more for what they can do both with charisma and character work. Those are often more effective as fans tend to remember something they hear in a promo than see in a match, which opens the door for some people who might not be as sharp from bell to bell. WWE may be telegraphing the debut of a character who can make a huge impact in a hurry.

During this week’s SmackDown, the video feed seemed to glitch, showing what appeared to be a ticking clock. There is no word on what this means, though Killer Kross, who was recently confirmed as being signed by WWE, is known for saying “tick tock” as his catchphrase. Kross was released from Impact Wrestling last year and was announced as signing with WWE on February 4.

That’s what it looks like. Check out the glitch, plus a look at Kross in the ring:

Opinion: Kross is someone who could make an impact in a hurry so it is cool to see that he might be debuting sooner rather than later. It isn’t completely sure that the symbol is him, but it would be odd to see it wind up being anyone else. Have Kross as a monster and someone who can be one of the more unstoppable villains in WWE and they might have something with him.

Do you think it is Killer Kross? When do you see Kross debuting? Let us know in the comments below. 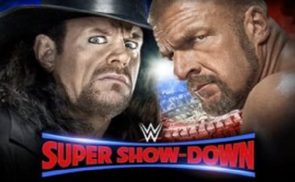 REVIEW: Super ShowDown 2018: This Can Work