We’re done with Takeover: Portland and that means it’s time to get ready for Takeover: Tampa, which is coming up in a hurry. The big story is Johnny Gargano costing Tommaso Ciampa the NXT Title against Adam Cole, likely setting up the final showdown in Tampa. Other than that, we probably need to get some stuff set up for the big show. Let’s get to it.

We open with a recap of Takeover, which switches over to a preview of tonight’s show.

Here’s the Undisputed Era to get things going. Adam Cole talks about destiny and Tommaso Ciampa getting his answer about being a champion. That answer was undisputed as the Era continues to show that they are dominant around here. Tonight, Roderick Strong can continue showing that against Velveteen Dream. Cue Dream’s voice, saying that Strong can prove himself by leaving his boys in the back. Dream: “Do it for Marina.” Strong says he’ll make Dream wish he never came back.

We look at Gargano costing Ciampa the title.

Devlin is defending and drives him into the corner to start, only to get sent outside. Back from an early break with Devlin hitting a jumping knee to the face and then kicking Rush in the head. The release Rock Bottom sets up the standing moonsault but Rush gets his knees up. A release half and half suplex gives Devlin two and he knees Rush in the ribs for the same.

The camel clutch works on the ribs a bit more, followed by some kicks to the face as Nigel is rather pleased. Rush tries to fight back with the springboard Stunner but Devlin plants him with a backbreaker. A jawbreaker drops Rush again and we take another break. Back again with Rush hitting a high crossbody for two but Devlin hits a cutter to send Rush outside.

Devlin plants him with a standing Spanish Fly back inside but Rush is back up with a super reverse hurricanrana. The springboard Stunner for two sets up the Final Hour, which only hits mat for the big crash. Devlin headbutts him into the Devlin Side to put Rush away and retain the title at 18:34.

Reina Gonzalez says she saw something in Dakota Kai because she knows what it means to be left on the sidelines. Together, they are unstoppable. William Regal comes in to tell Kai that she faces Tegan Nox in a cage match in two weeks.

Rhea Ripley says the queen is having a nightmare at Wrestlemania.

Here’s Austin Theory for a match…and never mind as here’s Ciampa with a mic to talk about Takeover. Theory glares at him but Ciampa says not tonight. Ciampa talks about how was so focused on Goldie that he missed the signs of what was coming. It’s always been about Johnny Gargano and he isn’t even asking himself why Johnny why. Theory tries to break this up and gets punched in the face. Ciampa knows that if he wants his life back, there can be no Gargano in NXT. That sounds ominous. Theory goes after him again and Ciampa leaves him laying after a beating.

Wilde dropkicks Gibson but Drake is right there with a cheap shot from the apron to turn that around. Drake comes in so Wilde turns up the pace and gets two off a crucifix. It’s already back to Gibson who takes Wilde down, setting up a toss to the floor. The slingshot forearm/backbreaker hits Wilde and the chinlock goes on back inside.

Wilde fires up and hits a moonsault out of the corner, allowing the tag off to Mendoza. Everything breaks down and it’s Gibson getting in a shot to Mendoza’s throat. A suplex drops Mendoza again and Drake dropkicks Wilde to the floor. Mendoza tries a headscissors but gets spun into the Ticket to Mayhem for the pin at 4:34.

Post match Gibson insults the fans and says they’re here to take over and be recognized as the best in the world.

Here are the Broserweights for their big celebration, including a trip through the crowd and a lot of fist bumps. Matt Riddle isn’t sure where the golf cart is but Pete Dunne says Riddle got it impounded. That doesn’t matter though because they’re the Tag Team Champions. Riddle says Dunne is a machine, but the Dusty Cup partied too hard and got Wellnessed for thirty days. Riddle: “It’s a thing here. It’s a thing here.”

Non-title. Dunne and Burch start things off with Dunne taking him down into something like a bow and arrow. That’s broken up in a hurry but Burch can’t stomp on Dunne’s hands. He can however spin out of an armbar attempt and try a failed Crossface, giving us a standoff. Riddle and Lorcan come in with Riddle riding him on the mat. Everything breaks down in a hurry and the champs hit some quick suplexes to take us to a break.

Back with Lorcan holding Riddle in a half crab, which he switches into an STF. That’s broken up in a hurry and it’s Dunne coming back in for some stomps onto the fingers. Burch blocks an armbar though and rolls Dunne up for two, only to have both partners come in for the break. Riddle no sells a German suplex so Burch clotheslines him into the Crossface.

Dunne flips out of another suplex and breaks up the hold to put everyone down at the same time. The tag brings Dunne in Legally for an enziguri to send Burch into the corner. That means Lorcan can come in for a running Blockbuster to put Dunne down. Dunne is back up and snaps the fingers though and it’s the Bitter End/Final Flash combination to finish Lorcan at 11:03.

Roderick Strong tells the Undisputed Era that he needs to do this himself.

The Forgotten Sons don’t like the Grizzled Young Veterans coming to their country and talking trash. They’ll fight for AMERICA.

Non-title. Lee runs him over before the bell, says ring the bell, and finishes with the Big Bang Catastrophe at 12 seconds.

Post match, Dominick Dijakovic comes in to say he had Lee beaten at Takeover. All Lee hears is a bunch of excuses, but the fans want to see them fight forever. Based on that, maybe Dijakovic can talk him into another match.

Robert Stone introduces Green as the face of the women’s division. Carter grabs a quick rollup for two but doesn’t have quite the same magic as she did last time. Green gets knocked into the ropes and a low superkick gives Carter two more. Back up and Green runs her over for two, setting up a camel clutch.

Carter’s throat is sent into the middle rope for two and Green stands on her hair. With that going on, here’s Bianca Belair with a mic to call out Charlotte for jumping her at Takeover. It doesn’t even matter if Charlotte doesn’t go here. Green gets some near falls off a few rollups but Carter hits a superkick to send her outside. Stone trips Carter up though and it’s a reverse Unprettier to give Green the pin at 4:46.

Next week it’s Ciampa vs. Theory and Finn Balor is here.

Dream is in a blue full body suit. Strong takes him up against the ropes to start but Dream comes back, sending Strong outside for a breather. They switch places as Dream keeps playing the mind games but Strong gets in a poke to the eye (which makes Beth gasp). The strikes begin to put Dream in trouble, followed by the first backbreaker.

They head outside with Dream getting sent back first into the barricade and then the steps for a bonus. We take a break and come back with Dream fighting out of a sleeper. They ram heads in the corner for a breather and it’s Dream hitting his own backbreakers. A middle rope ax handle lets Dream knock him into the ropes but it’s too early for the Dream Valley Driver. Strong is back with a backbreaker onto the turnbuckle for a close two but Dream knees his way out of a suplex attempt.

Instead, Strong takes him down into the Strong Hold and cranks back for a bit. That’s broken up as well with a kick out to the floor and it’s Dream hitting a superkick. The Dream Valley Driver connects and indeed the suit comes off, revealing the Marina Shafir tights (without their son). Dream goes up but has to dive onto the invading Era, allowing Strong to knee him out of the air. That doesn’t matter much though as a second Dream Valley Driver finishes Strong at 15:38.

Post match the Era is on Dream immediately and the beatdown ends the show. 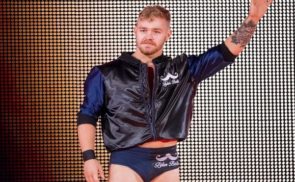 That’s Never Good: Tyler Bate Injured And On The Shelf For The Time Being