Titles are one of the most important things in a wrestling company. There are all kinds of gold (and silver) floating around almost every wrestling promotion and there always will be. No matter how weakened a title becomes, it still remains one of the central pieces of a company. It isn’t a hard concept to figure out: the best wrestlers have something that proves they are the best and other wrestlers want them. The titles are glorified trophies, and now some specific ones are getting some extra attention.

The WWE Women’s Tag Team Titles were introduced (or reintroduced depending on how much of a history geek you are) back in February 2019. Sasha Banks and Bayley went on to win the inaugural titles inside the Elimination Chamber….and that’s about it for the titles’ highlights for the first year or so.

At least the win was historic:

It was clear that there just wasn’t much of an interest in the titles, but more importantly, the depth just wasn’t there. That was a real problem and there was almost no way around it: with so few teams fighting for the titles, there wasn’t much of a point to keeping the titles around. That has never stopped WWE though and the titles dragged on, despite no one actually defending them or seemingly interested in going after them no matter what happened.

The lack of interest droned on and on for months until we finally reached a big match at Tables, Ladders And Chairs 2019 with the Kabuki Warriors defending the titles against Charlotte and Becky Lynch in a crazy TLC match. Then it was right back into the cooler again, as there just weren’t enough teams to challenge for the titles, no matter who was holding the belts.

Then things started changing, as the titles suddenly mattered again. Not only did were the titles defended at WrestleMania 36 when the Kabuki Warriors lost them to Nikki Cross and Alexa Bliss, but suddenly they were actually VALUABLE. Teams started fighting over them and treating them like they mattered. This included the new champions, former champions the IIconics, Bayley and Sasha Banks and even Tegan Nox and Shotzi Blackheart from NXT. It was like a division was starting to come together, which had been lacking since the titles were established.

What mattered more than that though was having teams fight over the titles. As it turns out, that is the key to making the titles (or any title actually) matter: have people fight over them because the titles are valuable. It really is that simple and yet various wrestling companies cannot figure that out at times.

Look at what you are currently seeing with the titles. They were defended at Backlash, they are on the line during this week’s NXT and they are going to be defended again on next week’s Monday Night Raw. Considering that following the Tables, Ladders and Chairs defense on December 15, the titles were not defended again until WrestleMania 36, which aired on April 4, it wasn’t like the titles were being treated with any kind of prestige or importance for months at a time. Going from one defense in four and a half months to three in eight days is quite the upgrade and a sign that things are improving.

The other big match:

As usual though, just having the titles being fought over for a few weeks doesn’t mean much in the long term. If this goes away after next week, then none of this is really going to matter all that much. What does matter though is WWE clearly knows how to do something like this and they could do it again. They don’t have to keep it going forever, but just having it go on for a little while would do wonders for the titles. Look at how much good it has done in just the span of a few weeks. Do you ever remember the titles seeming this important?

It never ceases to amaze me how simple this concept is and yet companies will manage to not figure it out. Impact Wrestling managed to screw it up horribly at Victory Road 2012 when Television Champion Robbie E. issued an open challenge and, at the time at least, no one came out to accept the free title shot.

It got really awkward standing around waiting on anyone to show up and while Devon eventually arrived and won the title, that stretch where no one was coming out to claim a title match made it feel as worthless as possible. I’m not sure why Devon took so long getting to the ring, but those few seconds were not exactly kind to the title and became something of a lasting image for the belt: it was something that sat around with no one even interested in a free shot.

That’s as good of an illustration as you can get: a title that wrestlers felt was so unimportant that no one was willing to come and get a free shot, to the point where the champ almost left by the time his challenger showed up. If that was as good as the title was able to do, why would I, as a fan, care about who held the title or what they were doing for it?

Even NXT wants them:

Compare that to the WWE 24/7 Title. The title debuted about thirteen months ago and thirty six people have managed to win it in that time, starting with a bunch of people literally running to the ring to try and grab the thing. Since then, all kinds of people have gone after the title at some point, from celebrities to legends to non-wrestlers to wrestlers to Santa Claus.

Then there is R-Truth, who has gone….well he was already insane, but he has now gone even further over the edge, and all because of his love for the title. A lot of people, including R-Truth, have gone after the title because it has some sort of value. The same thing was true of the Hardcore Title back in the Attitude Era and it wound up having a long life of its own as a result. It doesn’t even matter who is after it, as very few big names have tried to get the 24/7 Title, but enough people have gone after it to keep the thing alive long after it should have been gone.

I know I’ve talked about this before but it is the kind of thing that wrestling companies need to understand. They have so many titles running around on all of their television shows that they might not have enough time to take care of them, but you would think that some of them would know better. WWE certainly seems to be getting the hint with the Women’s Tag Team Titles, but it isn’t like they have the best track record. I’ll take what I can get while I can though, and that is what has made the last few weeks something to fight for. 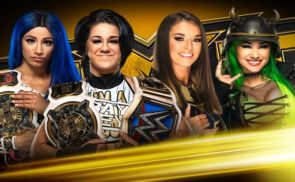