Welcome back and welcome back. There are a lot of wrestlers on the WWE’s multiple rosters and occasionally, some of them are going to come and go. That can make for some strange times if they are not there in person, but at times there is no way around it. When you factor in the chaos caused by the Coronavirus, it is no surprise that some names have been missing. Two of them were back this week.

WWE’s reaction to the Coronavirus has not been so well received. The company has done a few things here or there, but they only instituted a mask policy last week and several of their wrestlers have been diagnosed with the virus. That is not going to go well for some wrestlers and a few of them have not shown up. This is in addition to other, more run of the mill reasons wrestlers would not appear. That isn’t a permanent change though and it was reversed for two names.

Kevin Owens and Kairi Sane both made their returns this week on Monday Night Raw. Both participated in and won matches, as Owens teamed with Rey Mysterio to defeat Seth Rollins and Murphy while Sane defeated Sasha Banks via DQ. Owens had been missing since the June 15 Monday Night Raw over Coronavirus concerns while Sane had been gone since the June 1 show, when she was injured in a match against Nia Jax.

They made a big impact. Check out the double return:

Opinion: This is some good news to hear, but in the current climate, it is hard to say how long something like this is going to last. Owens does not seem comfortable with certain things the company has done with the Coronavirus and Sane seems to be leaving the company soon. Enjoy them while you can, as it was nice to have both of them back and doing something they do so well.

Whose return was better? What is next for both of them? Let us know in the comments below. 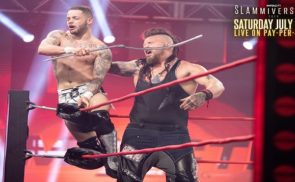