The Slammiversary shakeup continues as we need to find another replacement now that Michael Elgin is gone. This comes after World Champion Tessa Blanchard was released from the company, meaning the main event is looking quite a bit different than it did just two weeks ago. We should be getting some updates on what is happening here so let’s get to it.

Josh and Madison welcome us to the show and get straight to the big story: Slammiversary’s main event will now be a four way for the vacant World Title with Eddie Edwards vs. Ace Austin vs. Trey vs. a mystery opponent.

Johnny Swinger is here with Bey, who knocks Suicide into the corner to start. Bey is sent to the apron but slingshots in and hits some dancing. They run the ropes until Suicide snaps off an armdrag and does some dancing of his own. A dropkick sets up a Lionsault but Bey gets his knees up. Bey clotheslines him down for two but Suicide is right back with a modified Octopus.

That’s broken up so Bey ties him in the ropes for a spinning kick to the head. The middle rope moonsault only hits mat though and Suicide dropkicks him into the corner. A running kick to the face connects and Bey is sent outside, with Suicide trust falling onto Bey and Swinger. Back in and Suicide’s belly to back faceplant connects, but Swinger shoves Suicide off the top. The springboard Fameasser gives Bey the pin at 8:53.

Josh and Madison preview the show.

Moose doesn’t like Crazzy Steve’s fun and games so tonight he’ll show him what being serious has gotten him.

Swinger volunteers to pay the referee off at Slammiversary but the referee comes in and says he’ll make sure Swinger is banned from ringside.

Scum jumps them from behind to start but Bahh runs them over, knocking Luster into a rollup from TJP. A double splash gets two on Luster but TJP misses the slingshot dropkick. That lets Luster get in a Pit Stop and TJP gets stomped down a bit. An old school Battering Ram connects but TJP manages an anklescissors to get in the hot tag to Bahh. Everything breaks down with TJP kneeing his way out of a suplex. Now the slingshot dropkick connects and Bahh adds a spinning belly to belly to Luster. A Samoan drop into a frog splash finishes Thornstowe at 4:50.

It’s time for Locker Room Talk, with Johnny Swinger still annoyed at the referee. The guest is John E. Bravo, who has a devil dog and doesn’t seem to get the idea that Rosemary is after him. Rosemary pops up as the second guest and Swinger explains the idea. He seems to think that the chemistry is between himself and Rosemary though, because he likes the heavy makeup (including Aja Kong in the 90s). An argument breaks out, with Swinger dropping a Frenchy Martin reference. Rosemary wants them to kill each other but here’s Taya Valkyrie to offer Rosemary a tag team. She’s down and Taya is pleased.

Here’s the North for a chat. Last week they jumped Ken Shamrock, who will never have a tag team partner or a friend because of his rage issues. If Ethan Page was his friend, he would get Shamrock professional help. Cue Shamrock….and here’s Sami Callihan to say who needs friends when you have an enemy. The fight is n with the North bailing but then Sami vanishes.

Post break, Scott D’Amore is on the phone with some “good brothers” when the North comes in to complain about what just happened. Therefore, it’s a title match against Sami and Shamrock at Slammiversary.

Your Flashback Moment of the Week: Eric Young wins the World Title.

Trey is ready to take out Madman Fulton.

Moose is defending and insists that we need to hear his ring introductions several times. Steve gets shoved down to start so he strikes away for some more success. It’s enough to pus Moose on the floor but his dive is pulled out of the air for a drop onto the apron. Moose swings him into the steps to draw some blood from the mouth. Forearms to the ribs set up a drop across the top rope to keep Steve in trouble.

A knee to the ribs cuts off a comeback attempt and we hit the abdominal stretch. Moose gets caught grabbing the rope so he puts Steve on top, only to get sunset bombed down. Steve slugs away and grabs a rollup for two. A dropkick to the knee puts Moose down again but he counters a high crossbody into a fall away slam. No Jackhammer Needed retains the title at 8:14.

Post match the beatdown is on until Tommy Dreamer and some medics come down. Moose kicks Dreamer in the head and hammers away before leaving. Post break, a bleeding Dreamer says he’s been in this business for thirty years and has fought thousands of wrestlers. Almost none of them have Moose’s talents but Dreamer knows Moose is in wrestling for a paycheck. Just like Moose didn’t listen to his coaches in the NFL, he isn’t listening to people around here.

Moose created his own title here and that’s not how it works. Dreamer has been beaten up by better over the years. His idol was Dusty Rhodes, who talked about Hard Times. We’re in the hardest times in the world but professional wrestling hasn’t stopped. Moose is the only person who has complained and he has been whining about catering. Dreamer quotes Hard Times and promises to make Moose a footnote in wrestling, just like he was a footnote in the NFL.

Hernandez arm wrestles the Deaners for money and has no trouble, despite some slightly cinematic camera angles.

Tasha Steelz and Nevaeh are here at ringside. Hogan hammers away to start but gets thrown down so Havok can scream. A delayed slam drops Hogan again but Havok has to get rid of Steelz. The distraction lets Hogan hammer away and we take a break. Back with Havok breaking a sleeper by driving Hogan into the corner.

A charge hits boot though and it’s time to choke with the long hair. Havok hits a backbreaker and a running knee to the face, followed by running boots in the corner. Steelz jumps up on the rope with Havok’s gas mask though and tosses it in to Hogan. A shot to the face sets up a kick to Havok’s head for the pin at 8:51.

Moose is ready to sue Dreamer over what he just said.

Ace Austin is here with Fulton. Trey slides in and avoids Fulton before heading straight outside to jump Austin. Back in and Trey’s enziguri just seems to annoy Fulton but he gets dropkicked into the corner. That just means a chokeslam to Trey and a one handed gorilla press puts him down again. A reverse suplex drops Trey on his ribs but he fires off some shots to the face.

That works for what must have been a good two seconds before Fulton tosses him back into the corner. Trey tries a moonsault and winds up on Fulton’s back with a sleeper. Fulton is right back with a side slam but Trey grabs it again from the mat. That’s broken up as well so Trey hits a middle rope neckbreaker. Some kicks to the head look to set up a springboard tornado DDT but Fulton easily counters with a northern lights suplex. Fulton chokes on the ropes but Trey finds a kendo stick and hits Fulton in the head for the DQ at 8:16.

Result: Madman Fulton b. Trey via DQ when Trey used a metal stick (8:16)

Post match Trey grabs a chair and beats Fulton down.

We get a quick Super Eric teaser to end the show. 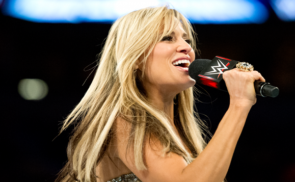