With the Cell less than two weeks away, it’s time to start filling out the rest of the card. One such match would be the Smackdown Tag Team Title match. While we won’t find that out this week, we’ll know one more option for the shot at the Usos as we have another triple threat match in the latest tournament. Let’s get to it.

Here are Daniel Bryan and Brie Bella for a chat with Renee Young to open things up. We see a clip from last week’s show where Andrade Cien Almas, Zelina Vega, Miz and Maryse beat the two of them down.  Bryan thanks Renee for making the fans upset but there’s another clip from earlier of Miz and Maryse calling out Bryan and Brie when the arena was still empty.

Back in the arena, Bryan and Brie call them out for a fight right now but Miz and Maryse have already left. Instead here are Vega and Almas to talk about how much fun last week was and how they’d love to do it again. Sure why not?

Bryan wastes no time in going for the YES Lock but Almas gets to the rope and shoulders Bryan down. The armbreaker over the ropes has Bryan in trouble and another shoulder sends him into the barricade. Back in and Almas misses a running knee, sending him outside in a heap as well. Bryan’s running knee off the apron gets dropkicked out of the air but he’s right back up with a suicide dive to send Almas into the barricade and us to a break.

Back with Almas getting crotched on the top but Almas knocks Bryan backwards, setting up the moonsault into the standing moonsault. Bryan kicks away and rocks Almas again but the big kick is reversed into a rollup to send Bryan head first into the corner. The double knees in the corner have Bryan in more trouble until Almas misses an elbow. The running knee finishes Almas at 11:38.

Post match Vega goes after Brie and gets kneed in the face for her efforts. Miz and Maryse pop up on screen to say they’re enjoying a nice meal at an Italian restaurant, but they were smart enough to shut the place down so they don’t have to dine with anyone from Detroit. They’ll see Bryan and Brie at the pay per view. Arrivederci.

Post break, Bryan and Brie, still in their gear, say they feel like Italian. Bryan: “I hope they don’t have a dress code.”

We recap Charlotte vs. Becky Lynch.

Charlotte and Becky are in separate locations for an interview. As the fans chant for Becky, Charlotte talks about winning the title in a fair match and wondering what Becky thinks she should have done. Becky asks if Charlotte is done taking the spotlight but Charlotte cuts her off, saying she knows what it’s like to be in someone’s shadow. All Becky had to do was ask for a title match. Becky: “Screw you.”

Becky is done playing and doesn’t care how it affects Charlotte because it was a full time job being her friend. Charlotte says when they fight, she’s not going to see her friend because Becky is always second best. Becky tells her to shine the title up real nice for her but Charlotte wants to know what the excuse is going to be next time.

The IIconics argue over who has more fun beating up Naomi, which turns into a “no, me” argument in their usual annoying way. Naomi goes straight at her in the corner to start but Royce’s slap takes it to the mat. The trash talk doesn’t work very well and Naomi baseball slides Billie Kay. A sunset flip finishes Royce at 1:23.

Post match Naomi gets double teamed but Asuka runs in for the save.

Video on Jeff Hardy defying death for years, but now he gets the chance to do it inside the Cell. The Cell won’t contain him because he will rise to the top and Randy Orton’s obsession will be his destruction.

Miz and Maryse are back at the arena because the food from a Detroit restaurant is disgusting. They’re back to call out Brie and Bryan one more time but Paige tells them about the two of them leaving. Paige says Miz isn’t done yet and gets to face anyone who wants to fight him. Miz isn’t happy but Paige says if he doesn’t fight, they’re done around here.

R-Truth is looking for Carmella but finds Maryse instead. Maryse doesn’t like being confused with Carmella, who she calls Staten Island trash. Miz doesn’t like this so Truth thinks Miz is married to Carmella. Miz asks when they teamed together last, because it was the last time Truth was relevant. Truth doesn’t know what Carmella sees in Miz. Confusion reigns.

Here’s Samoa Joe to say he didn’t see AJ Styles here tonight. Last week he promised to show up at AJ Styles’ house so he’s sure that AJ is locked up tight with his family, probably cradling a baseball bat. AJ’s wife Wendy is probably cradling their daughter Annie, telling them that Uncle Joe is a bad guy. See, Joe isn’t a monster though because he’s managed to make AJ be home on a Tuesday for once.

Annie can enjoy being tucked in tonight and she can get used to it, because after Joe gets done with AJ, he’ll be there every Tuesday night. AJ pops up on screen to say it’s time to stop talking. Cue AJ for the fight with Joe grabbing a chair. AJ takes it away but misses a big swing against the post. Referees break it up so AJ springboards onto Joe, taking out one of the referees in the process. Paige finally gets AJ to leave.

R-Truth and Tye Dillinger go Carmella hunting and Truth finally finds her. Truth to Carmella: “Hey! Have you seen Carmella?” He wants her to accompany him to the ring to face Miz because Miz will have the other Carmella in his corner. Tye: “That’s Maryse.” Truth: “No Maryse is my cousin from Detroit.” Truth mentions what Maryse said about Carmella and that’s enough to get Carmella in his corner. Tye: “For the love of Kid Rock, what are you doing?” Truth is trying to teach Tye something. Tye wants to know what that could be. Truth: “How to get into the main event of Smackdown Live!” Tye has nothing.

Video on what Orton will do in the Cell. It’s going to change people and destroy their sense of morality. He’s going to do things to Hardy that will keep you up at night but they’ll make Orton smile.

Usos vs. Sanity vs. Rusev Day

Young and Dain for Sanity. The winners face the Bar in a #1 contenders match. Joined in progress with the Usos taking English into the corner but Dain tags himself in and pulls Jey to the floor to take over. The beatdown begins with Dain tossing him hard into the corner and grabbing a neck crank. A running dropkick sends Jey to the floor and Young drops an elbow from the apron for good measure.

Back from a break with Jimmy coming in to clean house but Rusev tags himself in to superkick Young. A spinwheel kick drops Eric again but another blind tag lets Jey hit a Superfly Splash on Young with English making a save. Dain runs English over but gets superkicked to the floor. Jey dives onto Dain and breaks up Rusev’s dive. Young’s rollup gets two on Rusev but the Machka Kick finishes Young at 11:15.

Post match the Bar comes out to laugh at Rusev Day.

Quick look at the return of Mixed Match Challenge.

The Miz vs. R-Truth

Maryse has changed clothes since earlier and Carmella is with Truth. Before the match, Miz tells Kerwin to roll the footage from last week again. Miz is tired of having Bryan and Brie running around all night because they can drop the two of them faster than a defense drops Matt Stafford. They throw out one more challenge but Truth and Carmella cut them off instead.

Joined in progress again with Carmella on the apron as Truth does his dancing legdrop. A spinebuster and some right hands have Miz in more trouble but he knees Truth in the ribs to take over. We hit the chinlock with a knee in the back, followed by the YES Kicks. Miz misses the ax handle off the top and gets caught with a Stinger Splash but hits the short DDT.

Graves: “Truth has been asking what’s up for twenty years and has never gotten an answer.” The running knee is countered with a jumping kick to the face but Miz kicks him in the face. It’s time for the Skull Crushing Finale but here are Bryan and Brie for a distraction, allowing Truth to grab a rollup for the pin at 7:18.

Post match Miz gets the YES Lock on Miz as Brie goes after Maryse but Almas and Vega make the save. Miz and Maryse leave so Bryan and Brie grab stereo YES Locks on Almas and Vega. With the two of them tapping, Miz runs back to the ring but puts the brakes on as Bryan is waiting on him to end the show. 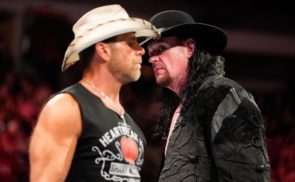 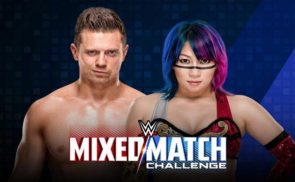