It’s the season premiere and that means….well I’m not sure actually as there isn’t really a season finale so this could be a little bit of everything. The two big matches are Roman Reigns defending the Universal Title against Braun Strowman and the New Day’s farewell six man tag. Let’s get to it.

The opening sequence has been updated to include the new roster.

The roster, including Daniel Bryan, is on the stage so HHH and Stephanie McMahon can welcome us to the show. They run down the card (and make a Rick James reference) and introduce some of the new/old names on the roster. That includes the Street Profits but Dolph Ziggler/Robert Roode jump the champs from behind and it’s a big brawl to start. Cue Lars Sullivan to clear the ring, leaving Apollo Crews and Chad Gable to be decimated. Jeff Hardy manages to knock Sullivan tot he floor and we take a break.

Sullivan runs Hardy over to start and tosses him down with ease. The top rope headbutt misses and Hardy slugs away to limited avail. The Whisper in the Wind gets two and Sullivan sends him outside again. A drop onto the apron gives Sullivan two but Hardy is right back with the Twist of Fate. Sullivan is up before Jeff can get to the top and he pulls Hardy down for the Freak Accident and the pin at 4:18.

Here’s New day for their farewell match. Big E. talks about how they have finally found the one thing stronger than the power of positivity: the WWE Draft. Kofi gets a little emotional when talking about all of their moments together. We hear about becoming the longest reigning Tag Team Champions, their wars with the Usos and all of the tears when Kofi won the WWE Championship. Woods tears up a bit when talking about being given a chance by two people he didn’t deserve. Big E. talks about having breakfasts in Waffle House and talking about their families and his….TV or something.

Kofi talks about being unsure about being unsure if he wanted to keep wrestling in 2012 when the two of them came up to him and told him about an idea. Yeah they had some special moments but Kofi thinks of them as brothers and starts crying again. Now they’re going to do this one more time because NEW DAY ROCKS.

Cesaro/Shinsuke Nakamura/Sheamus are ready to end these pancake eating Muppets.

This is New Day’s farewell and their first six man tag in over a year. Nakamura takes Woods down to start before it’s off to Kingston, who gets kicked in the face. A dropkick gets Kingston out of trouble and it’s off to Big E., who is put on Woods’ shoulders for a splash on Cesaro. Sheamus and Cesaro shoulder Woods down to take over again though and Sheamus drops a knee.

Woods is quickly over for the tag though and Kingston comes in with a top rope splash. The villains take him to the floor for the triple ram into the post and it’s Kingston in trouble for a change. Nakamura chokes in the corner and cesaro powers Kofi down with ease. Kingston gets knocked over the top and into the corner as we take another break. Back with Kofi hitting Trouble in Paradise on Cesaro and handing it back to Big E. to clean house.

The Rock Bottom out of the corner onto Woods’ knees gets two but the springboard tornado is broken up. Nakamura’s sliding German suplex gets two but Woods sends him to the floor. Kofi hits the big no hands dive and then kicks Sheamus in the head. Back in and Kofi dives into a kick from Nakamura, setting off the parade of strikes. Sheamus shouts that New Day is nothing without he and Cesaro before missing a charge into the post. That’s enough to set the Midnight Hour for the pin on Sheamus at 14:55.

Post match New Day huddles and Big E. talks about what their time together means to him.

Otis is asked about everything that has gone wrong for him as of late and here’s Sami Zayn to mention all of the bad stuff. Otis shoves him down and Sami is stunned.

Here’s Daniel Bryan to talk about how cool it is to be in the Thunder Dome for the first time. We see Brie Bella and Bryan’s daughter Birdie in the virtual audience for a nice moment. Bryan talks about what we have going on tonight and we hear about all of the new names coming to the show for the next year. Bryan is looking forward to facing a lot of these people in the ring but here’s Seth Rollins to interrupt.

Rollins says he is here to lead Smackdown and he wants to know which side Bryan is on. Bryan talks about wanting to save the planet but Rollins’ vision sounds self centered and a little dumb. Rollins: “You don’t mean that Bryan.” The fight is on and Rollins stomps away but Bryan hits a running clothesline.

The jacket comes off and the threat of a YES Kick sends Rollins bailing. Cue Rey Mysterio and Dominik Mysterio to chase Rollins back to the ring and Bryan walks away, leaving Rollins all alone. Now it’s Murphy running in and Rollins is knocked to the floor in a hurry. With Rollins gone, Murphy sticks out his hand but Rey and Dominik leave.

Ziggler and Roode are challenging. Dawkins dropkicks Ziggler down to start but misses the spinning splash in the corner. Roode comes in and stomps Dawkins down in the corner, followed by a toss into the Fameasser for two. Everything breaks down and it’s a double DQ at 1:32.

Result: Street Profits vs. Dolph Ziggler/Robert Roode went to a double DQ when all four brawled (1:32)

Post match Roode and Ziggler hit a spinebuster/Zig Zag combination on Dawkins but Ford hits a high crossbody onto both of them.

We look back at Bayley vs. Sasha Banks from last week, which set up their match in the Cell.

Here are Bayley and Banks for the contract signing, with Adam Pearce overseeing things. Banks signs in a hurry but Bayley says she is wanting to get this out of the way so she can continue her record setting reign. Bayley says Banks has been waiting to turn on her but Banks says if she could have she would have. Banks promises to take the title so Bayley grabs the chair, which Banks grabs as well. Bayley bails without signing, so Banks promises to make her sign no matter what.

Reigns, with Paul Heyman, is defending and Strowman is in street clothes. A Superman Punch puts Strowman on the floor to start and Reigns adds the apron dropkick. Reigns knocks him around again, including sending Strowman face first into the announcers’ table. Strowman gets in a shot of his own and sends him over the announcers’ table, followed by the running shoulder over the barricade.

Back from a break with Strowman hitting…something in the corner as the camera stays on Goldberg in the crowd. Reigns tries the Superman Punch but gets caught in a choke. That’s switched into a powerbomb, followed by the chokeslam for two on Reigns. The kickout includes a low blow and the spear gets two. Another spear is countered into a powerslam attempt but Reigns slips out. Strowman tries a pop up powerbomb but Reigns counters into a guillotine choke of all things and Strowman taps at 10:40.

Post match here’s Jey Uso to stare Reigns down as Reigns hits a spear on Strowman. Reigns grabs a chair and says if he can do this to Strowman, what could he do to Jey? Reigns unloads on Strowman with chair shots, so here are the referees and agents to….not quite break it up. More chair shots keeps Strowman down so Uso gets in, with Reigns dropping the chair. Reigns says this makes no sense and tells Uso to beat on Strowman instead.

Uso grabs the chair and Reigns turns his back so Uso can hit him. Jimmy doesn’t do it, instead punching Reigns in the face and superkicking him down. Jey shouts that he loves Reigns too and chairs him down, drawing the referees back in. With Uso being held back, Reigns hits the Superman Punch and says it took him turning his back for Jey to have his best shot. Reigns leaves as Jey is down to end the show. 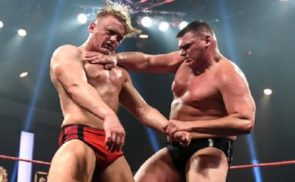 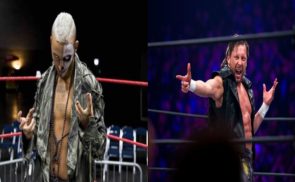