It’s the third week of the Heritage Cup but this time around we have something even bigger going on. This time around it’s a huge main event featuring Ilja Dragunov/Pete Dunne vs. Walter/Alexander Wolfe. That’s a preview for Walter’s upcoming United Kingdom Title defense against Dragunov, which has all of the potential. Let’s get to it.

Conners won’t shake hands, just like he wouldn’t when the brackets were revealed. Mastiff works on the arm to start so Conners does the same to keep things even. That’s enough to send Conners flying into the corner as he can’t do much against the power to start. Mastiff manages a dropkick and uppercuts Conners into the corner as the first round ends.

Round two starts with Mastiff shouldering him into the corner as the one sidedness continues. Conners gets in a shot to the ribs so Mastiff runs him over with another shoulder. Mastiff grabs an armbar on the mat but Conners fights up. A powerslam out of the air plants Conners for two so Mastiff slaps him out to the floor without much effort to end the round. We start round three with Conners swinging away so Mastiff blasts him in the face for the knockout and the automatic win at 25 seconds of the third round (7:08 total).

Jordan Devlin talks about wrestling for so much of his life and finally winning the Cruiserweight Title. Then he sees someone holding the title and calling themselves the champion, but if Santos Escobar wants to do that, he needs to come pin him.

Ashton Smith and Oliver Carter have a chat about shirts before Carter talks about being ready to beat Eddie Dennis next week.

Piper goes with a standing armbar to start but Dawn reverses into a wristlock. A top wristlock actually works on Niven and lets Dawn grab a headlock. That’s reversed into an armbar as they’re doing quite a bit of grappling to start. Back up and Niven misses a clothesline and gets rolled up for two, but she’s fine enough to knock Dawn into the ropes.

Dawn pounds away on the back but gets kicked down without much effort. A running seated crossbody gives Niven two, which seems to be more her speed. Dawn is back up with a kick to the head and a top rope Meteora gives her two of her own. Niven powers out of a dragon sleeper and sends her into the corner for the running knees. The Piper Driver finishes Dawn at 8:18.

Kenny Williams is ready for Trent Seven next week.

We look at Flash Morgan Webster being attacked last week.

Video on Trent Seven, who wants the Heritage Cup to prove he still has it.

It’s Walter/Alexander Wolfe for Imperium. Dunne hammerlocks Wolfe to the mat to start and then hits a running chop to put him down again. Walter comes in and it’s time for the big rival renewal. Dunne takes him into the corner but gets powered down so Walter can work on the arm. A nip up into a headscissors lets Dunne go for a cross armbreaker into a short armscissors. That’s powered up for the escape but Dunne slips down the back into a sunset flip for two. Dragunov comes in and is immediately headlocked takeovered down to slow the pace.

It works so well that Walter does it again, followed by a rather loud chop. A running seated senton crushes Dragunov and it’s Wolfe coming in for the fast two. Wolfe’s cobra clutch backbreaker gets two more and we hit the chinlock. That doesn’t last long as Wolfe holds him up for the big chop but Dragunov chops Wolfe right back. A kick to the head allows the double tag to Dunne and Walter, with the former snapping off a German suplex. The armbreaker goes on again but Walter powers out in a hurry and kicks Dunne in the head.

The running dropkick sends Dunne FLYING into the corner but it’s right back to Dragunov anyway. A knee to the face rocks Wolfe and Dragunov plants him down for two. The 61Line gives Dragunov two more and Dunne tags himself in, setting up double kicks to the head in the corner. Dragunov’s top rope backsplash gives Dunne two but Walter tags himself back in. The chop into the German suplex sets up the top rope splash but this time Dunne pulls Walter into the triangle choke.

Wolfe chokes Dragunov on the mat so Walter powerbombs Dunne onto the two of them for the break. Everyone is down until Dunne takes Wolfe to the floor, leaving Dragunov to get chopped out of the air. The powerbomb gets two on Dragunov with Dunne making the save before heading outside again. Walter’s German suplex gets two more so it’s time to smack Dragunov in the head over and over.

Dragunov gets two off a big clothesline as Dunne comes back in with the Bitter End to Wolfe. The sleeper is blocked and Dragunov strikes away again, setting up the Gotch life suplex for two. Torpedo Moscow is blocked by Wolfe so Dunne sends him hard into the barricade. Dragunov tries it again but has to slip out of the sleeper, setting up Torpedo Moscow to finish Walter at 19:02. 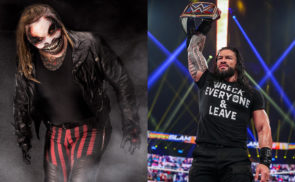 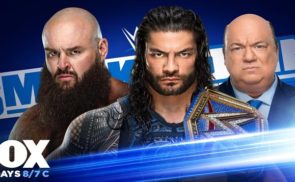