You mean it’s fake? Back in August, WWE moved from the Performance Center to the Amway Center, now dubbed the Thunder Dome. This was a big upgrade for the company after spending the entire summer in the much smaller venue. The move allowed for a bigger and more modern display, including hundreds of screens showing fans watching the event from home. That is in theory at least, as it might not be so simple.

In addition to WWE moving to the Thunder Dome, NXT has moved into the Capitol Wrestling Center, which is a smaller version of the Thunder Dome. The Capitol Wrestling Center’s virtual audience is its most obvious feature and at least allows for something for the wrestlers to play off. It isn’t the same as having fans there in person of course but it is a lot better than nothing. The wrestlers can see the fans’ reactions in real time, which can offer some instant feedback. However, not everything is apparently so live.

A fan has tweeted out a video, saying that a clip of her watching NXT as part of the virtual audience is stock footage. She appeared as part of the virtual audience for another show but was watching AEW Dynamite at the time. The clip appeared in a scene involving Breezango, which the fan claims was filmed earlier. There is no word on if this breaks any part of WWE’s agreement with fans.

You might have seen this before. Check out the clip from NXT and the response:

Opinion: I’m not sure what to think of this but it isn’t something that is going to make much of a difference to most fans. At the same time though, it does seem a little pathetic that WWE cannot even find that many fans to watch their show instead of having to use old footage. I can’t imagine there is anything illegal about it, but it doesn’t exactly make WWE look good.

What do you think of the Thunder Dome? When will WWE have live fans again? Let us know in the comments below. 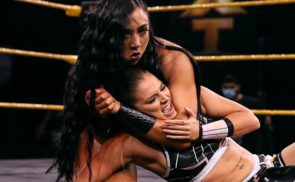