This is starting to feel a bit more normal but there is almost no way of telling what to expect on this show. There is a good chance that we are going to be seeing another long form match to fill in some time and really, that might not be the worst idea. The way WWE presents these shows with no fans isn’t exactly exciting so keeping those parts to a minimum isn’t a bad move. Let’s get to it.

Michael Cole is in the ring to introduce Rob Gronkowski, the host of this year’s Wrestlemania. After a video on Gronkowski, Mojo Rawley comes in to say that’s not hyped enough and handles the real introduction. Gronkowski comes out and dances to the ring, saying he’s ready for the party even in front of no fans. Rawley promises to have his back and front but here’s King Corbin to interrupt. Corbin talks about how we don’t have pads around here but he knows what it’s like to be in the NFL.

Cue Elias to say he wants to sing a song about Corbin, who finally agrees to listen to it. Elias sings while Rawley and Gronkowski dance behind Corbin. With the song over, Corbin gets in Gronkowski’s face but Rawley gets behind him and shoves Corbin over, allowing Elias to throw him over the top. Gronkowski says he can’t make matches, but he thinks Elias should face Corbin at Wrestlemania.

That would be the group name for Sami Zayn/Cesaro/Shinsuke Nakamura, though Zayn is the odd man out here. Bryan and Gulak do the YES chants again, though a bit more ironically this time. Nakamura and Bryan start things off as Sami sits in on commentary. Bryan cranks on the arm and it’s quickly off to Gulak, who gets taken into the corner. That’s broken up and the tag brings Bryan back in.

Nakamura gets sent to the floor for the suicide dive but Cesaro catches Bryan with a tilt-a-whirl backbreaker as we take a break. Back with Bryan in trouble in the corner, including Nakamura hitting his sliding German suplex. Bryan gets away and makes the tag off to Gulak, who is caught with a quick powerslam from Cesaro. A clothesline drops Nakamura but there is no Bryan to tag. Bryan pops up though and the tag brings him back in with a top rope sunset flip. Gulak cuts Nakamura off as Bryan pins Nakamura at 10:02.

Post break, Bryan and Gulak are stretching after their match when the Collective comes in to say Gulak is holding Bryan back. When is Bryan going to start listening to Sami instead of this loser? Bryan challenges Sami to an Intercontinental Title match at Wrestlemania but Sami says put your faith in Gulak. If Gulak can beat Nakamura, next week, Bryan can have his title shot at Wrestlemania. Bryan instantly accepts, though Gulak looks a little unsure.

Paige joins us via Skype but Bayley and Sasha Banks cut her off in a hurry. Bayley mocks the accent but Paige talks about how hard it is to truly represent the women’s division. It takes courage to do that and the two of them just don’t have it. Bayley calls Paige out for not being able to wrestle so Paige says she’s Bad Bayley now. It breaks Paige’s heart that she can’t do this anymore but it’s Wrestlemania season.

She spoke to FOX and gets to announce Bayley’s Wrestlemania match right now, so Bayley is going to be defending against Lacey Evans and Dana Brooke. Bayley: “You want to throw Tamina in there?” Paige does indeed throw Tamina in there and adds Naomi for a bonus. Sasha: “You b****!” Paige still isn’t done though and adds Sasha Banks as the fifth challenger. Bayley and Sasha aren’t sure about this one.

Marc Crozer plays Bray to the ring in an eerie live performance with barrels of fire, a scrap metal altar and a voodoo dancer. Harper and Rowan are out with Bray as well. No big entrance for Cena this year but he wasn’t topping Wyatts’ anyway. Bray drops to his knees and offers Cena a free shot to become the monster. Bray: “FINISH ME! FINISH ME!” Cena stands in the corner and says bring it on as Lawler asks JBL what just happened. Bray shrugs off a headlock and stomps Cena down. Bray: “THIS IS THE ONE YOU CALL HERO???”

Cena explodes out of the corner with clothesline he often explodes out of the corner with and Wyatt’s head is somewhere over Texas. Harper and Rowan get on the apron but Bray orders them down. Cena is starting to get frustrated as Bray eggs the crowd on, causing Cena to choke him in the corner. A running boot to the face drops Bray again and Cena is still conflicted. What he’s conflicted over isn’t clear but I guess it’s over Bray’s mind games.

Bray’s suplex slam (always looks cool) drops Cena and Bray puts on a sleeper to go a bit more conventional. Cena fights back with his usual and gets the expected reaction, only to have Bray bridge up like a spider to break up the Shuffle (Fans: “THAT WAS CREEPY!”). A Rowan distraction lets Bray get in a release Rock Bottom for two. Cena gets the same off a tornado DDT and is looking more and more tentative.

The top rope Fameasser is countered with a powerbomb and Bray has a terrifying look on his face during the near fall. Cena’s AA attempt doesn’t work and Bray grabs a gutbuster. A DDT onto the apron makes the fans sing Bray’s song of “He’s Got the Whole World in His Hands”. Cena breaks up a superplex attempt but dives onto Harper and Rowan instead of Bray. Well that’s not very nice of him.

Bray uses the distraction to send him into the steps, which makes Bray declare that he’s figure it out now. With nothing else to do, Bray grabs the steps but Cena takes them away. He can’t turn to the dark side though as the announcers think Cena is trying to not gets sucked into Bray’s confusion. It’s so comforting knowing that they’ve figured that out. Back in and Bray misses his backsplash, setting up the AA for two. Why is anyone surprised by that kickout?

Rowan offers a distraction so Harper can deck Cena, earning him a spear through the timekeeper’s area. Back in and Sister Abigail gets two, meaning it’s time for Bray to be all freaked out. Bray goes outside and gets a chair, again offering Cena a free shot. John thinks about it this time but hits Rowan instead (how is that really any different?). Another Sister Abigail is broken up and another AA puts Wyatt away at 22:31.

We look back at Bray vs. Cena promo from last week.

Bliss and Cross don’t like what Asuka did because Bliss has done the same thing but better. Bliss has nothing to do next week so Asuka can come face her. Asuka can even come through the front door.

Here are Miz and John Morrison for the Dirt Sheet. They feel like they’re missing something, though it might be the lack of fans doing their chant. Therefore, they do the chant themselves for a bit before saying they need Wrestlemania challengers. They’ve beaten everyone though and that means it’s time to poll the audience. Cue….Miz and Morrison as New Day in the seats, complete with Morrison in a unicorn costume. Then it’s Miz and Morrison as the Usos interrupting to say they deserve the shot.

Non-title and joined in progress with Otis shoving Morrison down but getting kicked in the head for his efforts. Morrison tries a springboard but has to roll through, allowing Otis to shrug off a crossbody. Otis loads up a superplex and hands it off to Tucker (Knight according to Cole), making them the third team I’ve seen do that spot this week. Miz comes in and it’s the Bushwhacker strut into the double stomach shot to Miz’s head.

Tucker hits a running flip dive off the apron to both champs and we slow way down in a hurry. A cheap shot takes Tucker down though, allowing Miz to stop dancing and dropkick him through the ropes. The chinlock goes on but Tucker fights up, only to have Dolph Ziggler come out for a distraction. Back from a break with Ziggler on commentary and Tucker slamming both of them down at once. The circle of lights glitch means we can’t see Otis getting the hot tag as everything breaks down.

The Caterpillar is loaded up but Ziggler grabs the mic to show Otis some photos of himself with Mandy Rose over the week. Miz and Morrison have to save Ziggler so Otis beats both of them up, including sending the two of them into the post. A double shoulder sends Miz and Morrison through the barricade and Otis grabs a chair. Tucker has to calm him down because the match is still going on, only to have Otis chair Miz for the DQ at 14:35.

Result: Miz/John Morrison b. Heavy Machinery via DQ when Otis used a chair (14:35)

Next week: Bliss vs. Asuka, Nakamura vs. Gulak, a new Firefly Fun House and New Day vs. Usos in a #1 contenders match.

Here are Roman Reigns and Goldberg to sign the Wrestlemania contract. Cole recaps the events setting up the match and asks Reigns why he challenged Goldberg. Reigns says the greats have challenged him and they’ve all lost, so Goldberg will be the same. Cole brings up a tweet from January when Reigns said it was stupid to headbutt a locker before a match. Reigns says that’s stupid and he took a shot because it made sense. He’s taking the title at Wrestlemania and signs. Goldberg says he’s been headbutting doors around the world for years and he’ll beat Reigns at Wrestlemania. The contract is signed and the table is turned over, meaning the staredown can end the show. 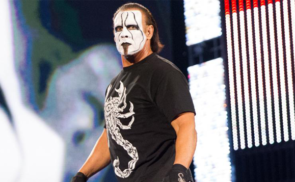 WATCH: All of Sting’s Appearances in WWE