KB’s Review: You Can Count On It

I have no idea what I’m going to talk about here. Normally I have a few ideas I kick around before settling on the right thing to talk about on any given week but really, I don’t have a clue what I want to focus on this time. The events of the last week or so have completely changed everything around and I’m not sure what to think of anything anymore. I know things are going to get better, but it’s really hard to see how when you’re sitting right in the middle of everything.

The world has gone completely upside down recently and the wrestling world has gone with it. I’m not sure when things are going to get better but they’re certainly not going to get normal anytime soon. Right now, the two major wrestling shows are still running but that could change at almost any given moment (which has been the case almost day to day). There are still some indy companies with some shows in the can already so we’ll have something like that going forward, but it’s not like anything feels all that secure at the moment.

At the end of the day (or probably a lot of days), we’re going to get out of this though and things will be ok in the end. There are going to be a lot of things going on between now and getting out the other end and a lot of that is going to be tough, but we’ve gotten through worse times than this before and we certainly will again. Just keep safe, be smart, and keep an eye on yourselves and your health, because there is a lot to look forward to both during and after this whole mess is over. It might be a long time, but it’s something that can be done by just paying attention and making sure that you follow the rules and suggestions.

One of the big things that will be waiting for us is wrestling, and that’s always a nice thing to think about. Over the last week, WWE has run its events at the Performance Center, with most of them featuring no live fans in attendance. Couple that with all of the issues involving WrestleMania at the moment (it’s currently scheduled to take place, but at this point there have been so many changes that it might as well be taking place on the moon) and you might start to realize how much you miss the calm and normal situations that usually come with wrestling.

If there is one thing that I have learned from this ordeal, at least from a wrestling fan’s perspective, it is that wrestling really has been a constant in my life. I’m quite the sports junkie and it was devastating when the NBA, NHL and NCAA all canceled/postponed their seasons at almost the same time. It was every bit of a one-two-three-probably more than that punch in a row and I was almost depressed for a few days as a result. I’m sure I wasn’t alone in those feelings, but there was something on the back burner that could bail me out.

That was, of course, wrestling, which was still going to be ongoing almost every night of the week. Yes some of it was going to be taped and some of it wasn’t going to be all that thrilling in some ways and yes WWE was going to be rather different with their shows coming from the Performance Center, but what mattered was that I had something to look forward to most nights of the week. With everything else going on and going away in the world, that was quite the relief and something I didn’t realize how much I needed at the moment.

If nothing else, it has shown me how impressive it is for Monday Night Raw to have stuck around on television for so long. I know their line about being on the air for however many consecutive weeks (or whatever other details they throw in to keep the thing as accurate as they can make it at the time) it has been on can get annoying, but if there is one thing it does offer, it is a little bit of security.

While it may not be in the same format that it usually follows, Monday Night Raw was on the air earlier this week and it was a nice way to spend three hours. Yes an hour and a half was spent on this year’s Royal Rumble but it was an exciting match and watching it again was a nice diversion from everything else. That has been the case before, and it ties back into the Royal Rumble again.

Just shy of fourteen months ago, my grandmother passed away after a very short illness (she was at home and coherent ten days before she passed away). The day after she was gone was the Royal Rumble, which I had been looking forward to for a long time (as I always do). Just like this year though, everything had been turned upside down and I wasn’t sure what exactly I should be doing.

This is what helped me through:

On Sunday, a buddy of mine sent me a text asking how I was feeling and suggested that I watch the Royal Rumble that night, if nothing else to clear my head a bit before the funeral later in the week. It turned out to be some of the best advice that I could have had, as it did make me forget about things (to an extent that is) for a few hours before we got to the more important stuff later on. It served as an escape for me and that was exactly what it has done before.

Over the years, WWE, and wrestling in general for that matter, has been there for me. When I was a kid and my parents split up, my mom got me a new video game to make the move a little bit better. That game: Saturday Night Slam Masters, a wrestling game, for the Super Nintendo. It might not have the best memories for me today, but that game got me through a good bit when I needed something to help get me through. That has been the case before and that has been the case again.

I’ve been a wrestling fan all of my life and I can’t imagine that ever changing. I’ve loved it since I first saw some guy in a bright yellow shirt with red writing on it and have been hooked ever since. Wrestling is one of the true constants in my life and while it has changed so much since I started watching, it’s one of those things that I know I can count on in one form or another. Find something like that of your own, because it can be a huge help in times like these.

Since it’s about me, check out my favorite match:

It might be something as low level as a tiny indy company or all the way up to WrestleMania, there is always going to be some sort of wrestling to watch. That is the kind of thing that has helped me get through a lot of things in my life and it is helping me get through this as well. That’s something that can make things a lot easier, no matter how the wrestling has been.

Everyone needs something to get them through this time as it’s one of the few things that has truly shaken up the entire world in a very long time. I’m not sure what is going to happen to the wrestling industry during this whole situation, but there is a chance that it won’t be the same after everything is back to normal. What matters most though is that it is still around for the time being and that is a good thing. Hopefully it can help you through things as well, because it can offer a lot if you give it a chance. Wrestling is going to be around in some form, and that’s something you can count on. 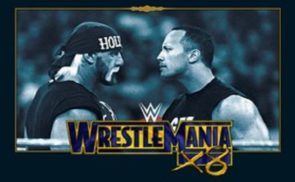 REVIEW: WrestleMania 18: The One And Only Match That Matters 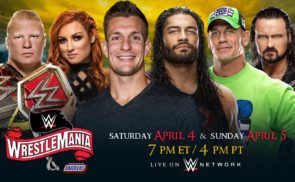