Since WWE is forced to remove WrestleMania 36 from the Raymond James Stadium in Tampa, Florida due to the COVID-19 (Coronavirus) pandemic, the event will now be held in an empty arena, with only “essential personnel” in attendance.

After a tug-o’-war with city officials, Vince McMahon had no other choice but to “pull the plug” on hosting the event in Tampa, since commissioner Les Miller stated that it was going to happen anyway if WWE did not make the decision. As a result, WWE.com released the announcement that it will be at the Performance Center instead.

I posted an exclusive story that WrestleMania was going to change their format and not have the show run the full time as planned. This was confirmed with WWE’s latest announcement that it will now be a two-day event, taking place on both April 4 and 5.

READ MORE: EXCLUSIVE: WrestleMania 36 Could Be Having Some Major Format Changes

How Much Money Did WWE Lose for Canceling WrestleMania 36 in Tampa Bay?

As a result of WrestleMania no longer occurring at the Raymond James Stadium, and no fans will be in attendance, WWE is now losing a significant amount of money due to ticket and merchandise sales. In fact, according to Brandon Thurston of WrestleNomics, WrestleMania 36 would have drawn a gate of around $15 million. In addition, the four adjacent shows at the Amalie Arena (WWE Hall of Fame, NXT TakeOver: Tampa Bay, Raw, SmackDown) would have generated another $4 million. In addition to the $3 million expected for live merchandise sales, TheWrap reported that the loss totals an estimated $22 million.

Here is the WWE statement released by the Raymond James Stadium website, which confirms that refunds will be given to ticket purchasers.

“In coordination with local partners and government officials, WrestleMania and all related events in Tampa Bay will not take place. However, WrestleMania will still stream live on Sunday, April 5 at 7 pm ET on WWE Network and be available on pay-per-view. Only essential personnel will be on the closed set at WWE’s training facility in Orlando, Florida to produce WrestleMania.  Refunds for all WrestleMania Week events are available at all original points of purchase.

This is indeed a very tough loss for WWE. Although there have been rumors of a possible switch to Madison Square Garden on June 7, which could have help recuperate the loss wages, WWE’s recent announcement looks to indicate that they are unfortunately going to take the loss, and WrestleMania will be held in empty arenas after all. However, since this situation remains fluid, more announcements could be made before the event occurs.

KB’s Review: You Can Count On It 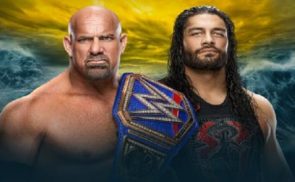