TLC is now later this month and that means it is time to start putting the card together. The big story coming out of last week would seem to be Kevin Owens as the next challenger for Roman Reigns and the Universal Title, but the question is what kind of a match will they be having. Let’s get to it.

We open with the roster on the stage and Michael Cole talking about how important Pat Patterson was to WWE and wrestling as a whole. We get the ten bell salute and everyone is rather silent in a nice moment.

Kayla Braxton is in the ring and gives Roman Reigns a huge introduction, including listing off all of his accomplishments. This brings Reigns, Jey Uso and Paul Heyman to the ring, with Heyman showing Braxton how to properly do the introduction. Braxton brings up Jey Uso going nuts last week and we see a clip of Reigns talking about how Jey lost at Survivor Series because his team didn’t respect him and therefore didn’t respect his family.

Therefore, Jey attacked Otis and Kevin Owens, with the latter fighting back and saying that he is ready to face Reigns. Back in the arena, Braxton asks if Reigns is scared of Owens because he didn’t face Owens last week. Reigns says she has failed at her first question on the biggest night of her career. Michael Cole could have done this job. The next question is about Reigns possibly using Jey Uso, so Reigns has Heyman talk about how successful Uso has been over the last few weeks, even drawing higher ratings than usual.

Cue Kevin Owens to say he wants to face Reigns but Jey gets in his face. Owens says he wants to face the head of the table instead of a bus boy. Since Reigns is the head of the table, let’s get a table, a ladder and some chairs in the ring and put that title on the line. Reigns says he accepts, but we’re not doing it right now because there is a lady in the ring and he isn’t a savage. Reigns tells Owens to grow up and leaves with everyone else. Owens says he’ll grow up with Reigns grows some testicles. Reigns pauses for a few seconds and then keeps walking without looking back.

Post break Jey apologizes for overstepping his bounds but Reigns says he’s got this. Owens will face the consequences.

Bianca Belair is on commentary. Bayley takes Natalya into the ropes to start and goes outside to yell at Belair. The running dropkick underneath the ropes takes Natalya down but Bayley goes to yell at Belair again, earning herself a whip into the steps as we take a break. Back with Bayley ducking the discus lariat but getting rolled up for two. Bayley sends her into the corner but misses a charge into the corner, with her knee getting banged up in the process. The Sharpshooter goes on and Bayley….taps at 6:04.

We see some tweets to Pat Patterson, including a rather touching one from Vince McMahon.

Cole and Graves introduce the Pat Patterson tribute video, with the original Intercontinental Title at ringside.

We get the Pat Patterson tribute video, set to Patterson singing My Way, his signature song.

The current and five former Intercontinental Champions as this is the Pat Patterson Tribute Match. Nakamura can’t do much with Big E. to start so it’s off to Ziggler, who is powered into the corner without much effort. Bryan comes in to work on the arm and takes Zayn out with a suicide dive for a bonus. Back in and Bryan goes up top, only to get dropkicked down by Ziggler as we take a break.

We come back with Bryan finally getting away from Ziggler in the corner and diving over for the hot tag to Big E. House is cleaned in a hurry, including suplexes to Nakamura and Ziggler. Big E. sends Zayn into the corner but misses a charge into the post. Mysterio tags himself in and hits a top rope sunset flip for two but the wheelbarrow bulldog is countered into the Blue Thunder Bomb for two more. Ziggler comes back in so it’s back to Bryan for the running dropkick in the corner.

The YES Kicks rock Ziggler but he’s right back with a superkick for two of his own. Rey dives in to take out Nakamura, only to get pulled down to the floor. Zayn tags himself in behind Ziggler’s back so Bryan’s running knee to Ziggler gets no count. The surprise rollup gets two on Bryan, who is right back with the YES Lock on Zayn, who gets his foot on the rope for the break. They trade rollups for two each until Bryan grabs the small package for the pin at 11:25.

Post match the villains offer another fight but Ziggler gets left alone. Ziggler offers a bunch of alliances but gets a Patterson atomic drop from Bryan. After a long time falling, Ziggler slips into the 619 position and the Big Ending leaves him laying.

Kevin Owens talks about how he used to look up to Roman Reigns, who never looked down on people. He was one of the boys but now everything has changed. Maybe Paul Heyman got in his head or maybe Reigns talked himself into being this way. Owens has done some horrible things but he has tried to change. Kalisto of all people interrupts and, after getting a compliment on his fedora, Owens calls Reigns an arrogant….he can’t say the word because he’ll upset FOX. It’s two syllables that starts with an A and Owens hums it instead. Otis comes in and says they’re ready to run over Uso and Reigns tonight. Sounds good to Owens.

We get a sitdown split screen interview between Carmella and Sasha Banks. Carmella mocks Banks’ catchphrases and nicknames but Banks says she’s ready to fight right now. Cole brings up Carmella saying she used to be like Banks, which makes Banks like. Carmella wishes she could be like Banks, sending Carmella into a laugh about not needing to be a Nicki Minaj wannabe.

Banks talks about Carmella needing help to get everywhere she can, including latching on to the guy with no chin and then R-Truth. Carmella says she’s the one who walked into the Performance Center and then became a star. Now the hot chick is going to take Banks’ title. Banks makes the challenge for TLC and we seem to be set.

The Mysterio Family is here with Murphy so Corbin brings out too unnamed lackeys in hoods. Corbin tosses Murphy out of the corner to start and then pulls him over the top for a toss into the middle. Murphy comes back with some shots to the face and sends Corbin outside for a dropkick through the ropes. A kick to the face from the apron drops Corbin again but the lackeys’ distraction lets Corbin throw him hard over the barricade.

We take a break and come back with Corbin hitting Deep Six as Graves identifies the men as Wesley Blake and Steve Cutler, formerly of the Forgotten Sons (not mentioned here). Corbin punches Murphy down in a hurry but Murphy is back with a quick chinlock of all things. Back up and Murphy hits a quick dropkick, followed by the jumping knee to the floor. Cutler and Blake get in a fight with the Mysterios and Corbin uses the melee to catch Murphy in the End of Days for the pin at 10:04.

The Street Profits hype up the main event but Robert Roode comes up to talk about last week’s loss. Cesaro is here as well though and says he and Shinsuke Nakamura are the real team around here. A lot of yelling ensues.

There is no Reigns to start so Jey has to go it alone. Otis wastes no time in blasting Uso with a clothesline, only to miss a charge into the post. Owens comes in and gets caught in a Samoan drop so here are Reigns and Heyman to even things up. An enziguri puts them both down again and it’s Reigns coming in with a Superman Punch to drop Otis. Reigns isn’t done and he sends Otis into the announcers’ table, the post and the steps.

Just to make it worse, Reigns picks up the steps and CRUSHES Otis over and over. Owens tries to make the save but Jey takes him down as well as we take a break. Back with Owens in a handicap match this time and getting kicked down by Uso. Owens manages to send him into the corner for the Cannonball though and the backsplash crushes Jey again.

Back up and Owens hits his own Samoan drop, allowing him to glare at Reigns. Owens demands that Reigns get in the ring but the referee stops him, allowing Jey to hit a superkick. Jey goes up top but Reigns tells him to tag out because he is finishing this. Owens knocks Reigns off the apron though and drops Jey, only to have Reigns break it up for a lame DQ at 11:26.

Post match Reigns and Uso grab chairs to destroy Owens. The Superfly Splash onto a chair onto Owens makes it worse….and Reigns hits Jey with the chair. Reigns shouts about having to do it himself and unloads on Jey. Reigns yells that Owens has his attention and hits him in the face. Owens should have just taken the title but he had to attack Reigns’ family so now Reigns is taking his manhood and livelihood. Reigns poses with the title to end the show. 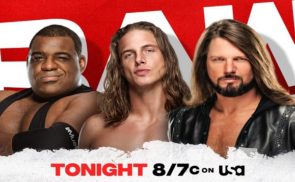