I’m almost not sure what to think about this as the show was actually kind of important last week. That came so far out of nowhere that I can barely comprehend the fact that it took place. I could certainly go for something more like that, but I have no reason to believe that it is going to be the norm. Let’s get to it.

Garza comes to the ring in a suit and wrestles in the pants. Commentary does recap some of the history between these two as Carrillo hits the springboard elbow early on. Garza kicks him down though, TAKES OFF HIS PANTS, and stomps Carrillo out to the floor. Another kick to the face sets up a seated abdominal stretch, followed by a modified Gory Stretch. That’s broken up in a hurry and Carrillo snaps off a monkey flip out of the corner. A standing moonsault gets two and Carrillo muscles him up into a suplex for two. Garza is right back with a low superkick though and it’s the Wing Clipper for the pin at 5:09.

Here’s Alexa Bliss for A Moment Of Bliss with Randy Orton. After a clip of last week when the Fiend interfered and cost Orton his match against AJ Styles, Orton talks about how well he knows Bray Wyatt. He hasn’t met the Fiend yet though, but he understands that Fiend wears his pain and suffering on his exterior. Orton on the other hand keeps all of his pain and suffering inside. They both hear voices too, but the Fiend’s voices are Orton’s. Bliss: “Well that’s not what he told me.”

Orton thinks he has gotten inside of Fiend’s head, which Bliss thinks is what the voices have told him. Or are they telling Orton lies? Who is manipulating who? The lights go half off and Orton asks if Bliss sees what he means. More of them go off and Bliss asks Orton the same thing. The lights come back up and Bliss has jumped into Orton’s arms as Fiend pops up. Orton hands Bliss to him (as Fiend seemed to be begging for her) and bails, before asking who is laughing now.

He has a weak spot:

The winner gets McIntyre at TLC for the title shot. AJ and Riddle are sent outside so Lee teases the big dive, sending the other two scattering in advance. Since Lee isn’t Nia Jax, he stops when he sees his target gone and the leapfrogs both of them back inside. A running crossbody gets two on Riddle and AJ is sent into Riddle in the corner. With AJ down on the floor, Lee stands on Riddle’s hand but AJ is back up to knock Lee outside. Riddle dropkicks AJ down to join him and then hits a springboard dive onto the two of them.

Back from a break with Riddle hitting a series of Brotons on Lee for one but the Floating bro misses AJ. It’s Lee’s turn to clean house again, this time throwing Riddle around with ease. Riddle slips out of the Spirit Bomb though and grabs a triangle, only to be swung into AJ while pulling on Lee’s arm.

Lee breaks it up and Riddle kicks him in the head, setting up the running forearms in the corner. A Pounce sends Riddle flying so it’s AJ finally getting to hammer on Lee. AJ gets caught on top so Riddle pulls Lee off, only have AJ hit a high crossbody for two on Riddle. Some jumping knees put Lee on the floor but it’s AJ hitting the Phenomenal Forearm to pin Riddle for the title shot at 13:59.

Here’s Nikki Cross for a chat. Nikki talks about how Alexa Bliss has become someone she doesn’t even recognize and has chosen the Fiend. The night Alexa slapped her was when Nikki finally knew it was over, and then she suckered her in during their match. Cross is actually glad about it though because now she knows that Bliss is gone.

Cue Lacey Evans and Peyton Royce to interrupt to mock her over buying Bliss’ crocodile tears. Cross tells Peyton to shut up and asks if Lacey has ever had a real friend. Lacey: “Pey Pey and I are friends.” Peyton: “No we’re not.” Lacey: “Uh, fake friends.” Peyton: “Yeah fake friends.” Lacey thinks Nikki and Bliss were never friends in the first place (as she keeps trying to put her arm around Peyton but gets shoved away over and over). The challenge is on and we actually take a break before the match.

Cross takes her down by the arm to start and shouts about Bliss a lot. A belly to back suplex gets two but Lacey gets on the apron and throws in her napkin. That’s enough of a distraction for Peyton to get in a cheap shot and stomp away in the corner. The full nelson with the legs over the ropes keeps Cross in trouble but a spinwheel kick only hits corner. Cross is back with the clotheslines and a running crossbody in the corner gets two with Lacey making the save. The distraction lets Royce hit Deja Vu for the pin at 4:22.

Owens hammers away to start and the brawl is on early. They head outside with Uso sending him hard into the steps and hammering away with right hands. Back in and Uso works on the arm by bending it around the rope. Owens fights back with a backsplash but gets sent into the post. The suicide dive is cut off though and Owens catapults him into the post. A superkick over the announcers’ table has Jey in more trouble and we take a break.

Back with Owens hitting a Swanton off the apron, only to have Jey take the arm apart again. The armbar goes on for a bit until Owens fights up with the good arm. The Pop Up Powerbomb doesn’t work due to said arm so Uso hits a superkick for two. Owens gets the knees up to block the Superfly Splash but Jey sends the shoulder into the post again. That’s enough for Uso, who grabs a chair and unloads for the DQ at 11:56.

Post match Jey is held back so Owens gets the chair and massacres Uso. Owens says if Reigns has a problem, come say it to his face. He gets on the announcers’ table and says he’s the head of it, There’s a Stunner to Uso and Owens has a seat, asking where Reigns is. Owens says he’ll be waiting as we see Reigns seething to end the show.

AJ Styles is on commentary. Sheamus throws Morrison around to start and then gives him a rather large boot to the chest. McIntyre come in to run Morrison over and it’s ten forearms each to Miz and Morrison’s chests. Sheamus shouts at AJ to come get in here and goes outside to get in his face. Miz’s cheap shot doesn’t work but an Omos distraction lets Morrison hit a dropkick through the ropes.

We take a break and come back with Miz driving knees into Sheamus’ back and ripping at his face. Morrison comes in to knee Sheamus down in the corner and we hit the chinlock. That’s broken up in a hurry with the hot tag bringing in McIntyre to clean house. AJ does not exactly approve as McIntyre snaps off belly to belly suplexes and then nips up. The Claymore is loaded up but AJ comes in with the Phenomenal Forearm to McIntyre for the DQ at 9:50.

Old friends are back:

Post match AJ has Miz and Morrison hit a bunch of finishers on McIntyre (I must have misses Sheamus being taken out) but Miz argues with Styles over bossing him around. McIntyre fights up and takes care of Miz and Morrison, leaving AJ to need Omos to get him out of trouble. Omos carries AJ away to end the show. 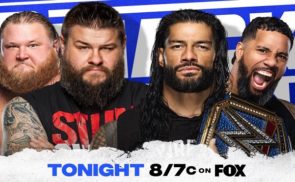