We close out August with Daniel Bryan on a bad run of luck. For four straight shows now he’s been left laying by Randy Orton and the new Corporation, but luckily for him the fans are still WAY into him. That’s only going to last for so long though until the fans start to view him as a guy who got lucky against Cena instead of an elite level star. Let’s get to it.

Theme song opens us up.

We get things going with MizTV featuring guests Big Show and Dolph Ziggler. Miz says the three of them were all on the stage along with forty other superstars while Daniel Bryan had to run the Shield gauntlet. They were all told that if they said anything, HHH would make them miserable. However, Miz thinks it’s time for them to speak up about how the WWE is being run. Big Show says that was one of the hardest things he’s ever had to do. Ziggler is nervous to say anything and says let Big Show keep going. Miz is about to say something when HHH cuts him off.

HHH thinks MizTV is cool but wants to hear what Miz was about to say before he came to the ring and why Miz isn’t in a suit. Miz says you never know when a fight could break out and wants to know if he can ask HHH a question. HHH says no he can’t and asks why these three are taking the Daniel Bryan route and making it personal. They shouldn’t be jealous of Randy Orton. After all, Orton isn’t a guy who talks a lot but can’t back it up or a guy who just happens to be big, but (to Ziggler) at least he’s big enough.

HHH talks about how Orton being champion is what’s best for business, meaning it makes more money for all of them. Miz is jealous because he can’t get near the WWE Championship again, but since HHH is in a good mood he’s giving Miz a shot at Randy Orton tonight. HHH saw Ziggler looking miserable because he lost to the Shield in a 3-1 handicap match, so tonight he gets a rematch with all three guys. That leaves Big Show, who gets the night off. Instead he gets to sit next to the announcers and do nothing about it whatsoever. Show looks like he wants to chew through steel but goes and sits down.

Randy Orton vs. The Miz

Non-title of course with Big Show at ringside. Orton takes Miz into the corner to start and we get a clean break. Miz jumps over Orton in the corner and clotheslines him down but Orton easily escapes a Figure Four attempt. Orton staggers him with a headbutt and gets two off a dropkick. Miz is tossed to the floor as Orton is doing a good job at making his usual spots into heel moves. Miz is dropped back first onto the barricade for two back inside.

We hit the chinlock but Miz fights up and pounds on Orton in the corner until the referee pulls him away. The running clothesline in the corner sets up Miz’s top rope ax handle, only to have Orton kick him out of the air. The Elevated DDT is countered into a backdrop to the floor….and here comes Shield as we take a break. Back with Shield standing between the ring and the ramp as Orton sends Miz into the barricade.

The fans chant for Big Show as Orton throws Miz back inside for two. Orton does the circle stomp and hits another chinlock but Miz fights up with some elbows. A neckbreaker gets two for Miz but Orton escapes the Skull Crushing Finale. Now the Elevated DDT connects but Miz counters the RKO into a backslide for two. A dropkick to the knee sets up the Figure Four and Orton is in trouble. Randy finally makes a rope and jumps to his feet for the RKO and the pin at 13:02.

Shield comes in for the post match beatdown but Bryan makes a save with a chair, sending the place into a frenzy. THIS is what they’ve been needing to do for weeks now.

Vickie yells at Bryan for what he just did and gives him a match with Ryback as a result.

We recap the Punk/Heyman/Axel segment from Raw. Thank goodness the fans were chanting Walrus instead of Boring because that was a great segment.

Sandow says he’ll win and win and win until he’s world champion. Other than the winning part, he might be right and that’s kind of scary. Rob hits a quick kick to take over and jumps up top for a legdrop of all things, good for two. Sandow comes back by sending him shoulder first into the post followed by the Russian legsweep and the Wind-Up Elbow for two. Big Show is still at ringside in case you were wondering. Sandow hooks the chinlock but Rob quickly fights up and snaps off a hurricanrana. Damien slows RVD down with a big boot but Rob hits a springboard kick to the face and the Five Star gets the pin at 2:37.

Post match here’s Alberto who insults both Ricardo and RVD. Del Rio warns RVD to not sleep with the dogs because he’ll wake up with fleas.

Rollins starts for Shield but Dolph knocks the other two members off the apron before going after Seth. A cross body gets two for Dolph and he pounds away on Rollins’ head. Rollins gets him into the Shield corner for some stomping and it’s off to Reigns. A Samoan drop from the Samoan gets two and Ambrose comes in to talk trash and pound away. The fans chant for Ziggler as JBL is having a great time watching this destruction.

Dean shouts at Ziggler in the corner so Ziggler slaps him in the face and backdrops the US Champion to the floor. Ziggler can’t follow up though so it’s back to Rollins who counters the Fameasser into the always awesome looking buckle bomb. Reigns comes in off a blind tag and spears Ziggler out of his boots for the pin at 4:00.

Here are Heyman and Axel with something to say. Axel introduces us to another clip of Heyman attacking Punk on Raw. Heyman wants to know what the fans want from him. Are they mad at him for the beating he gave his prodigal son on Monday? He isn’t sorry for what he did because the fans voted him into that situation. Did they think he was going to take his beating like a man?

For 434 days he and Punk were the reigning WWE Champion and every single one of their opponents were put down using Heyman’s plans and Punk’s implementation. Every time Punk has come up against Heyman, it’s been Punk on his back, looking up at his mentor. This brings us to Night of Champions, where Heyman might have to face Punk on his own again.

If that happens, the fans are expecting to see Punk beat Heyman into the ground, and Heyman is indeed afraid. If Punk gets his hands on him, you won’t see Paul Heyman again. However, that fear could be Punk’s worst enemy. Look at what Heyman has done to Punk out of love and think about what he could do if he was facing a beating at Punk’s hands. More greatness from Heyman here.

Wyatt Family vs. Tons of Funk

Harper starts with Tensai and the fat man knocking Luke to the floor. Tons of Funk hit a double standing splash to Harper but Rowan breaks up the big splash. Harper kicks Tensai in the face and it’s the discus lariat and splash combination for the pin on Tensai at 1:13. This was pretty sloppy for a seventy five second match.

Los Matadores are still coming. That hasn’t changed in the last hour.

We look at the AJ promo against the Total Divas from Monday.

Ryback has a new split color singlet. Thankfully we only hear about the Escalade for the first time during Bryan’s entrance. Bryan charges right at him but gets shoved across the ring with ease. A slam puts Bryan down as Big Show looks on with a worried look. Ryback fires off some hard shoulders into the corner for two but after staggering Bryan with a headbutt, Ryback misses a charge into the post.

Bryan starts firing off the kicks and hits a running dropkick to the chest in the corner. Ryback rolls to the floor for the FLYING GOAT as Orton strolls down to the ring. The distraction allows Ryback to run Bryan over as we take a break.  Back with Bryan fighting out of a chinlock and firing off kicks to the legs.

Daniel loads up the running clothesline but gets caught in a hard spinebuster for no cover. The Meat Hook connects for two s Ryback loads up a belly to belly superplex. Bryan doesn’t feel like dying today so he headbutts Ryback down and hits the missile dropkick. Here come the kicks and the big one to the head is good for two. There’s the YES Lock but Orton comes in for the DQ at 9:25.

Result: Daniel Bryan b. Ryback via DQ when Ryback interfered (9:25)

Bryan is ready for Orton and catches him in the YES Lock but here’s Shield for the save. Big Show is out of his chair and looks like he’s about to explode. He finally slides into the ring but doesn’t touch anyone. HHH comes raving down the aisle, demanding that Big Show get out of the ring. Show stays in the ring and stares down at HHH before finally climbing out. He looks like he’s about to cry as HHH demands he go to the back.

The beating on Bryan continues as the announcers go into serious silent mode. Orton has Shield hold Bryan for more punishment and walks Bryan around the ring to look at all the people. The Batista thumbs up/down thing sets up the Triple Bomb and in case we haven’t channeled enough heel stables for you yet, Orton spray paints NO on Bryan’s chest to end the show. This would be the fifth consecutive show where Daniel Bryan has been left laying since winning the WWE Championship.

This concludes our live coverage of Smackdown.  Make sure to join us on Monday for Monday Night Raw at 8PM EST.

Hulk Hogan Comments On His Relationship With The WWE 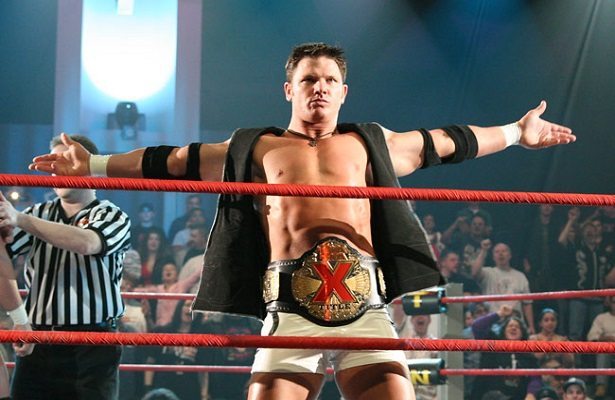