We’re still in Virginia for the other main event from Hardcore Justice. Tonight’s main event is the Mafia vs. the Aces in a big ten man brawl with the person taking the fall being banished from Impact Wrestling forever. Other than that we’ve got another four way match for twenty points in the BFG Series. We’ve got about a month left in the entire Series so points are becoming more and more important. Let’s get to it.

We open with the Aces and 8’s in the back. Ray and Anderson get in an argument over whose corner Tito Ortiz will be in tonight. The world champion tells Anderson to worry about his own business.

Here are Roode, Daniels and Kaz to open us up in the arena. Roode congratulates Ray on becoming a two time world champion by screwing the system. Now it’s Ray with the target on his chest and it’s going to be one of them that will take the title from him. Roode talks about setting the tables for 20 points in the Series last week and Kaz says he did the same. Tonight Daniels will complete the sweep for the Extraordinary Gentlemen’s Organization because he’s the best street fighter in TNA.

Roode says they’re 25% of the BFG Series but they should be 1/3. They want to add Austin Aries to the group because it’s the best chance Aries has at becoming the world champion. Instead they get Storm and Gunner, who are tag champions in case you had forgotten. Storm doesn’t like hearing Roode talk about trust because it’s only a matter of time before Roode turns on Daniels and Kaz. James takes off his shirt and is ready to fight, with the tag champions clearing the ring. Apparently this is going to be a tag match.

Non-title. It’s a brawl to start with the champions in control as we go to an early break. Back with Roode sending Gunner into the corner and chopping away before Gunner comes back with forearms of his own. Kaz comes in with a spinwheel kick for two as Storm makes the save. Everyone is in jeans here to give it more of a street fight feel. Roode comes back in for some shots of his own before Kaz gets two off a legdrop.

Gunner no sells a kick to the chest and hits an Irish Curse to allow for the double tag. Off to Roode vs. Storm with James cleaning house. The corner enziguri drops Kaz and a top rope elbow gets two on Roode. Everything breaks down and Storm hits the Closing Time to put Roode down. Roode pulls the referee in the way of the Last Call, so Kaz takes the kick instead. A low blow from Bobby is enough for the pin on Storm at 9:45.

Aries thinks he has a lot of offers on the table and has an idea.

Non-title. Sonjay tries to dive onto the champion during the entrance but Manik dives to safety. Manik hooks a quick Black Widow submission hold but Sonjay rolls out. They’ve moving very fast out there. Dutt misses a big kick to the head but hits a standing moonsault for two. Sonjay puts on a modified Octopus Hold before shifting to a double arm choke.

Back up and Manik does his land in the ropes spot and avoids a charging Dutt to send him to the floor. A slingshot dropkick gets two for Manik and he counters a Rocker Dropper into a sitout powerbomb for two. Manik charges into a boot in the corner and hits a running boot of his own, setting up a springboard splash for two. The moonsault double stomp doesn’t connect and Manik hits his wheelbarrow gutbuster for the pin at 4:26.

Anderson gives the bikers a pep talk for the main event.

Sting and the Mafia huddle.

This is a street fight for twenty points. It’s a big brawl to start with SuperMex clotheslining Bradley to the floor so Daniels can get two off a rollup. Eric Young is in Park’s corner because TNA loves their wacky pairings. Bradley breaks up a cover by Hernandez with a chair to the back before wrapping the chair around Hernandez’s neck to ram it into the corner. Park is back up and helps SuperMex double team the other guys while doing his “Who me?” schtick. Bradley and Daniels are both splashed in the corner and we take a break.

Back with Hernandez cracking Daniels in the back with a kendo stick but Daniels backdrops him on the stage. Back in the ring and park avoids a big boot from Bradley in the corner but Bradley gets in a shot to stop his momentum. Park takes Bradley down to avoid a chair shot but his Boston crab is broken up by a Roode/Kaz distraction. Eric Young tries to make the save but gets beaten down as well. Bradley is back up to beat on Daniels in the ring. A big boot sets up a chair shot to the back followed by a suplex onto the chair.

Kaz breaks up the Boom Stick as Hernandez hits the charge from the ramp over the ropes to take Daniels down. Daniels escapes the Border Toss and Austin Aries is here. His distraction allows Daniels to hit a running STO on Hernandez, but after high fiving Roode, Aries lays out Daniels with the brainbuster. Bradley knocks out Park with brass knuckles but they bust Park open, meaning it’s Abyss mode. The Black Hole Slam is good for the pin on Bradley at 12:20.

We recap the far too long Brooke Hogan/Bully Ray saga.

Here’s the new world champion, flanked by Tito Ortiz, for his championship celebration. Ray asks how it feels to have the wool pulled over your eyes again. Do you know who he is? He’s Bully Ray, the world champion. Notice that he didn’t say the two time world champion, because he doesn’t count Sabin’s fluke win. This brings him to his new best friend: Tito Ortiz. Tito says he’ll knock Rampage out again on November 2nd.

Ray says if you thought that was a surprise, there’s an even bigger shock. This one is about Ray and his woman. It’s time for the world to know about them. He tells Brooke to come out here but it’s Brooke Tessmacher instead of Hogan. They kiss in the ring and Ray says now he has the hot Brooke. Ray brags about being unstoppable and says there’s only one thing left to do. Brooke bites his ring off and spits it out, which I guess is writing Brooke Hogan off TV. I think this was supposed to be some big surprise but no one seemed to care.

ODB shoves her around to start and rams Gail face first into the buckle. Gail heads to the floor for a breather as ODB rubs her own body in the ring. Back in and Gail takes her down by the arm and sends it into the buckle. ODB is put on the top rope and taken down by a shoulder breaker for two before Gail hooks a hammerlock.

Gail goes to snap the arm over the ropes but gets hit low to give ODB a breather. Back to the corner for ODB’s crotch rams (don’t ask if you don’t know) followed by the middle rope Thesz Press for two. A superplex puts Gail down but it hurts ODB’s shoulder again, meaning it’s only good for two. Gail pops back up with a crucifix for the pin at 6:42.

Jeff Hardy talks about what winning the Bound For Glory Series means.

Austin Aries says he’s going to win the world title with his own skills alone.

Hulk Hogan will be back next week after meeting with lawyers.

Chris Sabin says it sucks that Aces and 8’s keep interfering. Rampage had his back and Sabin will get his revenge.

The loser of the fall is gone from TNA forever and the Mafia comes in down a man due to Angle going to rehab. Before the bell Anderson calls out Ray to sit on the stage and watch. Anderson goes on to say that the Mafia can pick someone to lay down without a fight. Sting says no way because they want to fight. There go the lights for some reason and here’s AJ Styles. He throws the hood back and the music changes to Get Ready To Fly, meaning the Phenomenal One is back and part of the Mafia tonight.

It’s a huge brawl to start until we finally get down to Magnus vs. Wes to start. Magnus throws him into the corner and brings in Joe to pound Brisco down. Joe hits the enziguri in the corner for two before it’s off to Garrett. AJ comes in for the fireman’s carry flip into a backbreaker as we take a break.  Back with Magnus in trouble in the Aces corner. The bikers take turns on the Brit with everyone getting in shots.

Garrett gets two off a clothesline as the fans chant YES. Anderson comes in for a suplex before it’s back to D-Von for a neck crank. The fans tell him he sucks and Taz rants about Hogan a bit. The back elbow puts Magnus down again and D-Von Spinaroonis up. Back to Knux for some choking but Magnus scores with a quick DDT for a breather. There’s the hot tag to Sting and everything breaks down. Jackson starts cleaning house but Knux gets in a cheap shot.

Sting takes Knux down with the Death Drop and puts on the Deathlock but D-Von makes the save. Knux can only get two though and things settle down again. AJ gets the hot tag and hits the springboard forearm to D-Von. A backfist and a standing enziguri get two for Styles but everything breaks down again. Styles loads up the Clash on D-Von but has to hit the Pele on Anderson. D-Von spears Styles down but AJ comes right back with the Clash to get rid of D-Von at 16:16.

Taz is furious to end the show. 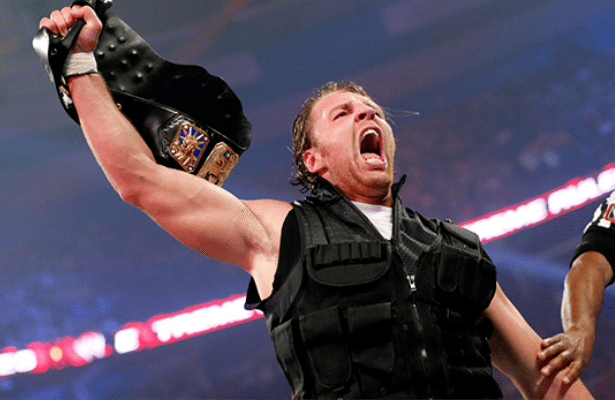 Dean Ambrose Talks About The Shield, Working For the WWE, and More