Happy days are here again! The wrestling business can be rather strange at times with one change happening after another, often in short order. Some of the changes that take place can make a difference in both the long and short terms, with both of them having an impact. The bigger ones of course have the bigger impacts and it turns out that one change from late last year made quite the impact.

Back in 2019, Paul Heyman was named the Executive Director of Monday Night Raw. The change came as WWE needed to fix a few things before their ratings and audience dwindled even further than they already had. Heyman was a popular name among wrestling fans due to his time running ECW, but that was almost twenty years ago. But how do things work out for him in modern times?

According to Sportskeeda.com, morale in the Monday Night Raw locker room has become much more positive since Heyman took over. This has been due to a variety of roster moves, with Randy Orton taking some of the pressure off of Seth Rollins as the top name on the show. In addition, names like Luke Harper and Mike Kanellis being gone have made things stronger through subtraction.

Heyman has been around in front of the camera too. Check out some of his better beatings: 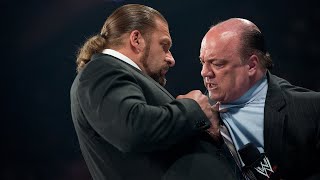 Opinion: This is one of those things that can go a long way to helping the show get better. If there is nothing positive to think about behind the scenes, there is only so much that can be done to make the show work in front of the camera. Hopefully this continues and gets even better and maybe Monday Night Raw itself can get better. It has been bad long enough now so a change is needed.

Do you like Heyman’s time on Monday Night Raw? How do you see the show going in the future? Let us know in the comments below.