Things are picking up again around here, as they so often do as we come up on a big match. The big story continues to be the multi-man World Title match at the 14th Anniversary Show, but we also have the Top Prospect Tournament continuing, as well as the continuation of BJ Whitmer vs. Steve Corino. Let’s get to it.

Chris Sabin sits in on commentary. Shelley starts firing off chops as Sabin’s early advice doesn’t seem to have done much good. Kazarian’s dive is blocked with a kick to the head and it’s off to the knee to keep Alex in control. It doesn’t last long though as a slingshot DDT takes Shelly down as we go to a break. Back with Kazarian smacking Sabin in the face as Steve Corino calls in to the show. Corino is sick about what happened to Colby last week and he’s going to be back next week to deal with BJ Whitmer.

Shelley avoids a top rope legdrop and clotheslines Kazarian out to the floor. Back in and Kazarian grabs a swinging neckbreaker and a running Downward Spiral for two, only to get shoved away off the Killswitch. Shelley’s top rope splash hits knees though, only to have Kazarian pull out a hammer. Alex takes it away and glares at Sabin, setting up Sliced Bread #2 for the pin at 11:15.

Before the match, Truth Martini suggests that the Boys need a daddy instead of someone teaching them to be a man. Joey takes him into the corner to start and does the WHO’S YOUR DADDY line. Castle easily takes over with a slam but does a big walk around the ring instead of diving through the ropes to take Joey out.

However, Martini crotches Castle on top, allowing him to get in the ring for some dancing. The Boys low bridge him to the floor though, leaving us with only the match for a change. A World’s Strongest Slam gets two for Joey but Castle starts the comeback with a running knee in the corner, followed by a running boot to the jaw for good measure. The Bang A Rang is enough to put Joey away at 3:35.

Speaking of Silas Young, here he is to make a final offer to Brent and Brendan (the Boys). As the Beer City Bruiser helps beat Castle down, Silas talks about how the Boys need to make their decision, only to have them fight back against Silas. That just earns them another beating and the villains get to yell a lot.

Ortiz is described as a Bam Bam Bigelow type and was trained by Tommy Dreamer. Leo on the other hand has an MMA background. Ortiz gets knocked to the floor to start but blocks a charge with a big forearm to the face. Back in and Ortiz misses a Frog Splash, allowing Leo to go up for something like Xavier Woods’ Honor Roll from the top for two of his own. After a dive over the top to stagger him, Ortiz kicks Leo in the head to stagger him again. A belly to back flip suplex (as in Leo keeps going until he lands on his face) sends Ortiz to the next round at 3:45.

We look back at Final Battle to see the All Night Express becoming the #1 contenders.

War Machine (Hansen and Rowe in case you’re not familiar) are defending. Hansen and Titus get things going with the much bigger champion running him over. King comes in off a blind tag and an atomic drop/clothesline combination staggers Hansen, who comes right back with a double clothesline to take over again. It’s off to Rowe who terrifies King back into the corner for a tag to Rhett.

The challengers take over but Hansen breaks up what looked like a powerbomb/neckbreaker combo. Rowe slams Hansen onto King for two, followed by Hansen powerbombing Rowe onto Titus as we take a break. Back with Titus low bridging Hansen to the floor but being pulled out of the air on a dive to Rowe. Everything breaks down with King being sent hard into the barricade with both teams diving back in at nineteen.

Titus will have none of this staying in the ring thing though as he and Hansen both dive through the ropes for huge crashes. Back in and King has to escape Fallout but he might have pulled the referee into the path of Hansen’s running knees. Titus pulls out a table but King gets driven through it, drawing a DQ at 11:02 as the referee wakes up just in time.

Result: All Night Express b. War Machine via DQ when King was sent through a table (11:02)

The teams keep brawling to end the show as the fans want to see them fight. 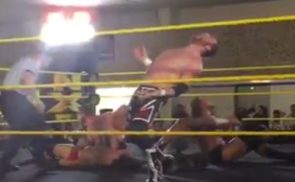 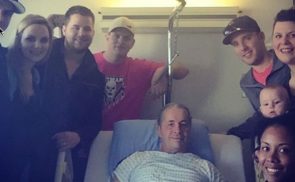