Season two is on a roll to start as last week saw things hitting the ground running with Pentagon now as a major force for good and apparently targeting Mil Muertes. Other than that we need to find out where Dario Cueto is and whether or not he’s going to charge people to be murdered by Matanza. Let’s get to it.

We open with a recap of last week’s opening and Ultima Lucha.

Prince Puma is working out in the back as he flashes back to the Mil Muertes lost. This brings in Pentagon Jr. to say they’re teaming tonight against the Disciples of Death. After that though, Pentagon is coming for him. They do a choreographed fight complete with sound effects before Pentagon walks away.

The fans are chanting for Pentagon Jr. as Muertes (with his arm in a sling) is sitting on his throne again. Vampiro doesn’t want to talk about what happened last week.

Killshot starts fast with a kick to the face before Matrixing into a nipup to avoid Johnny’s kick. They head outside with Killshot hitting a dive, only to get ripped in half by a spear. Killshot comes back with something like a cutter, only to have Johnny kick him in the face. The End of the World is broken up with a superkick and a jumping hanging DDT. Killshot’s 450 gets a very close two but the referee gets bumped, allowing Mundo to kick Killshot low. The End of the World is enough to give Johnny the pin at 4:37.

Post match Mundo calls out Muertes but gets Cage, now seemingly a BIG face, instead. Cage says he’s 100%, unlike that champion who has to sit on his throne. If Muertes wants a real challenge, Cage is ready to break him in half. Mundo is ready to fight right now but bails from Cage instead. Cage motions that he wants the title, allowing Mundo to get in a cheap shot. That’s fine with Cage as he runs Mundo over and presses him up, sending Johnny bailing.

Marty the Moth still has Sexy Star tied up and shows her….a dead moth. His sister has said that it’s time for them to go back to the temple so Star can blossom into a butterfly.

PJ Black (Justin Gabriel) is known as the Darewolf, who always wants the next big thrill. In this case it means beating up some bikers (wearing lucha masks) outside of a hotel before coming to the Temple.

The Mack vs. PJ Black

Striker declares (Willie) Mack a cross between Joe Frazier and Porkchop Cash. Black headlocks him to start as Striker keeps using the Willie name, even though that’s not his name here. Vampiro kind of calls him out on it and it’s time for some chops (Vampiro: “He slapped the South African out of him right there.”). Mack gets the better of it for two, followed by a Samoan Drop and a standing moonsault for two on Black.

Black flips out of a German suplex and grabs a Blue Thunder Bomb. The top rope Lionsault get two on Mack but he rolls away before the 450 can launch. Black goes up for a springboard but dives into a Stunner (supposed to be a cutter but Black landed on his knees) for the pin at 4:45. Striker: “Looks like he failed his wellness test.”

Kobra Moon, a new woman who looks like a vigilante super heroine, debuts next week.

Vampiro talks about Pentagon Jr. taking the dark path to the light, basically confirming Pentagon’s face turn. The Disciples jump him from the start but Pentagon hits a quick flip dive to take all of them out. The numbers start catching up with our heroes though and we get into a more standard match. Puma gets beaten down for a bit until a kick to the face allows for the hot tag off to Pentagon.

The new hero starts firing off a bunch of Sling Blades and chops to the chest, only to get in a shoving match with his partner. Everything breaks down again and a hanging double arm DDT drops Puma. Prince drops one of the Disciples and hits the 630, only to have Pentagon tag himself in and steal the pin at 7:35.

Post match Pentagon and Puma slug it out but Pentagon can’t break the arm, despite staring out at Vampiro.

We cut to the back for the final stinger. Someone is sitting with a hood over his face as someone else talks to him about Dragon Azteca being his mentor. The man in the hood is revealed as the new Dragon Azteca and the speaker says that is his new identity. The speaker wears a mask as well and he’s very happy with his own. We pan over and it’s…..REY MYSTERIO. 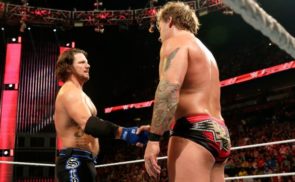 Seven Must See Dream Matches For AJ Styles in WWE 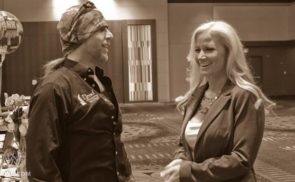