It’s a rare occurrence but we actually have a major match for tonight with a strong build to go with it. In this case we have AJ Styles vs. Chris Jericho II after Styles won his first major match in WWE by defeating Jericho a few weeks back, which has gotten in Jericho’s head. This could be high quality stuff if they’re given enough time so let’s get to it.

Here’s Chris Jericho for a chat to get things going. Jericho gets right to the point: he doesn’t think much of AJ because Styles debuted and started calling himself phenomenal. You have to earn something like that, just like Jericho earned it in this arena during his ladder match against Shawn Michaels. That means it’s time for AJ to take his beating right now because the match is opening things up.

Scratch that actually as the Social Outcasts come out to interrupt.

AJ may be the Phenomenal One, but this is the Phenomenal Four. “Well three tonight because Bo is still in the studio.” The Outcasts argue over whether the team is called Axel Rose or the Social House Cats but Jericho punches Slater in the face and the good guys clear the ring.

This is joined in progress after a break with AJ dropkicking Axel before it’s back to Jericho for a suplex. Jericho doesn’t seem happy with having to tag AJ back in so Styles can’t show off as much. A delayed suplex drops Axel and Jericho still doesn’t want to bring AJ in again. Axel continues to get beaten around the ring with the good guys dropping him off a double chop.

Rose finally gets in a knee to AJ’s back from the apron so Curtis can slap on a chinlock. A Pele Kick drops Axel and AJ punches Rose in the face, allowing the tag off to Jericho. Chris cleans house and dropkicks Slater off the apron, followed by the Lionsault on Rose. AJ tags himself in though and the springboard forearm puts Adam away at 5:16 shown.

We look at some of the reactions to Bryan’s retirement.

Long recap of Lesnar/Ambrose/Reigns from Raw. Brock will be here next week.

Here are the freshly heel Dudley Boyz with something to say. Bubba, now looking more like Bully Ray, talks about how everyone is talking about Daniel Bryan when people should be talking about them. D-Von thinks people are forgetting that they’re the baddest team of all time. That’s what the Usos forgot and that’s what the Dudley Boyz had to remind them on Monday.

There are a lot of tables around ringside and it’s the last time you’re going to see them around here. Bubba orders the stagehands to get rid of these tables because the tables didn’t win all those titles. Instead of wanting tables, the fans should be chanting for Bubba and D-Von. There’s one table left in the ring but Bubba only gets as far as “D-Von, GET THE” before dropping the mic and carrying out the last table.

Becky is on commentary. Banks quickly takes it to the mat and hammers on Naomi’s face. Becky talks about wanting to win on her own but still respecting Sasha as Naomi gets in some shots to the ribs to take over. The fans are behind Banks as she trips Naomi up for the double knees to the ribs for two. Back with Naomi missing a jumping kick to the head, allowing Sasha to get in a crucifix for two.

Sasha throws her to the floor and out onto Tamina as Lawler eggs Becky on about Sasha jumping her at the Rumble. That causes a bit too much smirking though and Naomi drives her back first into the apron with a Russian legsweep to take over. Back in and Naomi goes nuts with some rapid fire kicks (almost looking like she was dancing), capped off by an enziguri to knock Sasha silly.

We hit a chinlock for a bit before Sasha snaps off a headscissors to put both women down. Some clotheslines and another headscissors drop Naomi and a pair of knees in the corner get two. Tamina trips Sasha up to change control again, drawing Becky out of her chair. Naomi misses the split legged moonsault but Sasha goes outside to kick Tamina in the face. Back in and Naomi grabs a rollup, only to have Sasha reverse it into the Bank Statement for the tap out at 12:34.

AJ agrees that he’s a redneck (and proud of it) but he’s certainly not a rookie. Tonight he’s showing Chris Jericho why he’s known as the Phenomenal One.

Here are the Wyatts with something to say. Bray talks about sending people forward, only to have the bodies sent back in an urn. In Greek mythology, the titans fought the new gods but were conquered by Zeus. Today, their mythology is now our reality. Bray is now the king of the gods and these men are his army. You have seen what they have done to Kane, Big Show and Ryback but they have their sights set on ridding WWE of its titans.

Harper says that the largest titans can be turned to mere mortals. Rowan thinks there’s no point in resisting so bow your heads and accept your fate. Finally Strowman says the seas will boil because everything is changing. Bray is the angel of the dirt and the eater of worlds. This war has only just begun so follow the buzzards.

The heels jump the heroes from behind to start and it’s Stardust kicking Neville very close to low as we get going. Ascension takes turns slowly stomping in the corner before Viktor slaps on a chinlock. The Dragons are chased off the apron, allowing Neville to snap off an enziguri. The hot tag brings in Kalisto to speed things way up. Cara launches Kalisto into a dropkick on Viktor and it’s a Salida Del Sol into a Swanton into the Red Arrow to put Konnor away at 2:59.

We get a long recap on Bryan’s retirement, including clips of his mainstream coverage, the retirement speech and his career, set to a song called Streets of Gold.

AJ drives him into the corner to start and the fans think Styles is awesome. The drop down into the dropkick staggers Jericho but he trips AJ to the mat. That’s fine with Styles as he nips up into a hurricanrana to drop Jericho again. A big chop puts AJ down though and the springboard dropkick knocks him to the floor as we take a break.

Back with AJ fighting out of a chinlock and sending Jericho into the corner to break up a bulldog attempt. It’s time to get creative as AJ hits the running forearm to a seated Jericho, only to have Chris blast him in the face to take over again.

Jericho tries to go up but gets caught with a Pele to put him back on the mat. A butterfly backbreaker and an enziguri get two for Jericho but he gets dropkicked out of the air. Lawler thinks that young whippersnapper AJ’s undoing will be his long hair getting in his face and causing him to miss something. Chris grabs the rope to block a dropkick and the Lionsault gets two more.

Back up and AJ grabs a fireman’s carry into a backbreaker but Chris slips out of the Clash and gets the Walls. The hold has to be dragged back to the middle though and AJ counters into the Calf Crusher. After some very close near taps, Jericho makes the ropes for the break. Chris heads outside so AJ takes him down with a slingshot dive. Back in and Jericho breaks up another springboard, setting up the Codebreaker for the pin at 15:57. 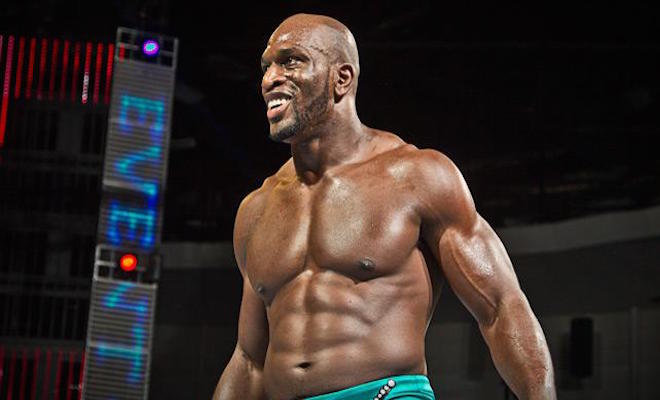 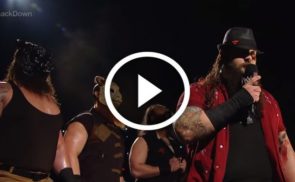 The Wyatt Family addresses their most recent scourge through WWE: SmackDown, February 11, 2016