We’re wrapping up the Bethlehem tapings here and the big story is Matt Hardy allowing his brother Jeff to be put out of action thanks to a piledriver through a table at the hands of Eric Young. We’ll also be hearing from Ethan Carter III for the first time since he lost the title as well as Tyrus. Let’s get to it.

Ethan tells the camera crew to be at a specific place at 4pm for their interview.

Here are Matt Hardy and company to open things up. Matt talks about working with people you hate and says it was karma that sent Jeff through that table. How dare Jeff accuse Matt of tarnishing the World Title? Reby and Matt never believed that Matt wasn’t living in Jeff’s shadow but it was Jeff’ jealousy that caused his injury. This brings out Eric Young and Bram with the former shouting about how he took out Jeff and now the World Title goes through him.

Now it’s Kurt Angle coming out to get straight to the point: he gets Hardy tonight for the title. A brawl is teased but here’s Beer Money to back Angle up. Cue Abyss/Crazzy Steve/the Wolves for a big brawl with the good guys clearing the ring. Roode announces a four on four hardcore fight.

We recap the Feast or Fired reveals from last week, including Bennett and Maria’s interruption.

Drew feels like he’s won the lottery. Tyrus comes up and tells him to walk away with the briefcase because it’s a target on his chest. That sounds like a challenge.

O’Shea pounds him down to start and here’s that woman from a few weeks ago, now known as Raquel. A clothesline puts Aiden on the floor but Lashley goes over to ask Raquel who she is. Back in and Aiden’s chinlock doesn’t do much as Lashley hits a quick spear for the pin at 4:48.

Here’s Maria to talk about women’s wrestling. Women’s wrestling may not need a savior but it needs a leader to point it in the right direction. She is the first lady of professional wrestling and she is the arrow and leader. The Knockouts division needs to be saved so out with the old and in with the new. This brings out Gail Kim to proclaim her respect for Maria, as is the custom throughout TNA. Maria says Gail is just a wrestler but that’s not all she can be. Gail is even more serious because this division is about wrestling and nothing more. They can fight right now but Maria leaves.

The Wolves know Beer Money is coming for the titles at some point. Storm shows off the Feast or Fired briefcase but they agree to worry about that later.

This is a Hardcore War, meaning two people (Crazzy Steve and Davey Richards) start and fight for two minutes before someone else comes down to make it two on one. Everyone brings a weapon of their choice and it’s one fall to a finish. Davey’s chair is easily dispatched by Steve’s ball bat wrapped in chains but Richards uses the bat to knock the chair into Steve’s face.

Bram is in third with a turnbuckle rod and the heels take over on the floor. It’s James Storm in fourth with a beer keg that he takes forever to get to the ring. Eventually he puts it between Bram’s legs and crushes it with a chair, which the fans implore him to do one more time. Eric Young is in fifth and cleans house with a kendo stick as we take a break.

Back with Eddie in as well and the good guys in control. Bram and Young take over until it’s Abyss to complete the villains’ team with Janice. Eddie dives on the monster before he can get anywhere but Storm is holding his leg. Abyss cleans house as he is known to do and it’s Bobby Roode to complete the field.

Roode’s hockey stick gives the good guys control again and we start the parade of secondary finishers. A seven man team suplex lets all four heroes do the BEER MONEY shout but that much time being wasted allows Abyss to get us and clothesline everyone. Davey takes a Black Hole Slam as Eddie and Bram fight to the back. Steve mists Davey, allowing Abyss to hit him with a title, allowing Steve to get the pin at 19:30.

Angle and Galloway would love to face each other again, perhaps for Angle’s title via Drew’s briefcase.

Neither guy gets an entrance. Tyrus gets in a cheap shot to start but Drew hammers away in the corner. We’re already in the nerve hold for a bit before Tyrus misses a charge into the post. Drew chops away and drops him with a top rope shot to the head. That earns him a Heart Punch from Tyrus and some BORING chants from the crowd, only to have Drew powerbomb the big man out of the corner. The lights go out and here’s Mike Bennett with the briefcase to knock out Galloway for the DQ at 5:41.

Post match Bennett looks down at Drew and does his usual “do you believe in miracles” speech.

Angle talks about possibly retiring as champion when Lashley comes up to say how awesome it would be to win the title back from Angle in the same place Kurt took the title from him last year.

Not so fast actually as Helms never said the match was against him. Here’s what we get instead.

Lee is challenging of course. Tigre is in early trouble but a dropkick sends Lee to the floor. A running clothesline drops the champ for two and it’s time for some mask ripping. Tigre comes back with a dropkick and dive over the top but that cool standing double stomp puts Uno down again. The fisherman’s buster into a small packages gives Lee the title at 4:50.

The big interview with Ethan is a promo about being undefeated for two years and then realizing that he’s kind of been a jerk. The winning got to him until Matt Hardy took everything to put him down. It took the thing he loved the most, the TNA World Title, to finally keep him down. He’s coming back to be Matt’s shadow and take back what belongs to him.

Hardy is defending and an early Reby distraction lets the champ get in a bulldog for two. Tyrus rakes the eyes to slow Kurt down again and Matt grabs a chinlock. Angle fights up and scores with an Angle Slam for two we as take a break. Back with the straps coming down and the ankle lock going on until Matt flips him out to the floor. Tyrus runs Kurt over and goes over to mess with Pope for some reason. Both finishers are countered and it’s right back to the ankle lock until Matt rolls through into a cradle for two.

The Side Effect gets the same, followed by the Angle Slam for two more. It’s time to roll some Germans, drawing the a SUPLEX CITY chant. Matt finally pulls the referee’s shirt over his eyes, allowing a low blow to set up the Twist of Fate for two. More German suplexes allow Angle to go up, only to have Reby offer a distraction. A Twist of Fate (more like a Diamond Cutter) off the ropes allows Matt to retain at 14:00. 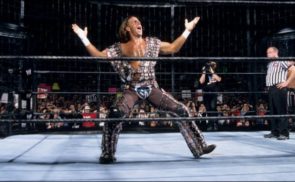 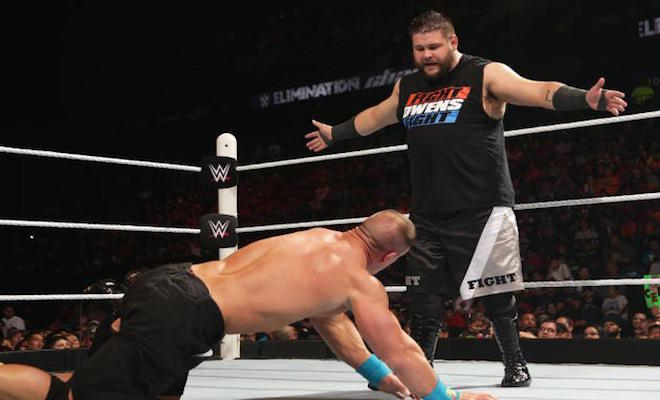