It’s the second Best Of 2019 show and this time around we’re looking at the Madison Square Garden G1 Supercard. I’m not sure why Ring of Honor would want to do that given that it was where everything started to fall apart, but they might as well get whatever tiny bit of credit they can, despite New Japan being responsible for the success. Let’s get to it.

We open with a clip of Kazuchika Okada winning the IWGP Heavyweight Title from Jay White in New York.

From the G1 Supercard.

Title for title. They shake hands before the bell and Cobb wastes no time in shouldering him out to the floor. Ospreay gets in a shot for a breather and runs back in for a Flying Space Tiger Drop, which is pulled out of the air. Whatever Cobb was trying is countered into a tornado DDT on the floor but he’s fine enough for the delayed vertical superplex for two back inside. There’s a hue toss across the ring as the power vs. speed is on full display early on.

We hit the bearhug with Ospreay having to elbow his way to freedom and nailing a spinwheel kick to the face. Pip Pip Cheerio gets two but it’s way too early for Stormbreaker as Cobb reverses into a fall away slam. The Samoan drop into the nip up into the standing moonsault gets two as Cobb gets to show off. Ospreay grabs the ropes to avoid the Tour of the Islands and it’s the Spanish Fly to drop the monster. A missile dropkick to Cobb’s bad shoulder keeps him in trouble but Code Red only gets two.

The Oscutter is broken up and Cobb turns him inside out with a clothesline. In a scary sight, Cobb goes up but misses the frog splash. The Oscutter is countered with Ospreay being thrown into the corner, where he bounces right back to make it connect on a second attempt for two. A hook kick to the head drops Cobb and there’s the Cheeky Nandos kick. Ospreay makes the mistake of trying a super Stormbreaker though because it’s a super Tour of the Islands to crush Ospreay dead. A regular version gives Cobb the pin and both titles at 12:56.

We look at Rush beating Dalton Castle in less than 20 seconds with Ian explaining the whole thing over the video.

Video on the Honor Rumble.

From G1 Supercard to wrap it up.

Lethal is defending in a ladder match and Taven is played to the ring via piano. The ring announcer makes it clear that this ladder match is ONE FALL. Marty goes straight for a ladder so Jay baseball slides it into him. Taven is right there with the no hands dive to take them both down but bangs up his wrist in the process. Lethal goes with some chairs and bridges a ladder between some in the aisle.

That takes too long so Marty jumps him from behind and goes inside to put a pair of ladders in a pair of corners. Lethal and Taven are back in with Jay hitting both of them with ladders to take over. Instead of going up, he bridges a ladder over the bottom rope and of course gets sent face first into it. Marty ties Lethal in the Tree of Woe in the ladder and blasts it with a chair a few times. Lethal is mostly dead so Marty sets up a ladder in the middle, grabs the umbrella, and goes up.

That takes a bit too long though and it’s Taven making the save with a superkick. Taven knees the ladder around Lethal’s neck but it’s Marty going up the ladder. Lethal ties him up in a Figure Four in the ladder but they have to let go so Taven can be stopped. Marty takes a cutter on the apron and Taven powerbombs Lethal onto the bridged ladder in the aisle.

Back in and Marty gives Taven a 619, which further injures his knee. Taven ladders Marty down and the fans are all over him. For some reason Taven climbs a ladder in the corner, earning himself a superplex back down. Lethal comes back in and flips out of the chickenwing attempt. With Marty down, Lethal goes up, punches Taven down, and gets caught in the chickenwing on the ladder.

Taven goes up as well and gets his fingers snapped but Lethal kicks them both off the ladder. A Lethal Combination sends Taven into the ladder and Lethal misses a charge, putting one ladder through another in the corner. Marty drops Taven onto the X between the ladders but walks into the Lethal Injection. Lethal throws the double ladder outside and it nearly knocks out half of the first row. Fans: “THAT’S A LAWSUIT!”

Scurll gives Lethal a brainbuster on the floor and loads up a table as Aldis is suddenly very anti-Lethal. Taven is back up and spears Marty off the apron and through the table. They’re both down so Lethal pulls out another table and the big ladder, setting up Hail to the King for the crazy spot of the match. Lethal and Marty go up but Taven busts out a big purple ladder. They all get knock down as Aldis has to explain to Riccaboni why a taller ladder is a good idea. Taven climbs up, hits Lethal in the head with the title, and wins at 29:38. 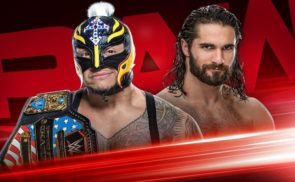