That’s never good. An injury can happen to anyone at any time in wrestling. That is the kind of thing that can cause all kinds of problems in wrestling as you never know how long someone might be out of action. There are some injuries that are a lot worse than others, but in this case someone who wrestles a rather exciting style might be in some trouble for the time being.

One of the bigger stories of this week’s AEW Dynamite saw Jon Moxley running in to save Darby Allin from a two one one beatdown at the hands of Brian Cage and Ricky Starks. This set up a tag team match for next week’s show and it was a heck of an angle to set up the match. However, the beatdown may have been a bit too intense and the match may be in jeopardy due to an injury.

According to Wrestling Observer Radio, Allin may have suffered a concussion at Starks’ hands during the segment. There is no word on how or when the injury took place, or if Allin will miss any ring time. This comes after Allin was injured in the Casino Ladder Match on May 23 at Double Or Nothing and did not wrestle again until the July 21 edition of Dark. It is not clear what AEW will do if Allin cannot wrestle.

It was an intense segment. Check out how the injury may have taken place:

What do you think of Allin? Who should take his place if he cannot wrestle? Let us know in the comments below. 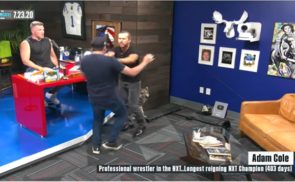