It keeps growing. Wrestlers have to be able to do a lot of things. They have to find some perfect balance between working on their in-ring skills, staying in ring shape and managing to talk well enough to make people care, all at the same time. That isn’t something that is easy to do and sometimes it can be a little easier for someone to focus on just one thing. A former wrestler is doing that in NXT and he seems to be having some success.

Robert Stone has only been on NXT television for a few months now but has already become one of the more entertaining parts of the show. He comes off as more of a goof than anything else, being unable to sign many high level names to the Robert Stone Brand. While he spends most of his time getting hurt in one way or another, Stone has managed to pick up a new signing and it could be a big one.

This week on NXT, Mercedes Martinez officially joined the Robert Stone Brand. The move came after Shotzi Blackheart ran over Stone’s leg with her tank again. Martinez appeared and said she needed someone to handle everything outside the ring and shook Stone’s hand. This marks the second member of the team, along with Aliyah. Stone and company has had issues with Blackheart since she ran over his leg with her tank earlier this month. Martinez recently made her return to NXT after several months away, defeating Santana Garrett in her only in-ring appearance so far.

They have some help. Check out how Martinez joined the team:

Opinion: It comes out of nowhere but this is a good move for the Brand. You can only get so far with Aliyah as the in-ring star of the team as she does not have the best win/loss record. Putting someone as dominant as Martinez out there can open up several new doors and also keeps Stone on television, which is a great thing. This could be something rather entertaining and hopefully that is what we get.

Do you like the move? Who do you see joining the team next? Let us know in the comments below. 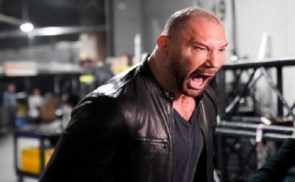