Unless there are some matches that aren’t listed, this is it as far as original episodes go for the time being. It’s a shame too as you could have imagined a match taking place over Wrestlemania weekend or something and then the huge Takeover: Dublin show. As for tonight though, it’s a big battle royal to crown a new #1 contender. Let’s get to it.

The opening video is ALL about the battle royal as everyone wants to win the match and become #1 contender.

Despite Dani’s protests, Piper and Jinny start things off….but Piper tags Dani in anyway. Jinny’s running crossbody doesn’t work but Ray comes in for a cheap shot to put Dani down. Ray pulls Piper off the apron and has to run away, allowing Jinny to knock Dani down for two. Some double teaming in the corner keeps Dani in trouble and Ray’s gordbuster gets two.

Ray forearms her in the chest as we hear a voiceover from Nigel about Wrestlemania being a two night show. Jinny grabs an Octopus Hold but has to let go as Dani powers towards the corner. A few forearms allow the hot tag to Piper and it’s time to run Jinny over. A buckle bomb sets up the Cannonball but Ray breaks up the Vader Bomb. Everything breaks down and Piper gets sent into the steps, leaving Luna to get Gory Bombed for the pin at 7:10.

Next week: the Rise of NXT UK.

Amele works on a wristlock to start but Xia takes her down into a crossbody for two. The armbar keeps Amele down but she’s right back up to work on the arm again. Another armbar works on Xia’s arm this time until a flying mare and jawbreaker get Xia out of trouble. Some running knees in the corner set up the Broken Wings for the pin on Amele at 2:59.

The winner gets a UK Title shot at some point in the future. Ohno backs away from Holland and Mastiff to start and is promptly ganged for the early elimination. Huxley throws out Williams and it’s Webster and Kid throwing each other to the apron for no avail. Coffey gets rid of Webster and Jordan headscissors Huxley out. Kid is thrown onto Huxley’s back but chokes him out and climbs back in for a clever save.

T-Bone is out next and Coffey seems to be favoring his leg. A chokebomb plants Banks and Mastiff gets rid of him, meaning it’s time for everyone to fight near the ropes. Mastiff gets rid of Jordan (Nigel: “Jordan with a mere ten minutes in the match!”), followed by Holland powering out Carter (with a huge overhead belly to belly) and Smith back to back. Ligero is thrown onto the two of them, leaving Mastiff vs. Holland. Dar interrupts the showdown but here’s Joseph Conners to distract Holland so Coffey and Dragunov can get rid of him as well.

Coffey and Dragunov have the big slugout for a double knockdown, leaving Moustache Mountain to hit stereo airplane spins on Dar and Kid. Seven drops Bate but Coffey tosses Seven from behind. Bate manages to get Mastiff on his shoulders but can’t keep him up so it’s time for everyone to pair off. Kid hits a springboard clothesline on Coffey but gets headbutted out by Devlin. A Rock Bottom puts Dragunov onto Coffey and Devlin moonsaults onto both of them, only to have Dar throw Devlin out.

Mastiff is waiting on Dar though and it’s a big backsplash to crush him hard. Everyone gets together to get rid of Mastiff though and we’re down to Coffey, Dar, Bate, Dragunov and Wolfe. Bate gets rid of Dar (the fans sound VERY pleased) and everyone takes a corner. Coffey swings Dragunov for a long time before crushing Bate in the corner. A running tackle crushes Bate and Dragunov at the same time but Wolfe sends him to the apron. Wolfe kicks Coffey out and we’re down to three.

Bate and Dragunov double team Wolfe but some heel miscommunication lets him take them both down, including a heck of a German suplex to drop Bate on his head. Bate staggers Wolfe though and Dragunov clotheslines him out, leaving Bate vs. Dragunov. They tease some eliminations until Bop and Bang drops Dragunov in a heap. A suplex plants Dragunov again but Bate walks into a hard clothesline.

The 6 1 Line plants Bate again and they’re both down for a bit. Bate unloads with rights and lefts until an enziguri takes him down again. They both go over the top and out to the apron so Bate loads up a rather illogical superplex. Dragunov throws him back in and hits a top rope backsplash but can’t hit Torpedo Moscow. Bate gets sent over the top but holds on with one hand, allowing Dragunov to hit Torpedo Moscow for the win at 28:40.

It was a heck of a main event: 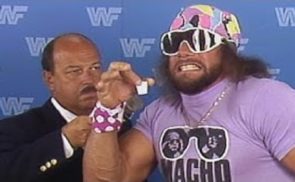 WWE Has Their Own Mastercards (With Pictures And Everything!)