I’m not sure what the deal is with this one as the show has a fancy title but it seems to just be a beefed up episode of the show. What matters most here is that Walter is defending the United Kingdom Title against Rampage Brown, which should be a heck of a hoss fight. This show does have some potential so let’s get to it.

The opening video talks about how this is Wrestlemania weekend but you need a big way to start. That is where this show comes in, including a pretty big United Kingdom Title match.

Heritage Cup rules and the winner gets a shot at A-Kid. Trent Seven is here with Bate while Sha Samuels is with Dar. Before the match, A-Kid pops up on screen to say he’ll be watching. Round One starts with an exchange of missed strikes so Bate tries a backslide, only to be driven into the corner. The second attempt at a backslide works a bit better for a near fall, only to have Bate grab a rollup for the first fall at 1:15.

Round Two begins with Bate taking him down by the arm but Dar reverses into a leglock. A takedown by the leg hate Bate in a bit of trouble but he pops back up to grab a cravate. Dar takes him down again and an elbow to the head gets two but Bate is back up with a dropkick. They fight over a test of strength and the round ends.

Round Three begins with Dar hitting a shot to the face for a surprise knockdown. Bate has to shake his head on his way back up and then it’s an even harder shot to put him down again. That’s good for two and Dar seems to get a bit cocky but comes back to reality to kick Bate in the knee. Seven is seeming a bit nervous as Dar grabs a belly to back suplex for two. Bate gets in a shot in the corner though and a middle rope elbow connects, only to damage the knee a bit more. The airplane spin goes on, with Bate turning him around and around for nearly thirty seconds until the round ends.

Round Four begins with Dar rather dizzy so Bate picks him up with the airplane spin all over again. Bate finally drops him but can barely stand himself. He’s fine enough to hit the rebound lariat but Dar is right back with a sliding lariat for his own two. Bate manages to use his legs to tie up the arm though, setting up a hard shot to Dar’s face. Back up and they trade the big strikes, including Dar kicking the knee out. Bate smacks him in the face and the round ends with both of them in pain.

Round Five begins with Dar going straight to the knee. Bate misses a shot and gets taken down, setting up a kneebar for the tap at 40 seconds (13:18 overall) of the round to tie it up at a fall apiece. Round Six (the final round) begins with Dar going after the knee again but this time Bate manages to try the Tyler Driver 97. That is broken up but the seconds get in a fight on the floor. Somehow Bate manages a dive onto all of them for a huge knockdown. Back in and the Nova Roller misses, allowing Bate to hit the Tyler Driver 97 for the pin at 1:34 of the fall (15:33 overall).

Flash Morgan Webster and Mark Andrews are training in the Performance Center with I believe Dani Luna.

Video on Ilja Dragunov going a bit nuts after his loss to Walter, including him snapping on Sam Gradwell.

Jordan Devlin is on his way back after he’s done in Orlando.

Dawn headlocks McKenzie to the mat to start but McKenzie reverses into a cradle for two. That’s too much for Dawn so it’s off to Satomura vs. Kay instead. Ray manages to get her down in the corner and unloads with kicks, allowing Dawn to come in for the same. Satomura gets back up and drives over to the corner, allowing McKenzie to come in for a double kick to Dawn.

McKenzie grabs a suplex and then spears Ray down for two but Dawn pulls Satomura off the apron, meaning no tag. Instead, Dawn snaps off a Saito suplex for two. McKenzie gets in a few forearms of her own though and the hot tag brings in Satomura to start striking away. Ray gets kicked down in a hurry, setting up Satomura’s own Saito suplex for two.

Back up and Ray grabs a Gory Bomb for two, with McKenzie making the save. Ray superkicks McKenzie outside but Satomura pulls her into the STF. The rope breaks gets Ray out of trouble so she suplexes Satomura down. The two of them fight to the floor, leaving McKenzie to small package Dawn for the pin at 9:03, with the threat of Satomura preventing Ray from making a save.

Post match Aoife Valkyrie comes out, stares at Satomura and McKenzie, and pulls out a feather to leave for Satomura.

A-Kid is looking forward to defending against Tyler Bate so he can prove that he is the best technical wrestler around.

Amir Jordan storms into the building, screaming for Kenny Williams. Sid Scala says Kenny isn’t here but they can face each other next week. That seems good enough for Jordan.

Kenny Williams is sick of Jordan and is ready to prove that he carried him for two years.

Video on Walter vs. Rampage Brown.

Walter is defending and drives him into the corner to start. Brown blasts him with a shot to knock him down though and a big shoulder puts Walter on the floor for a change. The fight heads outside where Walter drops him onto the apron and takes it back inside to tie Brown in the ropes. That means the big forearms to knock Brown free, setting up the big boot to rock him again. The chops put Brown down and a kick to the back makes it even worse.

Walter slaps on the Boston crab but Brown powers his way out for a breather. They strike it out until Walter knocks him down with a chop for two. We hit the chinlock for a bit but Brown is back up again, this time managing to knock Walter down for a change. They trade clotheslines but Walter gets the sleeper on to put him in trouble again. Brown breaks it up again and slips out of a powerbomb, setting up a heck of a clothesline. The Doctor Bomb is blocked and Walter gets the sleeper but Brown slips out again.

Walter blasts him down though and now the powerbomb can connect for two. With nothing else working, Walter goes up top but Brown powerslams him right back down. Brown gets a very delayed cover and nails a clothesline, setting up the Doctor Bomb. Walter is smart enough to roll to the ropes though and the delay means no cover. Instead Brown clubs him in the face but can’t hit another Doctor Bomb.

The chop takes Brown to his knees and a knee to the chest takes him down again. The big clothesline barely keeps Brown down and a second only gets two. Brown breaks up the sleeper so Walter suplexes him into the powerbomb for two more. Walter is done with this and the top rope splash retains at 13:44. 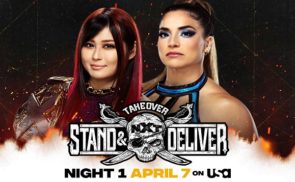 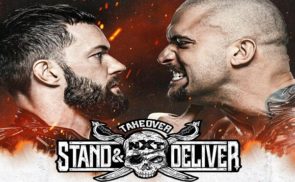