We’re done with the 19th Anniversary Show, which I’ll get to at some point in the future. What matters here is that we had some big moments at the pay per view, though those will not be present here. I’m not sure what to expect here, but it is likely to be a stand alone episode anyway. Let’s get to it.

Quinn McKay welcomes us to the show and runs down the card, which includes a Pure Rules gauntlet.

Beer City Bruiser says he is tired of being the fun loving drunk and not winning.

Mike Bennett talks about how an angel on his shoulder saved his life but sometimes that angel falls asleep. Tonight won’t be a random act of violence because tonight is going to be a calculated assault.

Matt Taven is on commentary and Bruiser starts fast by knocking Bennett up against the barricade. They get inside for the first time with Taven hammering away but getting knocked down in a hurry. We take a break and come back with Bennett kicking him in the ribs and hitting a running forearm to the back of the head.

Bruiser is right back with a shot to the leg, which he then wraps around the rope. Bennett hits a few forearms into a Side Effect for a breather. Another running forearm puts Bruiser down for two but he’s right back with a shot of his own. Bruiser goes to grab the beer bottle and the referee calls the DQ before he can do anything else at 10:38.

Result: Mike Bennett b. Beer City Bruiser via DQ when Bruiser picked up a beer bottle (10:38)

Post match the beatdown seems imminent but Taven makes the save.

There are six entrants and each fall has a fifteen minute time limit. Another important rule is rope breaks carry over to the next fall so you don’t get them reset when someone new comes in. Dante Caballero is in at #1 and Will Ferrara is in at #2. They go to the mat to start with Ferrara getting the better of things off a front facelock. That’s broken up and Ferrara wristlocks him down onto his head for a nasty crash.

Ferrara starts in on the arm before switching into a cobra clutch. Caballero breaks that up with a right hand but the arm is too banged up for a piledriver. Instead Ferrara starts working on the short armscissors, with Caballero not being able to flip out. A crucifix gives Ferrara two so he grabs a jackknife rollup to get rid of Caballero at 5:57.

World Famous CB is in at #3 and we take a break before the fall starts. They shake hands and get things going with an exchange of wrist grabs, which sends both of them to the mat. Ferrara gets the better of a wristlock with CB not being able to roll his way to freedom. CB finally rolls over into a double arm crank to slow things down but Ferrara rolls over into a cobra clutch stretch. That sends CB to the ropes for his first break but he’s right back up with a rollup to pin Ferrara at 4:14.

Eric Martin, one of Ferrara’s students, is in at #4. An early headscissors doesn’t work for CB but neither can hit a shot to the face. Instead Martin takes him down and drops some elbows but CB gets to the ropes to avoid a Boston crab. A belly to back suplex into a knee drop gets two on CB, followed by a hard clothesline for the same.

CB gets smart with a dragon screw legwhip out of the corner. A low superkick gives CB two but Martin pulls him out of the air. That means a northern lights suplex into the Boston crab, meaning CB has to use his third rope break. This time CB pulls him down into a double arm trap (using his legs) and wraps Martin up to crank on the arms for the tap at 6:03.

Martin staggers out and it’s Wheeler Yuta in at #5. CB trained Yuta so he starts fast with some rollups for two each. Yuta is ready for an armdrag attempt though and a backsplash gets two on CB. A Gory Stretch has CB in even more trouble for a bit but he escapes into a pinfall reversal sequence for a lot of twos each. Yuta knocks him down though and gets up top for a super DDT and the pin at 3:09.

Fred Yehi is in at #6 to complete the field. Yuta wastes no time in hitting a dropkick so Yehi knocks him down and kicks away. The armbar has Yuta in some trouble and it’s time to crank away. That’s broken up so Yuta can hit an enziguri into an atomic drop into a springboard crossbody for two. Yehi rolls through a high crossbody for two of his own and it’s time to work on the leg. The hold doesn’t last long as Yuta gets out and dropkicks the knee, plus the side of the head.

You don’t do that to Yehi, who rides him on the mat and grabs a Koji Clutch. Yuta escapes by cranking on the leg so Yehi switches into a choke. That’s broken up with a rollup for two and Yuta’s kneebar makes Yehi use a rope break. Yehi grabs a Kofi Clutch so Yuta cranks on the leg, only to have Yehi switch sides to use the good leg and make Yuta tap at 6:24 (25:51 total, not counting time between falls and commercials). 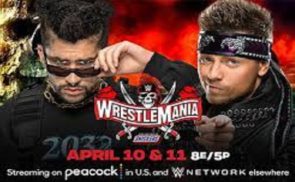