This is a different kind of Takeover as the whole thing is spread over two nights. That has caused a few issues with the build to the show as it is a little bit difficult to focus on two shows at once. Throw in the fact that this means we have twice as many matches as usual for a Takeover and I’m not sure how something like this is going to go. Then again, you don’t bet against Takeover so let’s get to it.

Stark continues to be one of the more interesting cases in NXT at the moment as it is clear that they see something in her (because it’s there) but she keeps losing to one big name after another. At some point that is going to stop working out for her and the stock is going to drop, meaning she needs to win something. I’m just not sure if she is going to get that win here.

This is for the vacant titles thanks to Oney Lorcan and Danny Burch being injured. We’re starting off with a confusing one here too as I have no idea who is winning the titles. You really could go with all three as possible winners and that is a great thing to see. MSK would seem to be the likely winners here as they were guaranteed a title shot thanks to winning the Dusty Classic….but things have changed since then.

As much as I want to pick Legado as the team who could pick up the titles because the other two seem like the likely winners, I’ll go with MSK winning the titles here for a nice feel good moment. I’m not sure if that is the best idea though as the Veterans need to win something after coming up short time after time, but MSK seems popular enough that a win would be a nice energy boost to the show.

This is something similar to a Royal Rumble, but you are eliminated by pinfall or submission and the winner gets a North American Title shot against Johnny Gargano on night two. In theory that eliminates the heels from getting their shot, but stranger things have happened around here. I would assume that we only have three potential contenders, and only two of them are interesting.

Unfortunately I think we’re getting Lumis here, as he has been tied up with Gargano and the Way for a few weeks now. Reed is the most interesting choice and Ruff has a history with Gargano, but Lumis makes the most sense here. Grimes is on a roll and could feud with a few people in the match. Scott is already feuding with Ruff and Knight….well I’m not sure you can call his stuff with Reed a feud just yet. Lumis goes over here and moves on to the title shot on night two.

Yes please. I think I might need a bit more than that, but this one feels like possibly the most intriguing match on the entire card. Kushida is someone who is capable of busting out a great match at the drop of a hat and Dunne is Dunne, so how can this one be bad? These two have been having issues for weeks now and that sounds like a good enough reason for the two of them to spend fifteen minutes trying to break the other’s arm off.

While Kushida needs a win to get some footing underneath him, Dunne is a far bigger star and is going to win here. He is someone who could become a top star around here in the blink of an eye and it makes sense to have him go over here. This very well could steal the show and the entire Takeover, but it is more about getting us to the inevitable, which is Dunne getting the win.

Speaking of matches that could steal all of Takeover, we have these two who are more than capable of doing just that. This time around it is for Walter’s title, as his seemingly never ending reign continues. Now the problem with this one is they have announced Walter’s next title defense, but that isn’t exactly the point here. What matters is Walter is back in the ring and that is a great thing for everyone.

Of course Walter wins here, because they aren’t going to end the epic title reign on a different continent in a match that feels a bit thrown together. Walter is someone who can have a classic with anyone he faces and if we get the old Ciampa here, these two could do something incredible. I know Ciampa isn’t as great as he has been before, but even a mostly there Ciampa is a sight to behold.

This is an interesting one as the champ issued the challenge for a change. You might not realize it but Shirai has been champion for about ten months now and has all but cleared out the division. Thankfully NXT is good at bringing in fresh talent and that is exactly what they are doing with people like Gonzalez (among others). This was the main focal point of last week’s NXT and it feels like a main event.

I’ve been betting that Shirai will lose the title for the better part of ever now and I’ll do that again here, as there just aren’t many people left to take it from here (save for maybe Xia Li, but I’m not sure how much someone with her current gimmick needs the title). They need to pull the trigger on someone eventually (though Shirai is doing fine in this role) and Gonzalez makes more sense than probably anyone else. Gonzalez wins here and ends a sneakily epic reign from Shirai.

These titles are still brand new and one of the best ways to make them mean something is to have them on the line. Granted there still are not very many established teams to go after them, but at least the Way has a name. Blackheart and Moon don’t feel like long term champs, but losing in one of your first defenses seems like a quick drop (pun intended), even at a show like this.

Now the question is will they drop them here and I’ll go with not yet. I think the Way does get the belts eventually, but it isn’t happening so soon. It is just a little too early for the titles to change hands twice and NXT would be smart to have the titles sink in with Blackheart and Moon for a bit. The Way isn’t a team that needs to have multiple titles, so hopefully the titles don’t change here, because they really don’t need to yet.

This is a follow up from the previous night as the winner of the Gauntlet Eliminator (Lumis, assuming my completely accurate picks are right) gets a shot at Gargano. I’m not sure how much I like this idea as it can make for a hard match to set up in advance, but at least they have something going here between Gargano and Lumis. That sets up a rather scary possibility of even more of a focus on Lumis, though they have pulled back a bit in recent weeks.

I think I’ll go with Lumis winning here, as it has been teased long enough that it probably needs to just happen already. Gargano is fine in his role as champion, but it feels like he has held the title for the better part of ever at the moment. The title probably needs some fresh blood and while Lumis isn’t the most exciting or interesting blood, he certainly would be fresh. Now just get it over with already.

It’s a special situation as both are champions, meaning there are two titles. Since Shawn Michaels is helping to run NXT and it has been at least a month since the last one, it is time to put the belts above the ring and have a ladder match. That makes things both a little more interesting and less interesting at the same time, as I wasn’t sure who was going to actually take the fall here. Throw in the ladder though and things are a little bit different. Someone has to stick around though and I think I know what that means.

I’ll go with Escobar to win here, as not being able to pull down a title from above the ring is not going to crush his momentum. Devlin still seems to be the guy who is going to go after Walter (and likely take the title from him) so getting him away from the Cruiserweight Title is a necessary step. I’m also not sure I can imagine him sticking around in America and NXT UK doesn’t need a Cruiserweight Title so let Escobar have it for good.

This is unsanctioned and I believe the words “oh boy” are appropriate. These two have some great chemistry together and it should be awesome to see them beat the living fire out of each other. I know the working theory is that it should be time to see Cole go to the main roster and while I’m not sure I believe that is the case, getting beaten by O’Reilly in a big blowoff feud would be a great way to go.

So yeah give me O’Reilly here, mainly for the reason that Cole absolutely does not need to win this match. O’Reilly has yet to have the big singles win and Cole has won everything he needs to win in all of NXT. I wouldn’t mind seeing Cole show up on the main roster as a post WrestleMania surprise, but I’m hoping that we see him go down to O’Reilly after one heck of a fight.

We’ll wrap it up with another match that could go either way. In theory the loser here should be on their way to the main roster, as Balor has already been a main roster star and Kross was pretty much ready for the main roster the day he debuted. I don’t know how well the gimmick would work there, but at least it would make sense to have Kross and Scarlett up there. Someone has to lose though and that makes it hard to figure out.

I actually think I’ll take Balor to win here, as NXT is going to want to keep some star power down there because the show moving over to another night. Hopefully the match is the hard hitting struggle that it should be, but I have no idea who goes after the title once Balor retains. Granted he probably doesn’t win here because it is a complete coin flip, but yeah we’ll go with Balor here.

I’m not completely sold on the idea here as it feels like a pair of shows put together rather than one great Takeover. That could mean a bit of a downgrade, but if there is one thing that I have learned about Takeover over the years, it is that NXT knows how to figure out a way around anything. There is enough good stuff on the card to believe that they could pull it off and hopefully that is the case here. 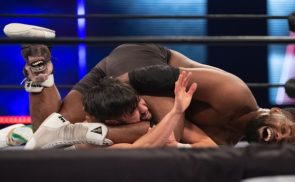