The top story heading into Takeover has been a hoss fight between Keith Lee and Karrion Kross. While Lee is the new NXT Champion, Kross is the new NXT monster and there is nothing to suggest that either is going to be slowing down. That makes for quite the build and it was made even better when Kross choked out Lee’s friend Dominick Dijakovic. The end result was fairly clear, and now it has been set…on fire.

This could be a showdown. Check out both monsters doing what they do best:

Opinion: Works for me. The setup for this match was straight out of Rocky IV as Lee saw his friend get destroyed by the monster and now it’s time to fight for both vengeance and the title. Ok so the title wasn’t on the line in Rocky IV but I think you get the idea. They have set this up well and now if they make it work as well as it could at Takeover, everything will be fine.

What do you expect from the match? Who leaves as champion? Let us know in the comments below. 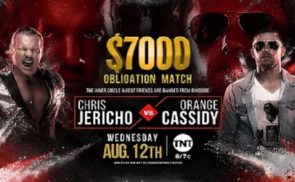