We’re coming up on Revolution and that means there are a few things we need do first. That would include a tag team battle royal to crown some new #1 contenders, plus Cody vs. Wardlow in a cage so Cody can face Maxwell Jacob Friedman. Hopefully we get some other good stuff as well and the last few weeks would suggest we will. Let’s get to it.

Both members have to be eliminated. Kazarian dives onto everyone to start and Evans does the same, but his dive is caught for an elimination. Private Party saves themselves with the Silly String and then gets rid of T Hawk. SCU beats up the Butcher and Angelico but the Dark Order jumps them. The Dark Order isn’t that good though and get taken down. Hold on though as we need a Dark Order promo from the crowd about how the Exalted One is near.

The distraction lets the Dark Order get rid of SCU, only to have the Bucks superkick the Dark Order out. SCU goes after the rest of the Dark Order in the crowd, leaving Trent and Cima to chop it out in the ring. An Iconoclasm plants Trent and now Santana/Ortiz get in for the first time. Jungle Boy and Cima head to the apron for the slugout with Luchasaurus getting rid of Cima. The Bunny distracts Jurassic Express though and Butcher and Blade jump them from behind.

As this is going on, the Dark Order offers Cima a mask and he seems interested. Nick Jackson gets to beat up just about everyone else in the match until Butcher manages to send him over the top. A backdrop puts Jungle Boy on a pile of people, leaving us with Luchasaurus vs. Butcher. Private Party loads up Silly String again but they’re both knocked out as a result.

Luchasaurus kicks Angelico out but here’s Sammy Guevara to help eliminate Boy. Butcher and Blade and Santana/Ortiz get rid of Luchasaurus and it’s the Best Friends standing tall. Butcher and Blade get rid of Chuck and throw Trent over, but he lands on a surprise Orange Cassidy’s shoulders for the save. That lets Chuck get back in, leaving us with Matt, Blade, Santana/Ortiz and Chuck.

Butcher and Chuck fight on the apron as Orange is ready for the save if necessary. He puts his hands in his pockets but Bunny kicks him low as Chuck is eliminated. A spear through the ropes gets rid of Butcher, leaving Matt against Santana/Ortiz. The Street Sweeper plants Matt but he hangs on and superkicks Ortiz out. Sammy Guevara tries to interfere and gets superkicked out of the air, leaving Matt to clothesline Santana out for the win at 18:00.

Britt Baker is on commentary and has a special coffee for Tony. JR wants someone to explain Stadtlander to her and only Excalibur is dumb enough to go into the backstory, with JR calling him off in a hurry. Stadtlander cartwheels around a lot and then crawls towards Shanna in the corner, setting up the nose touch.

That sets up a poke/shove off as JR is rather annoyed that it’s always piefacing. JR: “I like cake!” A knee to the ribs cuts Stadtlander off and we take a break. Back with Shanna crotching her on top and tying Stadtlander in the Tree of Woe. A spinning DDT gets two but Stadtlander is right back with the Big Bang Theory for the pin at 8:07.

Here’s Nyla Rose for a chat. She doesn’t like the fans buzzing around her because she wants to be the face of the division, meaning making the most money too. Riho believed in herself and look where it got her. No one can stand up to her so here’s Kris Stadtlander to point at the belt. Big Swole comes out as well to pose at Nyla, drawing out referees to break it up.

Tazz is on commentary but hold on though as here are Chris Jericho, Sammy Guevara and Jake Hager to sit in the front row. Moxley has the bad eye and bad ribs so Cobb starts fast with the belly to belly into a dropkick. They head to the floor with Moxley getting in some chops but Cobb runs him over without much trouble. A headbutt to the ribs connects back inside and it’s a chinlock with a knee in Moxley’s back.

Moxley gets knocked outside again and we take a break. Back with Cobb planting Moxley again but pulling him up at two. Moxley’s sleeper is broken up in a hurry so he goes with a heel hook, which is broken up as well. Cobb goes to the floor so Moxley dives off the top….and right into another suplex. An Oklahoma Stampede gives Cobb two but Moxley hits a middle rope knee.

That earns him a German suplex but Moxley pops up with a clothesline. Cobb shrugs off another clothesline and blasts Moxley with one of his own. Tour of the Islands and the Paradigm Shift are blocked and Moxley elbows him in the corner. A superplex plants Moxley again, but he interlocks the legs for the small package and the pin on Cobb at 11:35.

Post match the Inner Circle comes in for the beatdown but Dustin Rhodes runs in for a failed save. Instead here’s the returning Darby Allin, who comes to the stage, walks around a bit, loads up his skateboard, and then comes to the ring, all while the Inner Circle stands there and watches him. The good guys clean house with Allin beating people up with the skateboard. Moxley gets in the big showdown with Jericho to finally clear the ring.

Page and Omega are defending and Page’s name graphic says “como se dice Yeehaw? (How do you say Yeehaw?). Page slugs it out with Fenix to start before it’s quickly off to Omega for the running Fameasser. Pentagon gets knocked off the apron and it’s Youn Can’t Escape to Fenix, with Page taking out Pentagon again so Omega can get two. Everything breaks down with the Bros taking over, allowing Excalibur to wonder how long the ten seconds with no tag can go. A running kick to the face rocks Omega in the corner and we take a break.

Back with Page cleaning house, including a dive to the floor to take out Fenix. Pentagon is back in with a Canadian Destroyer to Omega though and everyone is down. It’s Fenix up first with the kicks to the head but Pengaton is knocked off the apron. That means the big dive from Page, followed by the moonsault to the floor.

Back in and everything stays broken down, including Page’s Buckshot Lariat hitting Omega. The Pentagon Driver gets two on Omega in a good near fall but he’s right back up to send Pentagon outside. A Tiger Driver 98 plants Fenix and it’s the V Trigger/Buckshot Lariat combination to retain the titles at 15:07.

Video on Cody vs. MJF, who is making Cody face Wardlow in a cage tonight.

In a cage (which is a good bit taller than the WWE version) and escape means nothing. MJF is here with Wardlow, who is making his in-ring debut. Cody kicks him in the head to no avail to start and Wardlow throws him into the corner. Wardlow blasts him with a clothesline to turn Cody inside out and there’s a toss into the cage. Back from a break with Cody busted open and making the comeback, until Wardlow kicks him low.

A release F5 drops Cody again and Wardlow throws him through the door. MJF tells Anderson to slam the door on Cody’s head but Arn hits MJF with it instead. Cody scores with some clotheslines and sends Wardlow into the cage. Wardlow is back with his own whip into the cage, setting up a heck of a Swanton for two.

The ring is thrown inside but Cody kicks him low and takes it away. MJF tries to claim in but Brandi hits him with a chair. Arn sends MJF into the crowd before he can hit Brandi, leaving Cody to hit Cross Rhodes for two. With nothing else working, Cody goes all the way to the top for a moonsault press to finally finish Wardlow at 11:07.

Post match Cody poses on top of the cage and MJF panics to end the show. 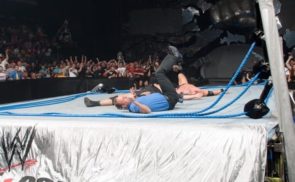 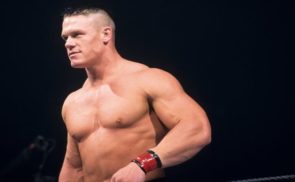