Welcome to the show. WWE is in a unique place with its roster as not only does it have the main show, but also a large group of talent down in NXT. While NXT operates as its own promotion, it also serves as the official WWE developmental system. Therefore, some of its wrestlers are ready to fill in at a moment’s notice and that took place this week on SmackDown with a pair of stars.

This week’s SmackDown featured a first round match in the WWE Women’s Tag Team Title tournament. The match was originally planned to feature Natalya and Shayna Baszler facing NXT’s Nikkita Lyons and Zoey Stark. However, Stark was announced as having been injured so Gigi Dolin and Jacy Jayne of NXT’s Toxic Attraction were placed into the match instead. Jayne and Dolin went on to win the match and will face Aliyah/Raquel Gonzalez in the second round next week on SmackDown. There is nothing to suggest that this will be a full time main roster call up for the team.

Opinion: I’m glad to see Toxic Attraction on the show, but it does make me wonder why they weren’t in the tournament in the first place. They are one of the most successful women’s teams in NXT history and it would make sense to have them in the tournament with the main roster teams. At least they are there now though and they might even be dark horse candidates to win the whole thing.

What do you think of the debut? Who will win the titles? Let us know in the comments below. 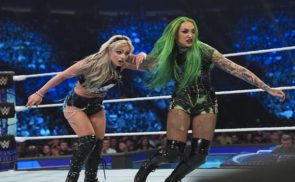