Someone has to go. The biggest WWE story of the week saw the announcement that NXT UK will be going on hiatus next month, with the brand being replaced by the larger NXT Europe next year. That is the kind of thing that you do not see very often but it means that other changes have to come along with it. Now we are seeing some of those changes taking place.

Shortly after the announcement of NXT Europe, several NXT UK stars have announced that they are leaving the promotion. Some of the names who have announced their departures are Rohan Raja, Sha Samuels, Nina Samuels, Dani Luna, Primate, Flash Morgan Webster, Dave Mastiff, Mark Andrews, Ashton Smith, Jack Starz, Emilia McKenzie, Wild Boar and Amale. It is not clear if any more names will be or have already been let go. NXT UK wrestlers who have not been released are expected to be moved over the NXT in the coming weeks.

Very thankful to @WWE for allowing me to entertain thousands every week. This is just a road bump for me and I solely believe that. I have a chip to prove and I'm going to do everything I can so I can get back to where I belong. I'll be back! ?? pic.twitter.com/mGpPXup97G

I’m now REALLY skint. Thanks for the laughs and it was a joy.

In a couple months you'll be sick of me already.

Hope you all enjoyed #TheNinaSamuelsShow, I've recorded some gems for you to enjoy over the next few weeks so tune in tonight to #NXTUK

Then, there's a big wide world out there that #NeedsMoreNina ? pic.twitter.com/yhHLknUnQk

After six great years with WWE, my time with the company has now come to an end.

Excited to see what’s next https://t.co/wXSMm6sLso

As of today I am no longer under contract with WWE. It’s been a wild experience and I’m thankful for everything it’s afforded me – I am excited for what’s next and I am BUZZING to get back in that ring and GO!

Until we meet again. ? pic.twitter.com/j55qqcjMnS

Thanks for the memories ?@WWE? pic.twitter.com/I07V294BaV

Opinion: You had to know this was coming but my goodness that is a lot of people to let go in a single day. That being said, a lot of these people never really took off in NXT UK and I’m not sure what the point would have been in keeping them. At the same time though, it is more than a bit sad to see them go after all of the hard work that they put in to make their time in NXT UK work.

What do you think of the releases? Who else might be let go? Let us know in the comments below. 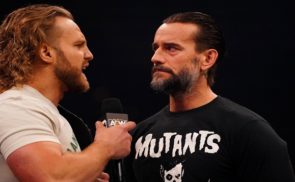