We’re north of the border for the 1,200th episode and odds are that is not going to be the biggest deal. We are only a few weeks away from Clash At The Castle and now we should be in for some build to the show. There is a lot that needs to be done for the card and maybe we can get some of that done tonight. Let’s get to it.

Commentary talks about the 1,200th show, with McAfee name dropping Jim Cornette doing commentary on the first show (or at least the pilot).

Ronda Rousey walks in front of commentary and gets in the ring where she says her fine is paid so Adam Pearce needs to get out here and lift her suspension. Cue Pearce, with security to say that’s above his pay grade, so he asks her to leave peacefully. Pearce says that’s what she did last week and now it’s time to get violent. Security gets in the ring and gets beaten up. That’s too far for Pearce, who has the police come out and arrest Rousey. As she is taken to the back, she asks if this is on Pearce’s pay grade as she is put in the car.

The police car pulls away and Roman Reigns arrives.

Zoey Stark is hurt so Toxic Attraction (Gigi Dolin/Jacy Jayne) from NXT is taking her and Nikkita Lyons’ place. As a bonus, Bayley/Iyo Sky/Dakota Kai sit in the front row to yell at commentary. Natalya rolls Dolin up to start and it’s off to Deville for a spear of all things and a near fall. Jayne comes in and misses a charge into the post, allowing Jayne to hit a running flip dive to the floor.

We take a break and come back with Jayne loading up a Sharpshooter but getting knocked away by Deville. It’s back to Natalya, whose Sharpshooter is broken up as well. Deville is sent into the barricade in front of Bayley and company for some yelling as Jayne tags herself in. Natalya doesn’t notice and puts Dolin in the Sharpshooter, allowing Jayne to grab a rollup for the pin at 9:59.

Sami Zayn (hometown boy) goes in to see Roman Reigns, who asks how things have been going. Zayn talks about his recent issues with the Usos, especially Jey, who has been telling him to LEVEL UP. We hear about how Zayn took a Claymore for him last week and calls Jey ungrateful. Sami knows he went too far….until Reigns agrees with him. Reigns gets up and his phone rings, with Jey on the other end.

Reigns tells Sami to answer it, which doesn’t seem to go well with Jey. Sami says he’ll take care of it before hanging up. Apparently Jey was yelling about trouble at the border so the Usos won’t be here tonight. That has Reigns looking nervous, but Sami offers his services. He does have a #1 contenders match for the Intercontinental Title tonight and Reigns thinks that title would look good in the Bloodline.  Sami goes to warm up but Reigns asks about Kevin Owens. Sami says they’re still tight so Reigns says to tell Owens that Reigns doesn’t owe anyone anything. As Sami leaves, Reigns glares a bit.

We look back at Gunther retaining the Intercontinental Title over Shinsuke Nakamura last week. Max doesn’t like the interruption so Hit Row clears the ring quickly. Rapping ensues and goes on for a while.

Karrion Kross and Scarlett talk about what Drew McIntyre said about him on Raw. He still has his eye on Roman Reigns too. McIntyre and Reigns are his chosen ones.

Ricochet vs. Sheamus vs. Madcap Moss vs. Happy Corbin vs. Sami Zayn

For the Intercontinental Title shot at Clash At The Castle. The fans are WAY behind Sami with the OLE chants. The ring is cleared out to start, leaving Ricochet to hurricanrana Zayn. Corbin (in a t-shirt, jeans and tennis shoes, likely for reasons of a lost bag) cuts off a dive with a chokeslam to Ricochet and we take a break. Back with everyone brawling on the floor until Corbin takes Ricochet back inside.

Corbin hits the slide under the ropes clothesline on Moss and then knocks Zayn off the apron (Cole: “Sami looked like El Generico there.” McAfee: “Oui.”). Ricochet is back up with a springboard crossbody to Corbin and a springboard dropkick to knock Zayn off the apron as well. A running shooting star press gets two on Corbin as we see a NASTY bruise/cut on Sheamus’ thigh. Sheamus’ leg is good enough to hit Irish Curses on Moss and Zayn, though he does come up limping.

The ten forearms to the chest have Moss and Corbin in more trouble, followed by seventeen forearms to Ricochet’s chest. Zayn jawbreaks his way to freedom though and low bridges Corbin out to the floor. The big flip dive drops Sheamus and Corbin on the floor as we get some old school Sami for a change. Back in and a Michinoku Driver drops Ricochet and the Blue Thunder Bomb gets two on Moss.

Sheamus is back up to take out Ricochet though and a super White Noise sends Zayn outside, holding his arm. Moss gets in his own run but Ricochet cuts him off as Sami is helped to the back. Corbin Deep Sixes Sheamus and Ricochet clotheslines Moss, leaving everyone down as we take a break.

Back with Corbin pounding on Ricochet and dropping him with a torture rack neckbreaker. Corbin and Sheamus slug it out until Corbin gets clotheslined to the floor. A jumping knee gives Sheamus two on Moss but the Brogue Kick is countered into something like a Boss Man Slam. Ricochet Recoils Moss to the floor and hits a shooting star press for two on Sheamus, with Corbin making the save. Cue Sami for quite the reaction and a t-bone suplex on Ricochet. The Helluva Kick hits Ricochet but Corbin pulls Zayn out. Sheamus is back in with the Brogue Kick to finish Corbin out of nowhere at 22:22.

Video on the Viking Raiders. They have torches and face paint because a great battle awaits. Then they burn a bunch of New Day stuff.

Morgan’s arm is out of the brace and into just tape but she isn’t worried about Baszler. She can’t start playing it safe now because she needs to get in the ring.

Non-title. Before the match, Shotzi talks about how Morgan is getting too emotional and calls this match a bad decision. Liv slugs away to start and staggers Shotzi a bit, only to get knocked back with a shot to the face. Shotzi knocks her outside and we take a break. Back with Liv fighting out of trouble, setting up a brawl from their knees. Morgan hits a quick Codebreaker and Oblivion for the pin at 6:02.

Post match Shayna Baszler comes in and knees her down before teasing the stomp on the arm but stomping and kicking Morgan down instead.

Ronda Rousey has been released on her own recognizance and Adam Pearce won’t be pressing charges.

Here is Roman Reigns (alone), who takes his sweet time getting into the ring. After being handed the microphone, Reigns talks about how he isn’t here every week, meaning every once in awhile, people are going to come out here and say something stupid. If anyone ever comes out here and says they’re the face of this company or the main event and it isn’t him, they’re LYING. The same thing is true if someone says they carry this company, including Drew McIntyre, who is beneath him.

Cue McIntyre to interrupt, saying that since Reigns isn’t here very often, he doesn’t represent the titles and doesn’t deserve to be champion. Reigns is aghast but McIntyre says it’s easy when Reigns has Paul Heyman and the Usos. Right now though, McIntyre sees fear in Reigns’ eyes because Reigns is just a man and a man who McIntyre can tear apart.

The fight is on and Reigns gets suplexed but the Claymore hits…..Sami Zayn, who runs in to take the shot. Reigns hits the Superman Punch but the Claymore cuts off the spear (despite the camera angle showing that McIntyre COMPLETELY missed by a good four inches) to end the show. 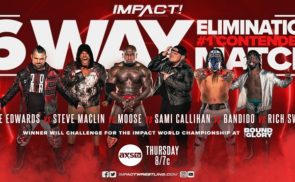