And then everything changed as Drew McIntyre was diagnosed with the Coronavirus, meaning that whatever was planned for this week has been thrown out the window in exchange for something to be named later. We have a few more weeks to go before the Royal Rumble and now they are going to need to have a backup plan just in case. Let’s get to it.

Here’s HHH to get things going, complete with soaking in the canned cheers Before he can get very far, Randy Orton cuts him off. Orton says the office is here to do what Drew McIntyre couldn’t do. HHH confirms that Orton vs. McIntyre isn’t happening tonight so HHH has two options: make Orton #30 in the Royal Rumble or just hand him the WWE Title right now.

HHH says Orton is only going to be champion if he wins the Royal Rumble. The threats start but HHH doesn’t want to hear them because he’s glad to have the old Randy Orton back. He saw Orton light Bray Wyatt on fire and was never prouder, because he would have done the same thing.

At the same time though, HHH doesn’t understand Orton’s obsession with destroying legends like Big Show, Mark Henry, Shawn Michaels and Ric Flair. Why do it when it doesn’t even benefit you? All that did was take the pride away because it shows that Orton is a no good pr***.

Orton asks if HHH has it in him one more time, but HHH says no because there is no benefit to him. Before HHH leaves, Orton asks if that is because Stephanie isn’t here tonight so HHH can’t get his testicular fortitude out of her purse. A right hand puts Orton on the floor and he smiles, saying that must be a yes.

We look back at Ric Flair costing Charlotte a tag match last week.

Charlotte doesn’t want to talk about Ric, because Lacey Evans isn’t the first or last woman to hit on him. She doesn’t understand why we’re talking about her dad when she is about to wrestle a match in 2021, meaning it’s time to go to the ring.

Lacey Evans says Charlotte needs to have a sweet tea on the front porch. Ric Flair liked the flirting last week and Lacey could go for that kind of sugar. She dedicates the match to Ric and blows him a kiss, complete with a bit of swooning.

Drew McIntyre joins us via video and says that it’s true he has been diagnosed with Coronavirus. He’s one of the people with no symptoms, but if he can get it, anyone can. So wear your masks and practice social distancing, and he’ll be back really soon.

Charlotte knocks her down to start as commentary shifts into Royal Rumble hype. The Figure Four Necklock goes on with Lacey’s face being rammed into the mat and Charlotte rolls her over a few times. Charlotte takes it into the corner to crash down onto the knee but Lacey bails to the floor. Cue Ric Flair, who is looking rather happy, as we take a break.

Back with Charlotte hitting some shoulders in the corner but Lacey knocks her down, throws in a strut, and drives Charlotte’s head into the mat. Charlotte fights back up and hits a clothesline into the neckbreaker. Lacey gets booted in the face and Natural Selection connects, but Flair puts the boot on the rope. Flair says he isn’t home and he’s not staying home before tripping Charlotte on a suplex attempt. He even holds the leg down so Lacey can get the pin at 12:24.

Post break Lacey and Ric head to the hotel.

Sheamus compliments Lee on his effort last week but Lee doesn’t want to hear it. Cue Miz and Morrison to brag about the briefcase so Sheamus calls them Dumb and Dumber. The match is made for later.

Actually hang on as Elias says he got hurt in the recording studio, so Jaxson Ryker is taking his place.

Ryker says Elias uses his music to create, but Ryker is going to destroy. Jeff gets stomped in the corner but avoids a charge. The Twist of Fate (swinging neckbreaker in this case) connects but Elias offers a distraction so Ryker can grab a rollup with pants for the pin at 48 seconds.

Post match Hardy tells Elias to bring it so Elias tells Ryker not to interfere.

Joined in progress with Hardy kneeing him down but having the Twist of Fate broken up. The Whisper in the Wind gives Hardy two but Elias’ jumping knee into a swinging neckbreaker gets the same. Hardy is back up with the Twist of Fate and the Swanton connects for the pin at 3:56.

We look at Orton/HHH again.

Morrison’s headlock doesn’t work on Sheamus, who takes him down with a drop toehold. Lee comes in to work on Morrison’s arm but a quick forearm allows the tag to Miz. Morrison is tossed onto Miz on the floor and it’s back to Sheamus for a double clothesline off the apron. Back in and Lee sends Morrison flying, followed by a hard whip into the corner. That’s enough to break the turnbuckle so we take a break.

We come back with the turnbuckle repairman earning his pair and Lee whipping Miz into the same corner. This one doesn’t work as well so Sheamus knocks Morrison off the apron. That’s enough of a distraction for Miz to get one off his DDT, setting up some left hands. Morrison grabs a chinlock but has to switch to a gator roll to keep Morrison away from Lee.

A big boot rocks Sheamus but he hit the Irish Curse to cut Miz off. Lee comes in to start running people over with the big shoulders before just throwing Morrison at Miz. Morrison’s Flying Chuck is knocked out of the air but Sheamus tags himself back in to hit the Brogue Kick for the pin at 12:54.

HHH talks about how Randy Orton insulted Ric Flair and yeah, he’ll fight Orton tonight. He’s here in a business capacity, but he’ll fight because he wants to know if he would have lit the match.

They chop it out to start with Lee getting the better of things, only to be sent out to the floor. Lee suplexes him into the timekeeper’s area but Sheamus dives back in at nine. Sheamus sends him shoulder first into the post and starts stomping away on the arm to keep Lee down.

We look at the end of last week’s show, with Goldberg challenging Drew McIntyre for the Royal Rumble title match.

Drew talks about how he was surprised by Goldberg last week. He and his brother were both Goldberg fans growing up but Goldberg messed with his legacy last week. Goldberg put words in his mouth and then said Drew was thinking them. Drew respects the legends and if Goldberg wants to prove something, they’re on for the Royal Rumble. Goldberg is next.

Riddle compares winning the US Title to eating a pizza with a lot of cheese as the Lucha House Party is rather confused. They tell him to watch his back, but he thinks that’s impossible.

Woods is on his own (saying Kofi Kingston is injured) and T-Bar (with the rest of Retribution) shoves him around to start. A heck of a clothesline gives T-Bar two and we hit the nerve hold. Woods fights up and chops away before avoiding a charge in the corner. There’s an enziguri to rock T-Bar again, followed by a missile dropkick to the floor. Mace offers a distraction so T-Bar can work on Woods’ arm, setting up Feast Your Eyes (now known as Eyes Wide Shut) for the pin at 3:53.

Orton is ready to channel his hatred into beating HHH.

US Title: Riddle vs. Bobby Lashley

Lashley, with MVP, is defending and jumps Riddle before the bell. Riddle confirms he can go so we officially start, despite his mouth being busted open. Lashley drops him ribs first onto the top rope to send things outside but Riddle is right back with a Floating Bro to the floor. Back in and the Final Flash is countered into a spinebuster as Lashley is getting fired up. The Hurt Lock goes on and Riddle taps at 1:59.

Post match Riddle says he wants MVP, who is game for a fight of his own.

MVP is in street clothes but is fine enough to hit Ballin for two. Riddle fights back with the forearms in the corner but Lashley comes in with the spear for the DQ at 1:23.

Result: Riddle b. MVP via DQ when Bobby Lashley interfered (1:23)

AJ Styles talks to Pearce and says if he catches lightning in a bottle, he can face AJ at Wrestlemania and lose the Universal Title. Drew Gulak pops up to ask to be in the Royal Rumble, but Pearce says Drew can’t just put himself in. Gulak: “Why not? AJ did.” AJ asks who Gulak has beaten so Gulak pulls out a flash drive of his victories. Instead Pearce says Gulak is in if he can beat AJ next.

Omos is here with Styles. Gulak starts fast with a rollup for two, followed by a tiger driver for the same. Back up and AJ scores with the Pele kick before shoving Gulak over the top to the floor. Omos puts his foot down next to Gulak’s face until AJ comes over to throw him back inside. The Phenomenal Forearm finishes Gulak at 3:11.

Keith Lee offers HHH his services against Randy Orton but HHH has this. Lee hands him his leather jacket.

Mandy and Dana are both in the Rumble. Dana’s headlock on Shayna doesn’t work so well as Nia tags herself in and runs Dana over. The chinlock doesn’t last long as Dana fights up and brings in Mandy. Shayna is driven into the corner but Nia gets in a cheap shot to cut her off again. The Samoan drop gets two as Dana makes the save so Baszler grabs the Kirifuda Clutch for the tap at 3:20.

HHH is in street clothes and we have neither a bell nor a referee. They slug it out to start with Orton getting the better of things before heading outside. HHH whips him into the steps and then near the announcers’ table to take over. That means it’s sledgehammer time, but then the lights start going out. HHH pulls back the sledgehammer….which is now on fire. The lights go out and HHH disappears but we’ve got a distorted version of the Firefly Fun House theme. Cue Alexa Bliss in the corner and she throws a huge fireball at Orton’s face. Orton holds his face and screams a lot to end the show. 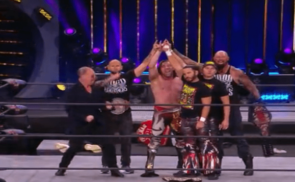