MLW took over the Super Series last week and this time around it’s Injustice’s chance to win some titles. The big main event is for the AAA Trios Titles, which could be a heck of a match as Injustice can do well in the ring. I’m not sure what to expect from this show but it should be rather energized. Let’s get to it.

Injustice knew they’d get here and they’re ready to win some gold.

This is not part of the Super Series. Destiny and company have an unnamed woman with them. And no it’s not that Tito Santana. Cota and company headscissors the other three to the floor setting up the triple dives to put everyone down. Fantastick hurricanranas Brava into the corner as commentary doesn’t seem to know who is who.

A Code Red gets two on Santana and it’s Cota coming in to dropkick Star. Everything breaks down with Star getting catapulted into a chair shot to the head (well the arms in front of the head so it’s not as bad). Star gets thrown over the barricade and through a bunch of chairs, followed by a double basement dropkick to the masked face.

Back from a break with Brava hitting an Alberto double stomp on Fantastick for two with Star making the save. A crucifix bomb hits Star with Destiny making her own save. Destiny grabs the Lethal Injection for two on Cota as everything breaks down one more time.

A dropkick and Canadian Destroyer give Cota and company a triple near fall, leaving Destiny to put Brava on the barricade. The suicide dive crushes him so Santana and Cota take out Fantastick and Santana with their own suicide dives. The unnamed woman goes up top for a corkscrew dive onto Fantastick and Star. Back in and a frog splash finishes Star at 10:55.

Holliday and Alexander Hammerstone go to Savio Vega’s childhood house, which Holliday has purchased. He has the Caribbean Title and the title to the house, making him Richie Two Titles. They don’t like the smell around here though so they’re out.

Pillman wants Jordan Oliver in a hair vs. hair match.

And now, more Cooking With LA Park, plus his sons for some bonuses. It’s pork day, and Park wants Psycho Clown to pay attention because Park has the recipe for PAIN. After a promo on Pagano coming to MLW, Park is ready to cook. We start with a hint of blubber but hold on because Park needs to rant about the clowns embarrassing America. With that heating up, it’s time to fry the father of Psycho Clown: Super Porky.

The sons have cut up the “tomatoes, onions and other gimmicks”, allowing Park to yell about Psycho Clown needing to work hard in MLW. We flash forward to the sons talking about how the family eats like champions. Park adds the sausage, bacon and pork, followed by the chopped steak. As that cooks, Park talks about how the Parks want all the MLW titles. Their next target is Konnan, who is bringing the clowns for the Parks to conquer.

Now they add salt, pepper and garlic, the latter is good for the blood pressure of obese wrestlers. Park adds in more sausage, which is WAY better than American sausage you see. Onions and tomatoes are added and, after that cooks a bit, it’s time for tomato juice and water. Finally it’s the seasoning cubes and flour tortillas…..and the feed cuts out.

Video on the Super Series. MLW is up 4-2, meaning AAA can only tie.

We look at the Hammerstone vs. Mance Warner brawl from two weeks ago.

Warner doesn’t like Holliday buying Savio’s house but he’ll deal with him later. As for Hammerstone, he can get all the candy he wants in Mexico but he’s still got knees that can be hit with a baseball bat. He doesn’t care how big Hammerstone is because he has heart. This is for the people at home and he isn’t quitting. They’ll fight soon.

Jinetes (Myzteziz Jr./Octagon Jr./Vikingo) are defending and Injustice throws tortillas to the crowd. It’s a superkick off to start with Reed and Vikingo being the only ones left standing. Vikingo goes up top for a rope walk hurricanrana but Reed flips to his feet for a nice counter. Vikingo flips out of Reed’s hurricanrana so Oliver is back up to kick Vikingo in the face. Myzteziz is back in for a knee to Oliver’s face and a springboard corkscrew plancha. Octagon and Brazil come in for the flip off until the champs come in to triple team Brazil in the corner.

Vikingo pops Brazil into the air for a heck of a missile dropkick from Octagon (that was awesome) for two as Reed makes the save. A Codebreaker into a wheelbarrow suplex into a shooting star press gets two on Reed with Oliver making the save this time around. That leaves Oliver to get beaten up for a change until Reed and Oliver comes back in to bail him out.

A double spinebuster/German suplex combination plants Myzteziz and it’s a neckbreaker into a backbreaker for two on Vikingo. The champs are sent outside again and a big suicide dive hits Octagon. Myzteziz and Vikingo are back in for their own dives, followed by the springboard corkscrew dive from Octagon for a bigger crash.

Back in and two of the three 450s miss with the third one hitting knees to give Brazil two. Oliver gets an ugly German suplex on Vikingo and Brazil hits a big flip dive to take him out again. Reed hits the great running over the top cutter on Octagon to the floor, leaving Myzteziz to get caught in a double Crossface/Boston crab combination.

Cue Brian Pillman Jr. to spit beer in Brazil’s face so the champs are back up with superkicks. Pillman isn’t done as he takes the chair away from Brazil, leaving Vikingo to hit an Asai moonsault. Myzteziz adds a big dive of his own, followed by Octagon hitting an inverted Swanton for the pin to retain at 13:45.

Two Matches Added To Money In The Bank 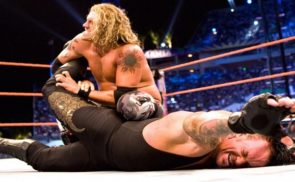