It’s the go home show for Money in the Bank and I’m not sure what else there is to set up. Part of the problem over the last few weeks is building up to a show that is centered around something likely to take place later. That isn’t exactly a thrilling destination, and the TV leading up to it hasn’t been all that strong either. Maybe things can change next week, but this could be a rough one to finish the build. Let’s get to it.

Mandy Rose, with Otis, and Sonya Deville, with Dolph Ziggler, are warming up for their match.

Mandy has a bad leg coming in but goes straight at Sonya in the corner and hammers away. It works so well that she does it again, sending Sonya bailing to the floor. Back in and Sonya hits a running knee for two and we hit the bodyscissors with Sonya shouting about how embarrassed Mandy should be. They head outside with Mandy sending her into the steps and then over the announcers’ table for a big crash. Back in and Mandy loads up the Bed of Roses but Sonya reverses into a rollup with trunks for the pin at 5:02.

Jaxson Ryker is here with the Sons. Miz and Kofi start things off but everything breaks down in a hurry. The villains are sent to the floor and it’s a dive from everyone not named Big E. to take them out. Back from a break with Blake stomping on Big E. in the corner until it’s reversed into an abdominal stretch. The Warrior Splash connects and the House Parts adds three splashes of their own for two.

Kofi comes back in with a top rope stomp to the arm, only to miss a splash into the post. Miz comes in to stomp away, setting up Morrison’s hard running knee to the face. Now it’s Kofi being sent outside for a suicide dive and we take a break. Back again with Morrison hammering on Kofi but Miz gets kicked away….so the Sons pulls everyone to the floor to prevent the hot tag. SOS plants Miz though and it’s the hot tag to bring in Gran Metalik for a springboard flipping seated senton.

Dorado adds a spike hurricanrana into a 450 but the Sons make the save. The Midnight Hour is broken up and it’s the double stomp/reverse DDT combination on the floor to plant Big E. Back in and Dorado gets some rollups for two on Morrison but a backflip Samoan drop (geez) plants Dorado right back. Starship Pain misses and it’s a reverse hurricanrana to Morrison, only to have Miz slip in for the Skull Crushing Finale and the pin at 17:58.

King Corbin is ready to team with Cesaro and Shinsuke Nakamura tonight but he’s looking forward to Sunday. He wants to see how far Rey Mysterio can fly off the roof and knows that Otis will clog the elevator like he clogs his arteries.

Here’s Jeff Hardy for a chat. He’s worked hard to get back here and can still hear the fans in his head. Sheamus is watching in the back and can’t believe this is what he was waiting on for all these weeks. Jeff says he can’t believe Sheamus didn’t interrupt him yet so here’s Sheamus right on cue. Sheamus doesn’t want to hear about Hardy, who has been around forever and done everything around here, wanting one more run. The fans are tired of him and his suspensions, releases and no shows.

Above all else though, they’re tired of the wasted potential. Jeff calls him a hater but Sheamus says he’s really a fan. When is the real Jeff coming back? Jeff says he should ask the same thing about Sheamus, who says Jeff’s flame has barely been burning for too long. Sheamus comes to the ring to extinguish it for good and the fight is on. Jeff slugs away and hits a Whisper in the Wind into the Twist of Fate. The Swanton connects and shouting on the ropes ensues.

Here’s Braun Strowman for a chat. It’s true that he debuted as part of the Wyatt Family but now he’s his own man. Now Bray has been sending him presents to remind him of the past but if Bray has something to say to him, come do it to his face. Cue Bray, with a very enthusiastic “HI BRAUN!”

Daniel Bryan and Drew Gulak have a chat with Otis.

Sasha and Bayley play Rock Paper Scissors to decide who starts so Tamina clotheslines them out to the floor. Bayley winds up starting and kicks Tamina into the corner, only to get thrown down with ease. A Sasha distraction lets Bayley get in a shot to the leg and the double teaming begins. Lacey cuts Bayley off on the floor so Tamina can grab her by the hair. Since Tamina isn’t that good though, Bayley snaps Tamina’s throat across the top and we take a break.

Back with a double elbow getting two on Lacey but she’s over for the hot tag to Tamina anyway. Bayley gets crushed in the corner but the top rope splash misses. The Bayley to Belly plants Tamina and it’s the top rope elbow for two. Lacey comes back in with the Woman’s Right to Sasha, setting up the superkick to Bayley. Tamina hits the Samoan drop to finish Bayley at 13:54.

Here’s a tour of the WWE corporate headquarters.

Dana Brooke and Carmella are ready to win the ladder match.

The Hacker pops up to show us some clips of people getting ready for Money in the Bank. He also plays a voicemail from a woman saying that not only is it coming, but it is coming soon. The Truth Will Be Heard.

The mystery partner is…..Otis. Bryan front facelocks Corbin to start and brings it in to Gulak for a running dropkick. Cesaro comes in and gets planted with a powerslam for two. It’s off to Otis to wreck things, including a running corner splash to Nakamura. The good guys clear the ring and we take a break.

Back with Bryan flipping out of Corbin’s suplex and bringing in Gulak to slug away on Cesaro. Gulak flips out of the corner into some weird chickenwing/Crossface combination until Cesaro powers out. A clothesline puts Cesaro on the floor it’s the Gulock on Corbin until Nakamura makes the save. Otis comes in and jiggles off Cesaro’s shots to the face. Corbin sends Cesaro outside but walks into a middle rope clothesline for two. Not that it matters as Deep Six finishes Gulak at 10:49.

Post match the brawl is on again with Corbin setting up a ladder. A mini ladder match breaks out with everyone involved with Sunday’s match trying to climb. Corbin shoves Bryan off the ladder and onto Otis before pulling down the briefcase to end the show. 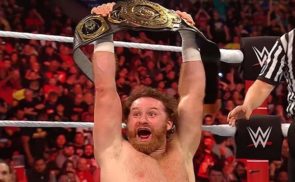 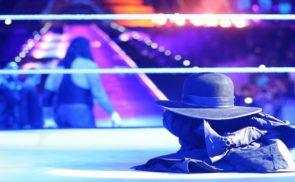