That’s a different way of looking at things. There has never been anything in wrestling like the Undertaker’s Streak and there never will be again. It is one of the most unbelievable things to ever take place in professional wrestling and it will never be replicated. The night the Streak was broken is one of the biggest shocks in wrestling history, but what if it had happened earlier?

The Undertaker’s WrestleMania opponents are a who’s who of wrestling. There are all kinds of Hall of Famers and World Champions included and Undertaker has won multiple World Titles at the show. One of those moments was at WrestleMania 24 when he defeated Edge in the main event. That was another major victory, but it might not have been the original plans.

The New York Post interviewed Undertaker’s wife Michelle McCool to promote the Last Ride documentary on the WWE Network. During the interview, McCool mentioned that the original plans called for Edge to end the Streak in 2008 at WrestleMania 24. In response, McCool said that Edge’s reaction was “‘That makes zero sense. I don’t want to do that. Why would I do that? The fans already love him. What’s it gonna do for Edge?’”. McCool said that was the only time she knew of someone being considered to break the Streak until Brock Lesnar ended it in 2014. The Last Ride premiers Sunday night on the WWE Network.

Which would have been better? Check out the two WrestleMania matches:

Who should have ended the Streak? Did you like how it was broken? Let us know in the comments below. 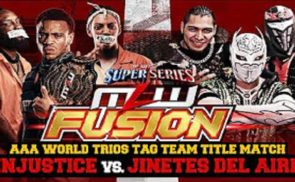