It’s the go home show for WarGames and they’ve gotten better about setting things up for the bigger shows. The big main event this week is Tom Lawlor vs. Jake Hager as part of the Team Filthy vs. Stud Stable feud, which has been about as one sided you can get while still calling it a feud. Let’s get to it.

We open with a long recap of the Stud Stable vs. Team Filthy feud.

Striker runs down the card.

The fans certainly like Hart. Ortagun decides to pose on the ropes to start so Teddy pulls him down for a stomping as the announcers talk about the referee being biased against Canadians. It’s off to something like a Rings of Saturn but Hart fishhooks him for a bonus. Back up and Hart yells at the referee a bit, as is his custom. An electric chair backstabber looks great and Ortagun is in big trouble. Hart puts on an armbar but turns it into a hanging DDT. Project Ciampa finishes the squash at 3:43.

This is Gotch’s Prize Fight Challenge with the prize up to $500. Pierce is a boxer, complete with corner man and gloves. Gotch takes him down with ease and the cradle piledriver is good for the pin at 26 seconds.

Abyss is happy to be part of the cocktail of pain that is Team Callihan at WarGames. He loves war and loves games so he can’t wait to get his hands on every member of Team Strickland.

Low Ki narrates a video about Konnan coming to MLW and stealing Salina de la Renta’s talent. That puts a bounty on his head and it’s time for Pentagon Jr. and Rey Fenix to pay for Konnan’s actions.

WarGames rundown, including an explanation of how WarGames works. Also announced for the show: Joey Ryan/Taya Valkyrie vs. Maxwell Jacob Friedman/Aria Blake.

They used to be partners but couldn’t get along. Yuta is tired of hearing Cade run his mouth and is ready to shut him up before going after the Middleweight Title. Cade says the only thing to be determined is how bad he destroys Yuta. A cheap shot from Cade doesn’t go well as Yuta knocks him to the floor and hits the suicide dive.

Back in and Yuta hits a top rope chop to the head as the announcers talk about how hard it must have been for Cade to make Yuta angry. Cade uses the referee as a shield and kicks Yuta in the face to take over. Some standing on Yuta’s head lets Cade talk trash and we hit the chinlock. Back up and Yuta hits a springboard missile dropkick, followed by something like a Blue Thunder Bomb for two.

The STF goes on but Cade crawls over to the ropes for the save. A reverse Death Valley Driver gives Cade two but he gets caught on top. Yuta grabs a HARD top rope superplex, throwing Cade so hard that he lands before Yuta, making the crash even worse. A slugout goes to Yuta and Cade seems to be out with the referee throwing up the X. Cue Rhett Giddins from behind to clothesline the heck out of Yuta, allowing Cade to pop up for the pin at 9:56.

Teddy Hart is with the Hart Foundation when Kevin Sullivan comes in to praise Teddy for being innovative, but Hart doesn’t want to hear it. Smith doesn’t want to hear about it and Hart tells Pillman to pick a side already. Hart yells at Sullivan for not doing anything in the ring but Pillman says it’s about protecting him. That’s enough as Smith and Hart beat Sullivan down and bust him open. Hart tells Pillman to pick a side so Pillman hits Sullivan with the cane. He respects Sullivan but doesn’t like him.

His daddy would be proud. 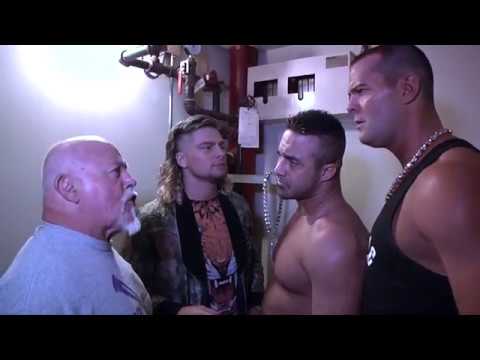 Tale of the tape on the main event.

Feeling out process to start with Hager taking him up against the ropes and then down to the mat. Lawlor’s rear naked choke is broken up with a ram into the corner, followed by a good looking beal across the ring. Another beal continues the dominance and it’s off to a headlock. Lawlor is back with a belly to back suplex and a spinwheel kick but Hager powers out. Some right hands in the corner have Hager in trouble so he throws Lawlor off the top and out to the floor.

The fans aren’t pleased with Hager as he stomps away back inside and cranks on both arms at once. Lawlor fights out but falls down, allowing Hager to get a quick two. A chinlock keeps Lawlor in trouble but he fights to his feet and scores with a discus lariat. The fans are behind him but he charges into the Hager Bomb, with Hager being stunned on the kickout.

Lawlor gets sat on top, only to catch Hager in the triangle choke over the ropes as you might have seen coming. Another armbar is broken up as Hager rolls into the ropes but they head outside with Lawlor in full control. Hager’s arm gets caught in a chair with Lawlor kicking him in the chest, followed by an exploder suplex back inside. There’s a pumphandle suplex but Hager blocks the rear naked choke.

Colonel Parker is LIVID over a choke being allowed so Lawlor switches to an incomplete cross armbreaker. Hager reverses that into the ankle lock but Lawlor rolls out again. That’s enough for Hager, who unloads with right hands to the head. The referee gets shoved away so Lawlor pokes Hager in the eye and grabs a rollup for the pin at 13:45.

If you liked the sound of this show, you can check out the full thing for free right here. 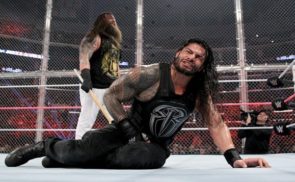