Things have been getting a little bit better around WWE as of late and maybe we can see something better on this show as a result. Last week’s was pretty good and I’m curious to see what they can put together again. I have no reason for it to go anywhere, but maybe I can have a little hope. Let’s get to it.

The Ninjas are here too. Tozawa talks about ninja power to start so Ali headlocks him. An armdrag into an armbar has Tozawa in more trouble and a clothesline puts him on the floor. The Ninjas surround him and Tozawa dons a mask, meaning the Ninjas can surround the ring in secrecy. A Ninja, presumably Tozawa, comes back in and takes over before unmasking as…Tozawa.

Ali gets knocked down to set up the chinlock and a neckbreaker gets two. Some elbows to the neck set up an abdominal stretch and Ali is sent into the corner. The ninja shouting earns Tozawa a DDT and there’s the rolling X Factor. The Ninjas offer a distraction to break up the 450 so Ali superkicks Tozawa down and hits a Michinoku Driver for the pin at 5:36.

We look at Roman Reigns joining forces with Paul Heyman and winning the Universal Title.

Here are Reigns and Heyman to get things going. Heyman says as soon as you thought he was out, Reigns pulled him back in. Reigns is the one corrupting him and pulled Heyman back in from the ocean of obscurity. Now he is back on the island of relevancy because they did the same thing to Heyman that they did to Reigns. What happened to the thank yous and the appreciation?

Reigns over delivered during his life threatening illness and no one offered him any thanks. When Reigns needed some time off, they made him give up his title. A Fiend or a monster isn’t born to reign. Imagine turning on Fox News and seeing an interview with a growling man as champion. Roman’s reign as your champion has always been defined as what WWE wants you to like: family, tradition and legacy. Tonight there is a four way to crown a new sacrificial lamb.

Heyman isn’t going to say their names because he’ll let Anderson Cooper and Carmella’s latest boyfriend handle that. Heyman is outside council to your Undisputed Universal Champion, Roman Reigns. Roman says he is a man of his word and did exactly what he said he was going to do: he signed the contract, wrecked the other two and left as Universal Heavyweight Champion. He’ll face whoever wins tonight and all he has to do is show up and win.

Matt Riddle vs. King Corbin vs. Sheamus vs. Jey Uso

For the shot at Clash and we’re finally ready to go about ten minutes after Riddle’s entrance. It’s a brawl to start with Jey superkicking Corbin to the floor and Sheamus hitting a backbreaker on Riddle. Jey comes back in for the save but gets knocked down, leaving the big guys to brawl. Riddle gets in as well and it’s a double charge in the corner to Sheamus and Corbin.

They come back with the Irish Curse and Deep Six for a double two, followed by Sheamus running Corbin over. We take a break and come back with Sheamus hitting the forearms to Jey’s chest but Riddle is back up with strikes of his own. An exploder suplex into the Broton has Sheamus in trouble but he pulls Riddle into the Cloverleaf. Jey makes the save and hits some running Umaga Attacks to both of them in the corner.

Corbin gets in a cheap shot on Jey but Riddle and Sheamus throw Corbin over the barricade. Jey dives onto Sheamus and Riddle for the double knockdown but Corbin is back up to throw Uso into the video screens. The other three get back in and Sheamus Brogue Kicks Corbin. The Bro To Sleep sends Sheamus outside and it’s the Floating Bro to Corbin. Jey comes back in with the Superfly Splash to Riddle for the pin at 13:18.

Post match Jey says he made the family proud too and is ready to take Roman to the Uso Penitentiary.

Here’s Randy Orton to get things going. Orton talks about earning the Clash Of Champions title shot last week and tonight, he’s ready to kick Lee in the head. We could list off everyone Orton has Punted over the years but Raw is only three hours. Last week, Orton earned the shot against Drew McIntyre but that’s assuming Drew can wrestle. We look at the three Punts to McIntyre and Orton asks what McIntyre should do. Maybe he should just forfeit the title…and here’s an ambulance. Of course McIntyre is driving and he gets straight in the ring for the Claymore.

Orton stalls on the floor to start and holds his jaw from the Claymore earlier tonight. Lee gets tired of waiting but gets his throat snapped across the top rope. Back in and Orton goes to the eye but Lee calmly blocks the RKO with straight power. Orton isn’t sure what to do so he goes outside and sends Lee into the steps. Back in and Orton grabs the chinlock, complete with a bodyscissors this time. Lee fights up again and shoves off another RKO attempt, setting up a powerslam for two. The powerbomb is loaded up but Orton slips out and hits the RKO…but turns into the Claymore from Drew McIntyre for the DQ at 6:24.

Orton is very slowly leaving as he holds his jaw. Cue McIntyre to jump him again and send him into the spare ring backstage. The third Claymore leaves Orton laying one more time.

They go for the grappling to start with Moss using the power to get the better of things. Carrillo switches to the wristlock but Moss headlocks him over. That takes us to a standoff and trash talk until Carrillo works on the arm some more. A drop toehold into the springboard wristdrag sends Moss outside and the triangle dropkick puts him down again. We take a break and come back with Moss hitting a suplex and unloading in the corner.

Moss muscles him out of the corner and plants Carrillo for two more. The chinlock with a knee in the back goes on, followed by some hard right hands to the head. We hit the abdominal stretch (Joe: “Nothing like an abdominal stretch.”) and Carrillo’s back is too banged up to hiptoss his way to freedom.

Moss shouts to Joe that Carrillo doesn’t have what he has but Carrillo is back up with a springboard elbow to the face. There’s a spinning kick to the head for two on Moss but he rolls away before the moonsault can launch. Moss forearms him on the apron and drops him throat first onto the rope. The neckbreaker finishes Carrillo at 8:04.

From Smackdown, after Nia Jax and Shayna Baszler retained the Women’s Tag Team Titles over Bayley and Sasha Banks.

Post break medics are checking on Banks…and Bayley kicks her in the head. Bayley sends her into the steps and then stomps the bad leg on the steps. Banks goes into the barricade and then back in to keep up the beating, including more kicks to the leg. Bayley yells at her a lot and then wraps a chair around the leg. Banks gets in some kicks but Bayley blasts her again and adds a bulldog driver. With Banks out cold, Bayley wraps the chair around Banks’ neck and Pillmanizes her.

The rest of the Mysterios are at ringside and it’s a street fight so Dominik has a kendo stick. Murphy knees him in the face to start though and Dominik is in trouble early. They head outside with Dominik getting in some shots to the face and they head up near the stage. Dominik climbs onto the video screens and hits a big dive to take Murphy down as we take a break.

Back with Dominik slugging away until they brawl up towards the stage. That goes nowhere so they wind up back at ringside with Murphy ramming Dominik head first into the ramp. Dominik is fine enough to block the eye into the steps but gets dropped ribs first onto the barricade. Some chairs to the back have Dominik in more trouble and we hit the seated abdominal stretch.

That’s broken up with a hiptoss to the floor but Murphy is right back in to tie Dominik in the ropes. It’s time for the kendo stick but Rey pulls it away. Angie and Aliyah get Dominik free and he hits a sunset bomb through a table at ringside. Now it’s Murphy being tied up in the ropes and all four of the Mysterios beat on him with the kendo sticks until Murphy quits at 14:12.

Post match the beating continues to end the show. 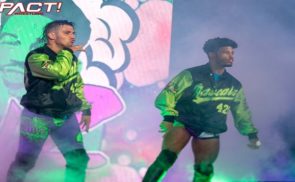