At least there is a reason. There are a lot of legends in wrestling and some of them are able to do things after their in-ring careers are over. Some of them are able to become trainers or producers, while others do something in front of the camera. That is something that can do a lot of good for both sides, but one such legend recently turned down a chance to come back to television. There was a good reason for that.

Kurt Angle was on WWE TV quite a bit last week, appearing both on NXT and SmackDown. Angle refereed Matt Riddle vs. Timothy Thatcher on NXT, followed by officially introducing Riddle as part of the SmackDown audience on SmackDown. That is quite the association with Riddle and it turns out that WWE wanted more from the two. Angle turned them down and had a good reason to do so.

In an interview with Sports Illustrated, Angle explained why he turned down WWE’s offer to manage Riddle. Angle has been focusing on rehabbing his body and getting back in better health, along with running his his new business, Physically Fit Nutrition. Rather than getting back on the road, Angle needs more time to devote to his business, which is growing in popularity and needs his attention. Angle said that if he did manage Riddle, he would eventually face Riddle in a match and if he ever wrestled again, that is the direction he would have taken.

Angle has been busy as of late. Check out what he was doing last week:

Opinion: I can go with something like this and it is a good sign for Angle’s future that he is willing to slow down a bit. Angle is known as someone who will keep going no matter what with reckless abandon. Thankfully he seems to be calming down a bit and getting involved in something that doesn’t possibly injure his body even further. That is long overdue and hopefully he is happy with what he is doing.

Would you want to see Angle vs. Riddle? Will Angle ever wrestle again? Let us know in the comments below.

Another Top NXT Talent May Be Called Up Soon 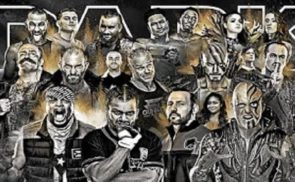