It’s the second week in Canada and we are getting ready for Hard To Kill in January. The build started over the last two weeks with Tessa Blanchard being named #1 contender to Sami Callihan’s Impact World Title. They’re setting themselves up for something historic if that is where they go and I would be interested in seeing them take that route. Let’s get to it.

Trey vs. Rohit Raju vs. Aiden Prince vs. Brent Banks vs. Willie Mack vs. Petey Williams

One fall to a finish for the #1 contendership to the X-Division Title with champion Ace Austin on commentary. Raju sends Prince and Mack to the floor, followed by the big suicide dive. Trey teases a springboard wristdrag but flip dives onto everyone outside instead. Back in and Petey hits a dropkick to Banks’ back, followed by a slingshot hurricanrana to Trey on the floor.

Mack comes back in and starts headlock takeovering Banks and Williams. A double clothesline takes them down and it’s another flip dive to take everyone out on the floor. Prince and Banks hit stereo crossbodies inside, setting up Banks’ big flip dive of his own. Raju cleans house and sends Trey outside, only to get caught by Petey’s slingshot Codebreaker. The Russian legsweep into a short Downward Spiral gives Petey two and the Sharpshooter goes on.

Mack is back in for the save and a standing moonsault to Petey so here’s Prince to break that up. The brainbuster plants Banks and it’s Prince hitting a 450 onto Banks and Williams at the same time. Mack gives him a frog splash but Raju makes the save with a top rope double stomp. Petey hits the Canadian Destroyer but Trey runs in and steals the pin at 14:15.

Rich Swann is ready to win the World Title as soon as he gets a shot. He’ll become #1 contender in next week’s five way elimination match.

Kiera Hogan is here with Madison. Hold on as Madison has to point out the LRL trunks as Callis talks about her being trained in the Dungeon and winning the WWF Title from Ric Flair in Saskatoon. Nicole’s Backstabber out of the corner is blocked and Hogan gets in a cheap shot so the chinlock can go on. Back up and they forearm it out with Nicole hitting a Backstabber. An electric chair gives Nicole two but a Hogan distraction lets Madison get in a catapult into the ropes. CrossRayne finishes Nicole at 5:27.

Aiden Prince comes up to Johnny Swinger, who declares him his young boy. Petey Williams comes in and doesn’t think much of Swinger. Prince and Williams leave so here’s Ken Shamrock to tell Swinger to take a shower.

Rob Van Dam and Katie Forbes are in the hot tub again with Katie gyrating in a swimsuit. He’ll be back in the ring next week.

They trade kicks to the face to start until Daga snaps off a hurricanrana to the floor. The spinning dive off the middle rope takes Jake down again but it’s a dragon screw legwhip over the ropes back inside. Daga blocks a DDT on the floor and snaps off a belly to belly. Back from a break with Daga fighting out of a chinlock and winning a chop off.

Something like the Last Chancery has Daga in trouble so he elbows Jake in the face for the escape. Some clotheslines set up a backbreaker into a DDT for two but Jake is right back with a Death Valley Driver. Daga’s German suplex gives him two more but Jake suplexes him into the corner. A few kicks to the face have Daga in trouble so Jake puts him on top, only to get hurricanranaed right back down. The double underhook piledriver finishes Jake at 11:31.

We get a big, serious video about Joey Ryan vs. Ken Shamrock.

Tessa charges to the ring and we’re ready to go in a hurry. Sami gets sent to the floor and Tessa tries to choke Fulton to little avail. Instead Swann hits a Phoenix splash to hit Callihan on the floor but Sami is right back in to take over on Tessa. Swann comes in instead for a bunch of clotheslines, only to have Fulton break up the handspring cutter. A hard slam gives Fulton two and Callihan drops an elbow for two.

There’s a splash to give Fulton two more and we hit the bearhug. Swann’s attempts to punch his way out earns himself a suplex and Sami comes in to show off some cockiness. The chinlock goes on for a bit but the Cactus Special attempt lets Swann crawl through the legs and make the tag to Tessa. Everything breaks down and a DDT plants Fulton but he’s back up for a powerslam/running neckbreaker combination. Swann makes a save and brings himself back in to kick Sami down. Sami tries to bring in the bat but gets it taken away, allowing Fulton to throw in the belt and knock Swann out for the pin at 10:57.

Post match Tessa gets beaten down but Brian Cage runs in for the save.

Flashback Moment of the Week: Ultimate X from Homecoming.

Johnny Swinger brags about relieving himself in Ken Shamrock’s bag, but no one seems impressed.

Taya Valkyrie yells at John E. Bravo when Jordynne Grace comes in to challenge for the title. That won’t be happening so Grace says it can be any match next week. Bravo accepts on Taya’s behalf.

Moose shows that he is a great tennis player by beating a pro named Mikey. The threats of violence may have something to do with the loss. Next week, he’ll become #1 contender.

Havok wastes no time in throwing her around to start and snaps off a German suplex. Some running hip attacks in the corner keep Moon rocked but she avoids a charge into the post. Moon gets in a few shots but jumps into a chokeslam. The Tombstone finishes the destruction at 3:58.

Post break Susie compliments Havok on her match but Havok walks away. She touches Susie’s shoulder on the way though and we get some Su Yung flashes.

North is defending. Eddie and Alexander lock up to start with Eddie taking him down in a headlock. Marufuji comes in but gets headlocked takeovered for his efforts but it’s off to Eddie to work on Page’s arm in a hurry. Some double chops put Page down until Alexander comes back in to send Marufuji into the corner. Everything breaks down though and Eddie hits a dive onto the champs as we take a break.

Back with Page getting chopped some more but he gets in a cheap shot so Alexander can knock Eddie to the floor. A catapult sends Eddie’s throat into the bottom rope and it’s a Rock Bottom backbreaker into a regular backbreaker from Page. Eddie finally gets in a suplex to take Alexander down and it’s Marufuji coming in to clean some house. A kick to Page’s head gets two but he’s back up to strike it out with Marufuji.

The assisted spinebuster doesn’t work so it’s Eddie hitting a Blue Thunder Bomb for two on Alexander. Everything breaks down again until Eddie clotheslines Page for a four way knockdown. Eddie tiger bombs Alexander for two more and the shock on the kickout is real. Page grabs Eddie’s leg so the Boston Knee Party can’t launch. Marufuji gets sent outside and it’s the double Neutralizer for two on Eddie. The assisted spinebuster gives Alexander the retaining pin at 16:43.

Yowie Wowie. Bray Wyatt’s WrestleMania Opponent Could Be A Big Rematch Or A Major Shakeup 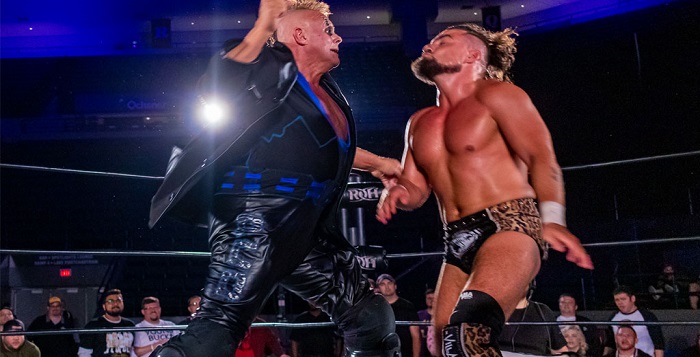