You might remember him. There are some names who are about as controversial as you can get in the world of wrestling and Enzo Amore is near the top in recent years. He is one of the best talkers this generation has ever seen but at the same time, he has managed to get himself in more trouble than he knew what to do with more than once. Amore is still around though, and now he has a little memento with him when he gets in the ring.

While Amore was certainly one of the best talkers in wrestling, his in-ring work was not so well received. That being said, the things he could accomplish on a microphone were more than enough to make him the focal point of the WWE cruiserweight division. This included a pair of reigns as the Cruiserweight Champion, but WWE stripped Amore of the title due to his failure to inform them of a sexual assault investigation (which was dropped due to insufficient evidence). However, Amore has something left over from his title reign and is using it again.

Amore, under the name Real1, has released a video to Twitter, announcing that he will be hitting the independent circuit, beginning with a tag team match on Friday, July 10. The match, Amore’s first ever independent match, will see him team with Brian Pillman Jr. against Ricky Morton and Morton’s son Kerry. In the video, Amore reveals the WWE Cruiserweight Title, which he says he will be bringing with him to every match. Since leaving WWE, Amore has only wrestled a handful of matches, all of which have included Pillman, with the most recent taking place on February 21 in Qatar.

Amore hasn’t wrestled much. Check out what he has done in the meantime:

Opinion: I wasn’t the biggest Amore fan in the world but he could certainly talk about almost anything you asked, which is one of the most important talents you can have. That is the kind of thing that can keep you employed for a long time and it would not shock me to see him back in a major promotion again one day. His talking really is that good and it’s a lot more important than what you are going to see in the ring.

What did you think of Amore? Will he ever make it back to the big time? Let us know in the comments below. 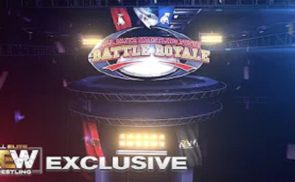