Confusing Report On Rhea Ripley In The ThunderDome

A little bit of both. The Coronavirus pandemic has shaken up the wrestling world like almost nothing else and that has made the last year plus rather rough. The biggest change has been the lack of fans, though WWE has done what they can with the Thunderdome. It might not be perfect, but at least it does all the virtual fans a way to influence the show through their reactions. One such reaction is a little different than the rest though.

The fans who appear in the virtual Thunderdome crowd are told who to cheer or boo during the show. According to Wrestling Observer Live, fans have been told to cheer Raw Women’s Champion Rhea Ripley, despite her being presented as a heel throughout her time on the main roster. Ripley teamed with Nia Jax and Shayna Baszler to win a six woman tag during this week’s show and then posed with them after the match.

Ripley made her main roster debut at the Royal Rumble and then began appearing regularly on Monday Night Raw about two months later. During her debut promo, she challenged Asuka for the Raw Women’s Title at WrestleMania 37, where she would win the title. There has been very little to suggest that she is someone fans would usually cheer, including her feud with the popular Asuka.

Opinion: This is about as WWE as you can get and I’m really not sure I understand the mentality. Wouldn’t this mean that fans are were also cheering for Jax and Baszler during this week’s show? I really don’t think that is what WWE was hoping to see, but it is kind of hard to cheer for one member of a three person team at a time. Ripley has certainly been a heel during her time on the main roster and while she has a lot of potential to be a huge fan favorite, it is very strange to see this version of her cheered.

How has Ripley done on the main roster so far? How long will she hold the title? Let us know in the comments below. 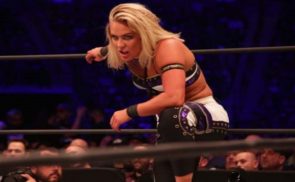