It has to happen at some point. There are very few things that wrestlers have in common, but at some point, they all have to retire. It might not seem to be the case with some of them, but every wrestler hangs up their boots at one point or another. Some of them may retire sooner than others, and that is the case with one who had all kinds of potential in front of her.

Former AEW wrestler Sadie Gibbs has announced that she has retired from wrestling via an Instagram post. Gibbs, 29 years old, has not wrestled since the October 30, 2019 edition of AEW Dark. She was released from the company on August 13, 2020 due to not being able to leave the United Kingdom due to Coronavirus restrictions. In her Instagram post, Gibbs thanked her fans and talked about her future plans with her Team Undefinable Fitness.

Opinion: This is quite the shame for fans as Gibbs was one of the most intriguing prospects that the company had in its early days. That being said, if this is what Gibbs wants to do then good for her. I’m not sure why she chose to retire, but at 29 years old, she could very easily make a return to the ring even several years down the road if she wants to. There is nothing wrong with doing what you want though, and hopefully she gets to do something that she enjoys even more than wrestling.

What did you think of Gibbs? Do you think she will wrestle again? Let us know in the comments below. 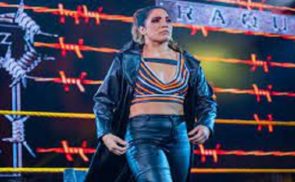