Come on over! NXT is one of the most unique promotions in the world as it has to do two things at the same time. While it serves as the official developmental program for WWE, it is also a two hour national wrestling show, meaning it has to be entertaining in its own right. That involves doing something to keep the fans coming back every week, and now it might include some guest stars.

NXT Cruiserweight Champion Kushida has sent out an Instagram post, saying that he will continue to face anyone interested in a Cruiserweight Title shot. While Kushida will not be able to defend the title this week due to a previously announced six man tag, it seems that the challenge will be taking place in the future. As a result, it seems that Kushida already has a variety of challengers lining up.

This includes a variety of wrestlers, many of whom are former title holders, including a former Cruiserweight Champion and one who does not qualify for a shot. Names such as Ivar, Buddy Murphy and Ricochet, all of whom have previously held NXT titles, have responded, with Ricochet saying “just say when”. However, there might be something that keeps the challenge from happening.

One more person might have a say in this.  Check out a former champion’s promise:

Opinion: This is the kind of thing that is perfect for someone like Kuhisda, who can have a good match with anyone. Above sll else though, just the idea of Murphy or Ricochet or even some others getting into the Cruiserweight Title hunt is nice to imagine. They have had nothing to do for so long and this would certainly be an improvement. I don’t think it happens, but it is nice to imagine.

Who accept the challenge? Who should move to NXT? Let us know in the comments below. 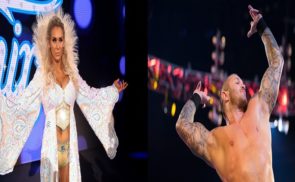