The next big step. AEW has not been around for very long now but they have already made some huge strides. The company has come a long way and is already the second biggest wrestling promotion in the world. It can be interesting to see what they have done and they continue to do going forward. That was the case again this week as AEW has made another major announcement.

This week’s edition of AEW Dynamite opened with AEW President Tony Khan announcing that he has purchased Ring of Honor Wrestling, officially making him the new owner. This comes after Ring of Honor went on hiatus in December with a planned relaunch for next month. There is no word on what Khan will do with Ring of Honor or how it is going to be tied in with AEW.

Opinion: That is a heck of a headline and I’m curious to see where it goes. That is the problem though, as I’m not sure exactly what is going on here. I would assume that Ring of Honor is the new developmental territory and that is not a bad idea. Use the name brand that you already have instead of making it another edition of Dark for a change. I’ll wait and see where this goes, but I’m cautiously optimistic, especially about that tape library.

What do you think of the announcement? How will Ring of Honor be used? Let us know in the comments below. 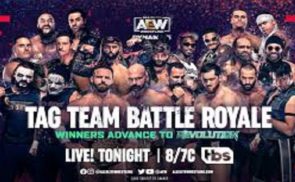