It’s week #2 of this show, or week roughly #20 if you consider this to be the revamped 205 Live that it really is. Therefore the matches aren’t going to be anything of note but we might get some slight NXT star power around here. That is almost the only way to make the show feel important, though it is hardly consistent with what it offers. Let’s get to it.

Zack Gibson is here with Drake. Quinn can’t get a grab on him against the ropes to start so Drake mocks him a bit. A hammerlock works a bit better for Quinn, who stands up so Drake’s crossbody can bounce off of him. Drake bails to the floor and a Gibson distraction lets Drake get in a cheap shot. Back in and Quinn slugs away but has to power out of a sleeper. Quinn slams him off the top but Gibson offers another distraction, allowing Drake to grab a rollup for the pin at 4:47.

Post match Quinn beats up Gibson to blow off some steam.

Legado del Fantasma is here with Lopez. Sarray tries to start fast and it’s a springboard armdrag to frustrate Lopez early on. That earns Sarray a grab of the hair and a wheelbarrow faceplant to plant her on her face. Sarray is back up with a rollup into a dropkick, setting up a double stomp. Another double stomp gets two but Sarray’s running dropkick against the ropes hits Joaquin Wilde and the distraction lets Lopez hit a spinning Dominator for the pin at 3:47.

Gacy and Kushida fight over wrist control to start with Kushida spinning around on Gacy’s back and handing it off to Jiro. After teasing a hug, the threat of the jacket punch sends Gacy backpedaling. The jacket punch connects on the second try, but it knocks Gacy into the corner for the tag off to Harland. Dominance ensues, with Harland driving him into the corner and knocking Kushida off the apron as a bonus.

It’s back to Gacy, who catches Jiro with a DDT to put him down. That doesn’t last long though as Jiro is up for the tag back to Kushida without much trouble. House is cleaned, with Kushida grabbing the Iron Octopus on Gacy. Harland makes the save but has to be held back from massacring Kushida. It’s back to Harland to run Kushida over and splash Jiro for the pin at 6:55. 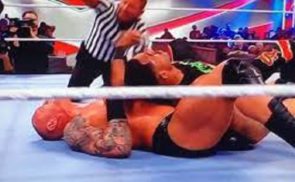